Madelyn Posey’s dream of expanding her letterpress business is manifesting right before her eyes, and her dream weighs a few tons.

“I used to be a knitter; now I’m addicted to very heavy machinery.” 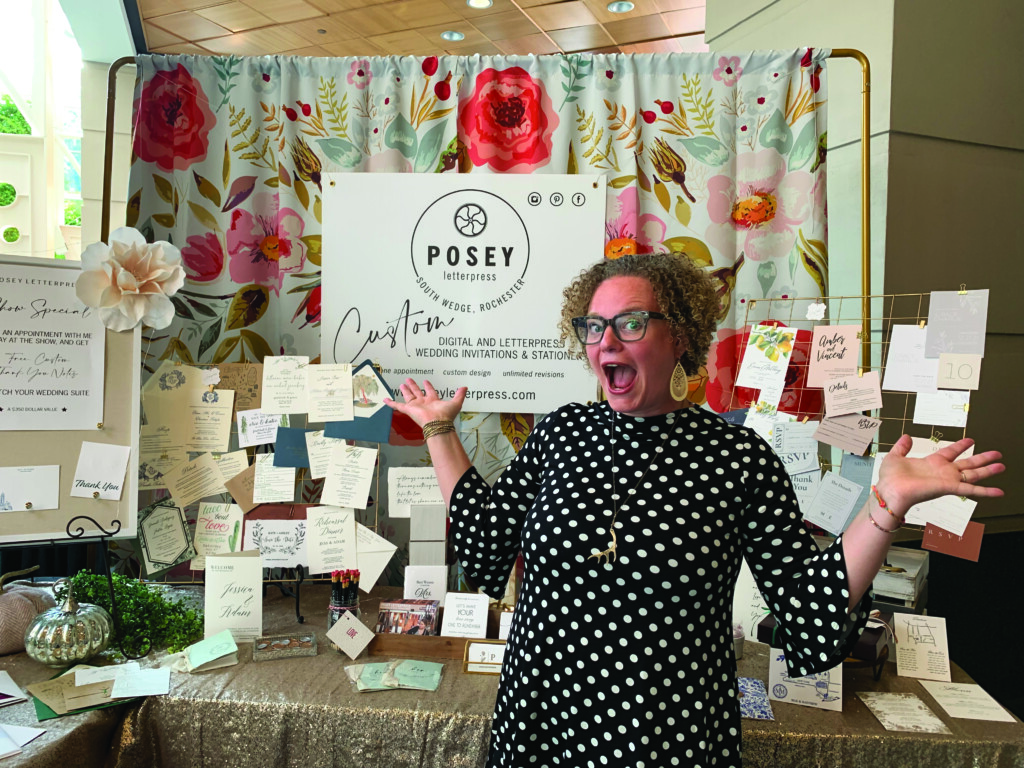 Photo by page by Katie Greenberg

Her road to letterpress printing was a winding one. The Webster native studied nursing at SUNY Brockport and for a time worked as a traveling nurse. She discovered letterpress in Pasadena, California. “It was very lonely. I didn’t know anybody,” says Posey. The isolation led her to take a class at Pasadena Armory Art Center. “I loved the smell of the ink, the process of setting type on antique machines. I loved that I could make something and take it home the same day, unlike pottery.” Back in Rochester, she worked as an ICU nurse and met Tony Zanni, owner of Type High Letterpress, in 2013.

“I told him, ‘I want to be your intern, put away type,’” Posey says. “We became fast friends.” The year was also momentous for Posey when she met and fell in love with Jennifer Posey, owner of Hedonist Artisan Chocolates in the South Wedge. On Valentine’s Day 2015, Madelyn’s future wife invited her to the office above the chocolate shop on South Avenue for a spaghetti and meatball dinner. Behind the table was a nineteenth-century table-top Old Style Golding Pearl No. 3 printing press she had purchased from Zanni.

“Jennie said she could see how letterpress printing would go with chocolate,” says Posey.

She was thinking of box inserts, tags, and stationery.

“When I saw [the press], I thought you gotta be kidding me. By then Jennie was selling thousands of boxes of chocolates, and the printer is powered by foot pedal. I’d have buns of steel after the first thousand!”

The couple married. In 2015, they opened Little Button Craft in the South Wedge, a curated gift shop that features a large selection of yarn for knitters. She also began “dabbling” in wedding invitations. They later sold the shop. The couple’s first son, Charlie Parker, was born, followed by second son, Miles Porter.

Meanwhile, Posey continued working as an ICU nurse at Highland Hospital, only leaving the job in 2020. As printer and packaging designer for the chocolate shop, she turned to Flower City Arts Center, where she could rent a printing press for Hedonist jobs. Soon she was enraptured by a handsome Vandercook No. 4.

“It’s a hand cranked, flatbed printing press, nicknamed ‘The Machine,”’ says Posey. “I would print thousands as fast as I could while I had a babysitter at home.” By 2017 Posey Letterpress was born, and now Posey ran her bespoke print and design shop in the office above the chocolate shop. Yet another letterpress printer joined the family when one Christmas, Jennifer gifted her with her very own twentieth-century Vandercook No. 4 Proof Press. The press had been saved from a salvage yard by Zanni, who is now restoring it.

“This one is completely automatic,” says Posey. “It’s like driving a stick shift car, which I do know how to drive. I took a class, and it was totally terrifying. It’s fast and efficient, and it could take your arm off. It was practice, practice, practice.”

Now Posey was up to printing 10,000 box inserts, maps, and specialized custom tags for business clients.

The couple began looking for a space of their own and wondered about a mysterious building on Mt. Hope Avenue with “a random food truck, with the name “Muchees on its side, that never went anywhere.”

“We put out feelers for the owner and in every city document there were different names and addresses,” Posey says. Suddenly last December there was a “For Sale” sign, and by February 2022, the building was theirs.

“I think of myself as The Girl Printer, and while there was a comeback in the nineties when women began to print wedding invitations and stationery, it’s still a very male-dominated field,” she says.

One year the couple drove all the way to a letterpress conference in Idaho, and Posey says she discovered that “old time male printers were teaching new printers, the majority of them women.”

Another lucky opportunity for Posey was reading an industry newsletter this summer that listed a 1946 Heidelberg Windmill looking for a new home.

“Kathryn in Niagara Falls had started Cataract Printing in the 1950s with her uncle, and she was retiring. She said I could have the printer for free; I just had to come and take it away.” Despite it being a hefty 3,000 pounds, she managed with help from professional welder Gregory Rice.

“I now own five antique printing presses, including a 4×6 Craftsman Tabletop Pilot Platen Press,” she says. “The Craftsman is just a tiny press that will be good for demonstrations, kid classes, and art fairs!”

Today Posey combines old and new technology. She creates her designs in Adobe Illustrator sends them to Boxcart Press in Syracuse, and which produces polymer, hard plastic plates that sit in a metal base. “It’s like type. Any font and size,” says Posey. “It’s New Age printing.” Posey has created a wealth of motifs and styles, from a recent “clean and modern” one that held the skyline of Rochester in the background, and others that reflect sentiments more common to the nineteenth century, like a recent wedding project colored in Delft Blue Chinoiserie. “The wedding invitation is the first glimpse families and friends will get to see what they can expect from the wedding,” says Posey. “Anyone can go online and buy wedding invitations, but they’re limited in color and font, and in a lot of ways [the process is]dumbed down. I offer a boutique, sit-down experience at a table once owned by my grandmother, and I create designs that represent individual styles. You can touch the paper, see the cool antique presses, and meet the printer.”

Posey’s letterpress addiction shows no sign of ending for the simple reason that she just loves weddings. “It’s such a happy point in our lives.”

Posey Letterpress is currently located above Hedonist Artisan Chocolates at 674 South Avenue. In spring 2023, look for her at 348 Mount Hope Avenue. 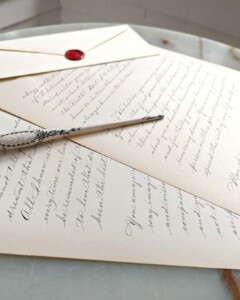 Photo provided by by Elaina DeBoard

Elaina DeBoard describes her carefully crafted calligraphy as “a love letter to whoever.” Along with wedding invitations or holiday greeting cards for local businesses, she also uses her skill for proposal letters, custom wedding vows, and family trees.

After earning her MA from Emerson College, she returned to Rochester in 2013 and took a job as an administrative assistant. Later she worked as a marketing specialist in social media and design. Two years later she discovered calligraphy.

“It was easy and inexpensive. I could start out small for under $30,” DeBoard says.

Her boyfriend, now husband, John Hawver, gave her an old calligraphy book, and it turned out to be a guide to her favorite style. “I fell in love with Spenserian penmanship that was popular in the 1900s,” says DeBoard.

Over time, DeBoard took book design classes and discovered more calligraphy styles at the Flower City Arts Center or in online classes. As her number of pens, tips and inks increased, she learned to use just the right “combo of paper and pen tip” and how to test paper to avoid letters “feathering or bleeding.”

Her earliest calligraphy jobs were for family and friends. Four years ago, she built a website and watched her business grow.

“I put a lot of time into social media and started to get referrals from clients. I think I was the right age [to start] because all my friends were getting married,” says DeBoard. Her “traditional” clients’ requests vary from wedding invitation sets to “spot calligraphy” in which a couple’s names are written in script and then digitized on standard printed invitations.

“Digitized calligraphy is not very common though,” DeBoard says. “[Couples] want a personal touch, a special font that is unique.” “The pandemic made people want smaller and more intimate weddings, and calligraphy is a luxury item,” says DeBoard. Now as canceled weddings are rescheduled, business is good.

Four months ago, she quit her full-time job, and she now works from her Highland Park neighborhood home selling both locally and on Etsy.

She also added to her catalog engraving metal and glass (“perfume bottles are the most popular objects”) using a handheld drill.

Each of DeBoard’s projects are created through the quiet, careful movement of pen and ink with the additional ingredient of love as her website attests: “My work enthusiastically celebrates and supports love of all kinds and strives to be inclusive sexuality, gender—all are welcome and embraced…love is love is love is love.” Learn more at flowercityletters.com. 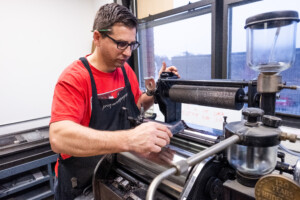 In 2001 a friend introduced Tony Zanni to Mike Kopicki, “an eccentric old man,” who had filled his Webster barn with letterpress equipment just because he could.

“I fell in love with the press, the type cuts, the dingbats,” says Zanni.

When Kopicki let him use the press, Zanni began his own hunt for more, no matter where it took him.

Zanni graduated from Rochester Institute of Technology with a degree in graphic design in 2007, and two years later he and a business partner opened Dock 2 Letter Press in Webster.

“I used old-school movable type, but I was limited to typefaces created in the shop,” Zanni says. “I tracked a big collection, and now I had five different presses and 700 pieces of type.”

A few years later the building Dock 2 rented was sold, and Zanni had to put everything in storage. By 2013, Zanni had bought his partner out and opened Type High Letterpress in Rochester’s Hungerford Building.

Zanni has advanced far beyond the small printing press he once kept in his apartment, adding a 1,500-pound Vandercook Proof Press and a hefty Windmill Heidelberg that weighs in at 2,880 pounds to his collection. His business produces an array of designs and custom print ephemera using handset type—invitations and bellybands, coasters, business stationery, greeting cards, and posters.

“For weddings, I usually use super thick paper that costs a million dollars,” says Zanni, laughing.

His work can be seen around town in art shows, including the annual Corn Hill and Clothesline Art Festivals. He’s worked with the Historical Society of Rochester in creating several greeting cards of Rochester’s historic landscapes and famous figures.

Along with his custom work, Zanni also offers workshops that “take it back to the early 1900s.” In the workshops, press newbies learn a little history; print their own work from his stash of wood type and dingbats; and experiment with paper, ink colors, and layouts while learning the proper way to set, proof, and lock up type for printing on his Vandercook Proof Press. He also continues to expand the ranks of letterpress as an adjunct professor at RIT, where he teaches “the black art of letterpress and typography.” Learn more at typehigh.com.