A tale of two lovebirds

Andrew Berreyesa and Ellen Paddock met three years ago at a wrestling meet, and it’s been a magical romance ever since that first encounter. Paddock, a former (585) magazine intern, was a student at SUNY Brockport, and Berreyesa was a student at Cornell University when they met. While dating they discovered a joint passion for hiking and traveling, so it only made sense that Berreyesa proposed to Paddock on an overlook at Letchworth State Park. 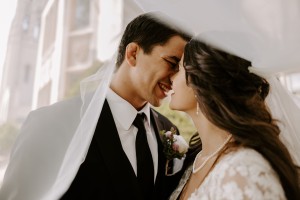 She also knew that she wanted a blusher veil. Even though some people advised her not to go with the traditional face covering, her heart was set on it. At her final fitting she asked her seamstress to “please, please get a blusher veil.” Once that was in place, she felt like a true bride.

Their wedding was a celebration of nature, fairytales, and a love that is bound to their faith. The couple chose to have their ceremony at Sacred Heart Cathedral in Rochester, Paddock’s home parish while she attended college.

“I did my faith formation classes there and I knew the pastor who officiated us well,” she says.

The couple had a full nuptial mass, which consists of several readings from the Old Testament and New Testament along with hymns and psalms. Following the ceremony, they had their reception at the Avon Century Barn, decorated with flowers from Westside Gardens in Brockport, the same flower shop where Berreyesa had often purchased flowers for Paddock before they were married. Blooming sunflowers and rolling hills made for a stunning backdrop to their big day. 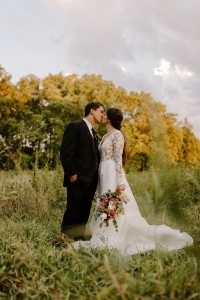 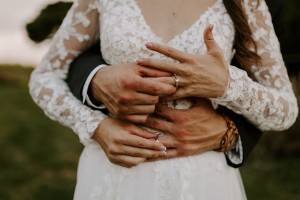 Their first dance was to “Annie’s Song,” a classic John Denver tune about nature and everlasting love, perfect for these outdooors-loving newlyweds.The weather was quite hot—it was early September— and “all the little kids had their shirts off running around, and everyone was sweating,” says Ellen. “But it was a perfect summer day, and we all had so much fun.”

Almost eight and a half years ago, Mark Chamberlin was a wallflower at his boss’s birthday party when he noticed another wallflower, Gavin Reynolds. The two got to talking, and they soon started dating. Reynolds then introduced Chamberlin to his annual summer vacation spot on Keuka Lake. Love blossomed, and they tied the knot on July 9, 2022. 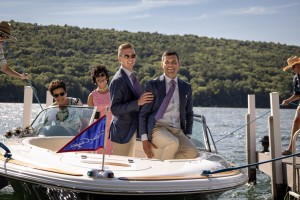 After toying around with the idea of destination weddings in the Bahamas pre-COVID, they later decided to have their wedding where they spend most of their time—right on Keuka Lake. It was perfect, since the spot holds a lot of family memories and cannot be replicated anywhere else.

“It was held where my grandparents used to live, a family property that my mom and her two sisters now own,” says Reynolds.

The couple kicked off the event by arriving to the altar by boat and popping a bottle of champagne as a remix of “Love Generation” by Bob Sinclair played.They used the dock as the aisle and the spot for their ceremony. They were led in by their dogs, who wore flower crowns. Later, they had dinner and cocktail hour in a tent on the side of the recreation hall, which they then turned into their dance floor.

“We didn’t want anything super traditional,” says Reynolds. “To have the second half of the party in the rec hall was really memorable for us because of the past events we have had there.” 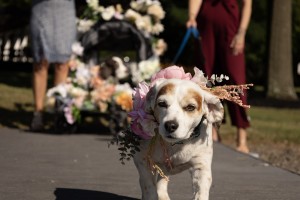 This August, the two will continue their celebration with a twelve-day trip split between Sicily and the south of France.

Chelsea Wagner and Sean Curley met five years ago during their MBA  orientation at the University of Rochester. Students in the MBA program had to take a lengthy personality test, and their compatible scores meant that they were put in the same student group and took most of their classes together. Sean would get to classes early to save Chelsea—who was usually running late—a seat. They were married on March 22, 2022. 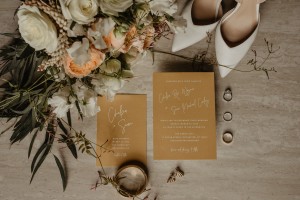 “We loved the ceremony and actually getting to be married. Rabbi Rochelle made the ceremony so special and meaningful for us and our families,” says Wagner.

The reception at the Arbor Loft was complete with nonstop dancing and a staff that made sure every guest was having the time of their lives.“Sean surprised me after dinner with a speech about how much he loves me and how excited he was to be celebrating with everyone,” says Wagner. “That was so special.” 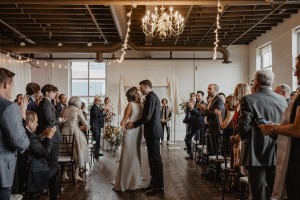 In early June, Wagner and Curley traveled to their favorite destination, Greece, for their honeymoon. “We went to Santorini in 2019 and absolutely fell in love (how could you not?) and we headed to Crete for our honeymoon,” Wagner shares. “Marinate me in olive oil and feta cheese!” 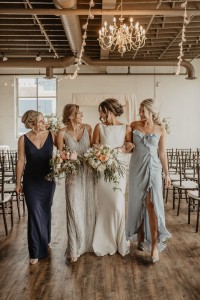 Together they own a home in Rochester. The beautiful couple have fallen in love with discovering new restaurants and breweries as well as taking their adopted dog for walks around Cobbs Hill.