We were more Indian once

At only seventeen, Sejal Shah was the first Indian American in Rochester to perform an arangetram. An arangetram is a debut performance by a student of classical South Indian dance. Preparing for this event is no easy feat. It takes training and dedication and planning. It’s an event that isn’t about just the student and teacher but also family and community.

Words and writing were just as important as dance during Shah’s teen years in Rochester. She loved going to the library and perusing the shelves of the poetry section. She’d take books home and carefully retype favorite poems and lines so that she could keep them with her.

This weave of words and dance, of movement and poetry, takes form in her new memoir This Is One Way to Dance (University of Georgia Press, June 2020). Shah’s collection of essays examines themes of identity, gender, race, love, and home and how she navigates between and among the physical and emotional spaces of her life.

Shah says dance and physical movement (she also studied ballet and modern dance) influenced her writing and artistic vision early on. One of her biggest inspirations is Rochester’s renowned choreographer Garth Fagan. Fagan is known for developing the “Fagan Technique,” which incorporates elements of Afro-Caribbean dance, ballet, and post-modern dance.

She first saw the Garth Fagan dancers as a child, and she now credits that experience with helping her develop her sense of self and her writing style.

“I saw you didn’t have to fit yourself into someone else’s forms and that you could invent your own language. You could take a leap and trust that your audience could find you. And I think that Fagan stayed with me as a kind of totem of believing in your artistic vision.”

After her undergraduate years at Wellesley College and before starting her MFA program at the University of Massachusetts Amherst, she returned to Rochester and took classes with the choreographer. The first chapter of her book is titled “Prelude,” inreference to her favorite dance by the company, “Prelude: Discipline Is Freedom.”

“I saw that you could invent your own language; you just had to train and believe,” she writes.

Shah’s book has made an impression on those who have read it. Wendy Call, a Seattle-based writer, edited the collection for Shah.

“There are several reasons to read the book,” remarks Call. “One is to just enjoy the ways in which Sejal presents several decades of her life. It’s almost like she’s trying on different lenses with the different essays. And one of the things I really like about the book is that they function sort of like a kaleidoscope where there are these elements of her life that appear and reappear: her work as a teacher or her work as a writer, her practice as a dancer at different times in her life, relationships or primary relationships with her brother, with her parents, with her grandmother, with close friends. Those sort of appear and reappear in different configurations, and they’re all really beautiful.”

Shah wrote these essays over the course of twenty years, and each essay is like a glorious colored shard of glass in the kaleidoscope. With each turn of the tumbler a rainbow of lyrical essays allows the onlooker to see and experience Shah’s life at different points in time and space. Poetry, memoir, and lyrical essays intersectand play off of each other throughout the collection.

Local writer Nadia Ghent is a long-time writing student and friend of Shah’s who read the book and provided feedback on early drafts. She, like Call, appreciates the variety of lenses Shah uses to tell her story.

“It was just such a monumental work. There was just so much in it. It was such a journey through so many different kinds of ways to write, all circlingaround some of the very central themes of identity and connection.”

Ghent rightly points out the central theme of identity in the book. Shah seeks to understand her place in the world as an Indian American (specifically Gujarati) woman and how the American racial landscape has influenced her life in countless ways. 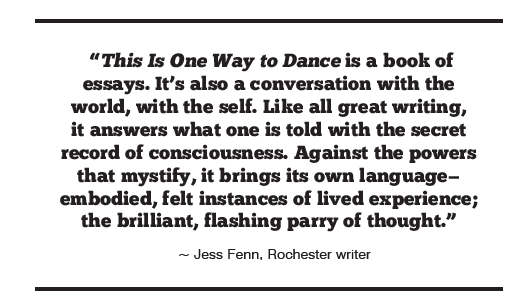 “In each other’s kitchens, they ate Hot Mix (Rice Krispies, potato sticks, peanuts, lemon juice, and murchu); practiced moonwalking; kept secret track of who got her period first, watched their mothers making chaa and finding the crushed red pepper to sprinkle on pizza, and their fathers debating something or playing carom.”

At the end of the essay she reflects on her childhood and that special, difficult, achy time of middle school and high school.

“We were more Indian once, I know this. We were something else once. I feel this as a nearly physical ache, this knowledge, because it means I am something else now,” she writes.

Holly Wren Spaulding, an author and interdisciplinary artist based in Maine, notes that Shah’s discussion of race and identity helped her come to a new understanding of what it means to be South Asian.

“I find her reflections on race and identity illuminating. They help me, a white woman, better understand what it’s like to move around in our world, in a South Asian American body, with the many complexities and challenges that fact provokes. On perhaps a deeper level, I admire how this voice arrives, from a distance, and brings me into an imaginative realm that is wholly her own, crisscrossed with identities, but distinct. No one else writes like this.”

Shah hasn’t danced for a while now but says she wants to find her way back to it. She is currently working on a collection of short fiction. Readers who want to learn more about Shah can visit her website at sejal-shah.com. Readers are also encouraged to read her highly acclaimed 2019 essay, “Even If You Can’t See It: Invisible Disability and Neurodiversity,” published last year in the Kenyon Review at kenyonreview.org.