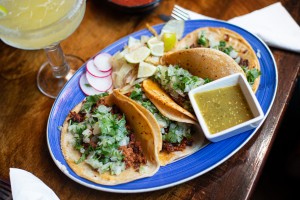 After a morning spent browsing books at the nearby Author’s Note, hungry shoppers can make their way to Mariachi De Oro for a savory Mexican lunch. The establishment—which features a vast array of appetizers, drinks, meals, and sides—first opened its doors to the Medina community in 2011 with a singular goal: “to share authentic food and to bring the traditions of Mexico to your plate.” Making true on that promise, Mariachi De Oro offers specialty dishes including Amarillo (steak with yellow mole sauce), Molcajete (grilled Mercado-style meats), and everything in between. Here’s what we tried:

In addition to its extremely flavorful dishes, Mariachi De Oro features bright and welcoming décor and a contingent of bubbly servers who are happy to offer their hot takes on the restaurant’s best meals. The Pollo Don Gollo (grilled chicken and shrimp with assorted toppings) won by unanimous vote. Mari Rosario—who has worked at Mariachi De Oro for four years—says, “[The Pollo Don Gollo] is really good. You’ll never get sick of it, but you will want a nap after.” Other staff recommendations include the torta, which is a Mexican submarine sandwich.