The sacred holiday of Samhain; photos by Michael Hanlon

Excitement grows as you start to see individually wrapped candies in hues of orange and brown and purple displayed prominently in the grocery store. Carved pumpkins, illuminated by tea candles, wear a permanent glowing grin at every doorstep. On the last day of the month you feverishly gather your perfect costume while people in masks and suits and painted faces line the streets of every bustling neighborhood. Buckets of sugary morsels wait for trick-or-treaters behind yawning doors draped in fake cobwebs.

Halloween: a widely celebrated holiday whose traditions are rooted in juvenile joy—trick-or-treating, pumpkin-carving, and dressing up in costume are the norm. But where did all of these modern practices come from?

The contemporary celebration of Halloween as we practice it today has its roots in the ancient Celtic spiritual tradition called Samhain (pronounced “SOW”-in). Samhain is a Pagan celebration that heralds the end of summer and the beginning of the last harvest of the year.Viewed as a liminal agricultural festival, Samhain signifies a time where the veil between the physical realm and spiritual realm is at its thinnest, allowing spirits and humans to interact more freely. As such, Samhain is a time to honor the dead and give thanks to ancestors and deceased loved ones. 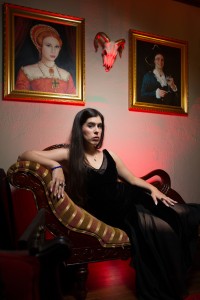 Dressing in costume for Samhain had a very important function in medieval times: warding off evil spirits. The function of a jack-o-lantern, with its wide, glowing grin, was meant to do the same, though the faces

were mainly carved into turnips rather than pumpkins in the Irish and Scottish traditions. Even apple-bobbing was used to tell one’s fortune as part of an ancient divination game.

Representing the transition from the lighter half of the year to the darker half, Samhain is, first and foremost, a celebration. Feasts brimming with food and alcohol are used as offerings to celebrate the deceased, gatherings and Pagan rituals take place, and massive bonfires are erected around which people dance and celebrate. It is a time for feasting, harvesting, honoring the dead, and celebrating loved ones.

Despite its ancient roots, Samhain continues to be one of the most significant holidays for many observers today. Rauncie Reynolds is one such practicing witch.

Based in Rochester, Reynolds, sixty-one, is the official Pagan chaplain at Rochester Institute of Technology, high priestess of her coven, and tarot card reader at the metaphysical supply store Mythic Treasures. Reynolds has been interested in magic since the age of ten and considers a witch to be a “wise woman or man who knows themself and who is in connection with the Earth and the changes around us.” 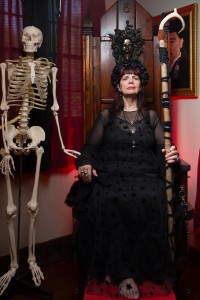 For Reynolds, Samhain is the most sacred celebration of the year. In past years, she has hosted group rituals and built altars where pictures of deceased loved ones are presented on a coffin, flanked with candles and offerings to the dead. “It really is about remembering,” says Reynolds. “In my tradition, we say, ‘Those who are remembered live.’”

Reynolds says that each witch has their own individual practices for Samhain, whether it be solitary or with a coven. A more traditional practice during Samhain is the Silent Supper, a dinner party at which each guest remains silent to honor the dead. At least one spot at the table is reserved for the place of spirits, where plates, candles, and food offerings are piled high in honor of their memory.

Every Samhain looks different for Reynolds. This year, she plans on celebrating in New Orleans, where she will attend the annual Endless Night Vampire Ball, one of a masquerade-themed series of soirees. The Vampire Ball is hosted for like-minded individuals who share a love for costuming surrounding the archetype of the romantic vampire. Fangs are encouraged.

Morgan DeLapa, thirty-three, is another practicing witch based in Rochester, who, like Reynolds, uses tarot as a way to connect to her spiritual self. As “therocwitch” on Instagram, DeLapa uses the platforms Twitch and Etsy to give tarot readings to clients. Through these platforms, she hopes to make tarot accessible to a wider audience so that she can help people access their highest potential.

A large part of DeLapa’s daily practice is to connect with her spirit guides and ancestors through tarot and mediumship. As such, Samhain is a sacred part of her practice each year. Part of her own unique tradition involves gathering offerings for her guides and deceased loved ones, which may include fruits and vegetables that she gathers in the wild. Along with a glass of wine, DeLapa presents these on an altar to honor and remember her ancestors who are ever-present in her practice. “They still walk with me now; they guide me throughout life,” says DeLapa.

In the future, DeLapa would like to see a place where the word “witch” does not refer to someone who is unhinged or has a propensity toward evil. For her, a witch is someone that carries out “the act of spiritual ritual for some sort of intention or outcome, for the better of the world.”

DeLapa points out that you can exist in the mundane world while also being a practitioner of magic. “Science and logic have a place alongside spirituality,” says DeLapa. “I would love to have a future where you can say you’re a witch and people don’t assume you have completely abandoned logic and reason.”

In the same vein, Reynolds has also faced discrimination as a witch. Her practice largely centers around service to the community, but she also points out that there are fringe people in every group and that those people don’t represent the whole.

“We’re just ordinary people. I live a different life, but this is the life that I love,” says Reynolds.

Reynolds and DeLapa are amongst a large community of pagans and witches located in the Rochester area. Even though they are from different generations of witchcraft, they both have the same belief: everything is sacred. Whether part of a coven or engaging in solitary practice, witchcraft transcends age, gender, and generations. To book a tarot reading with Rauncie Reynolds, call Mythic Treasures at 505-2702 or fill out the form on her website, rauncie. org.TikTok: Granny_Goth. Instagram: I_am_Grannygoth.YouTube: Granny Goth Rauncie.