Boxcar at 127 Railroad Street in the city is the brainchild of partners John Ebel, Marc LeBeau, and Mike Beinetti. Riding the coattails of the City of Rochester Public Market’s recent expansion, businesses spilled over onto Railroad Street. Situated near Rohrbach’s Railroad Street Beer Hall and Black Button Distilling, Boxcar offers gourmet donuts that will challenge your thinking about the once humble donut. These donuts are fancy and a little offbeat.

Owners and founders of Glen Edith Coffee Roasters, a coffee shop and roastery on Somerton Street in the Park Avenue area, Ebel and LeBeau had met working together at Verizon. Both were heavily into motorcycles. The two would meet up to talk about businesses they dreamed of starting someday.

In 2013, they opened Smokestack Cowork at High Falls. “We decided to brew coffee for the freelancers who rented space from us. Needless to say, our tenants enjoyed the coffee. The following year, we opened up our coffee shop and eventually started offering custom roasts to businesses around town,” Ebel says.

Equipped with a coffee roaster they bought from a casino in Nevada, they opened Glen Edith Coffee Roasters in 2014.

“We were buying pastries from suppliers for the coffee shop. We’d developed contacts in the pastry business, and one day we asked ourselves, ‘Why don’t we make our pastries in house?’”

About that time, Ebel and LeBeau heard about the city’s capital investment in the Rochester Public Market.

“We used to hang out on Railroad Street, so we had an attachment to that section of the city. We decided it would be a great time to invest in the neighborhood,” Ebel says. 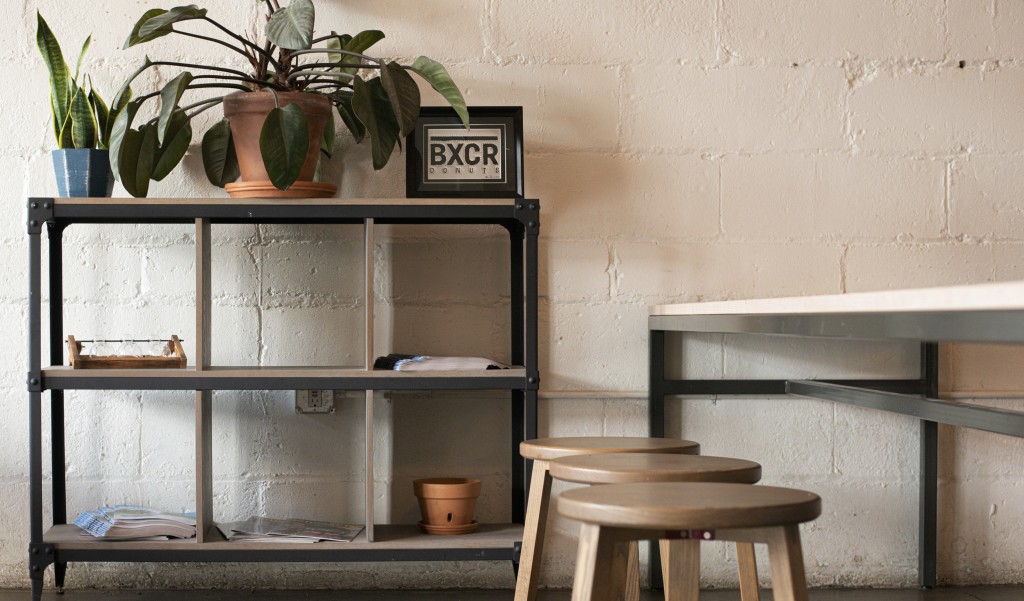 The pair signed a lease on a space that had been a former mushroom storage warehouse.

“We were one of the first people interested in renting the space. It was damp, had low ceilings, and needed tons of work.”

It took two years to build out the space. In May 2017, Boxcar opened to a line of people out the door that ran all the way down the street.

“It caught on pretty quickly. We had extra room under the fryer hood, so we also offered fried chicken as a specialty item on the menu,” says Ebel.

Boxcar manager Jane Levernz now doubles as head pastry chef. Although she says kids who love donuts are, by far, her favorite customers, she also likes to serve their parents.

“We have regulars who come in each week to meet up. It’s a friendly place to sit and relax,” Levernz says. Sometimes the younger patrons leave a toy or two behind, though. 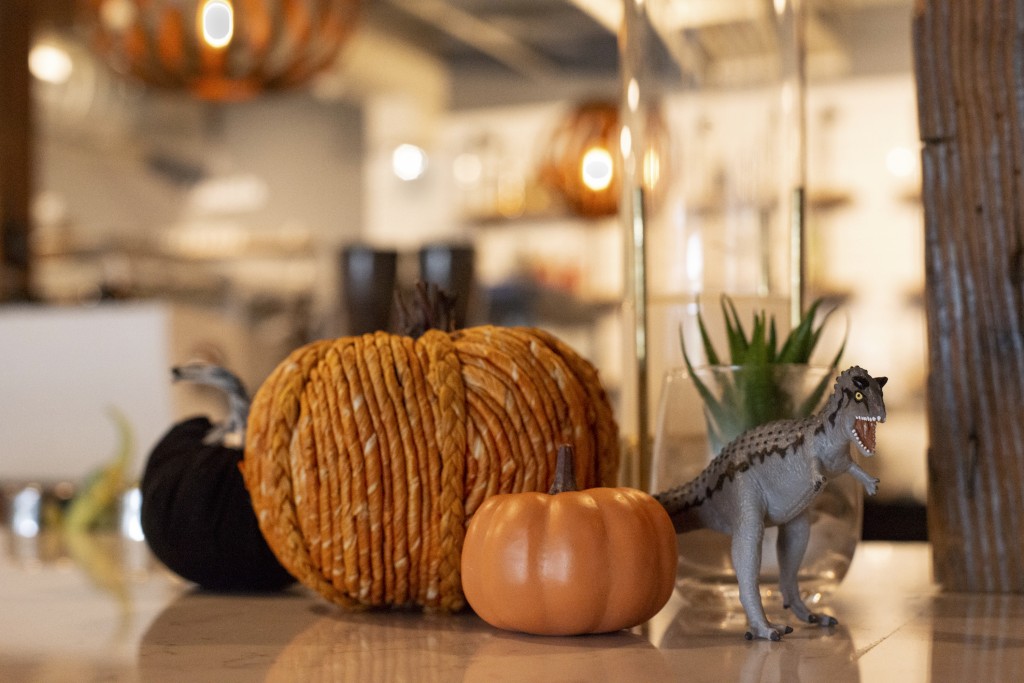 “One day, a little boy forgot his toy dinosaur on the counter. We kept it for him just in case he returned. Our customers would ask about the dinosaur by the register when they came in. The little boy eventually came back and picked up his toy dinosaur. There was so much interest though, we began to hide dinosaurs around the shop. We have eighteen now. When kids come in, if they can find all eighteen, they win free donut holes.”

Donuts at Boxcar come in three classes: Coach, Executive, and First Class, priced accordingly, as a takeoff on the shop’s railroad theme. Donuts come in every shape, size, and flavor. On the menu the day I visited: a square Maple Bacon donut; Black Magic, a deep dark chocolate glazed fry cake; an apple fritter; and more. Some donuts come iced with neon green frosting or topped with hot pink sprinkles. If you can imagine it, you may just find it at Boxcar. 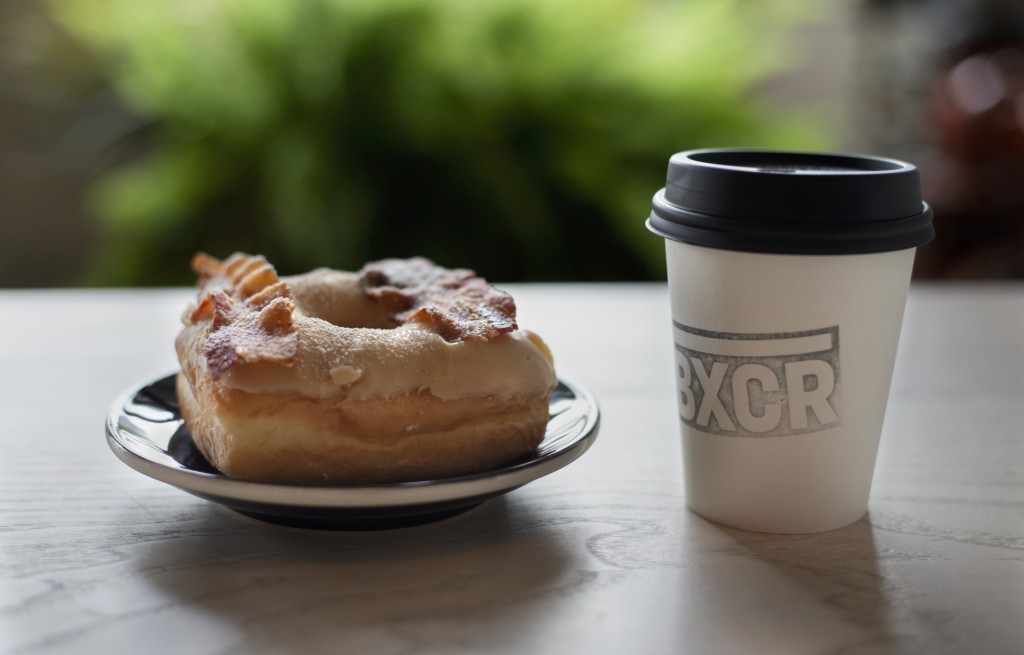 Coffee beverages from Glen Edith and noncoffee selections like Chai Guy’s chai, a London Fog, and the Matcha Tea Latte can be had. If you love tea, King Crimson, Ginger Peach, Emerald Spring, and others will delight your senses. Rohrbach is also on tap along with an assortment of IPAs.

Ebel, who loves to start new businesses, says the demand for high-end donuts has taken hold across the country. While he’s not sure he’ll ever leave his corporate job—that’s what funds new ventures—he delights in the next big thing.

According to Ebel, there’s nothing he’d rather do.

“We were born here; we love the city, and what could be better than helping this city thrive? Railroad Street is starting to feel a little bit like Little Italy in New York City. That’s not bad for Rochester,” he says.