The year the virus came to town

In the autumn of 1918, Rochester was a thriving city of 250,000. The world was in the throes of a great war happening in Europe, but there was another war to be fought. This one, close to home … and invisible.

The Spanish flu, as it was called, arrived in Rochester in late September. It started small with only two cases.

On September 27, New York Health Commissioner Herman Biggs warned residents that although this strain of flu was seldom fatal, the pneumonia that developed from it was dangerous. By September 28, there were four cases in Rochester. One of those suffering was a returning soldier from Fort Dix.  Suddenly, fifty nursing students and hospital staff were themselves occupying area hospital beds. Hospitals that were already short staffed due to the war effort soon began dealing only with emergencies and patients suffering from the flu.

The highly contagious nature of the disease meant that strict quarantine was not practical. Those suffering from the disease were urged to stay at home until fully recovered. The healthy were advised to avoid crowds and venues that weren’t well ventilated. On October 9, Andrew Hamilton, Rochester’s commissioner of public safety, ordered all schools to close at noon (after students were given instruction on how to protect and care for themselves during the pandemic). All public gathering places were to close by 11:30 that evening. Following measures that were already in place in New York City, retail businesses were ordered to stagger hours of operation, and larger industries were required to stagger shifts to avoid public transportation becoming overcrowded. 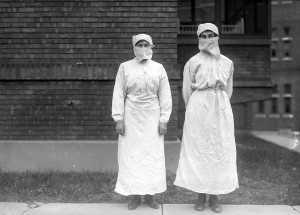 The pandemic grew in intensity. The hardest hit areas were Joseph Avenue, North Street, and adjacent areas where immigrant populations tended to live in overcrowded conditions. By mid-October, there were 1,000 cases. Hospitals were overflowing, and staff were working around the clock. Rochester General Hospital, for example, set up a separate ward to deal specifically with flu patients and an even more specific ward to take care of pregnant women suffering from the disease. Several emergency hospitals were opened. Infants Summer Hospital, a tent-based hospital on the shores of Lake Ontario used to care for babies suffering from respiratory and gastrointestinal issues due to poor sanitation and overcrowded tenements, was used for flu-stricken soldiers returning from the war. The local YMCA on South Avenue was used for women and children, and the Baden Street Emergency Hospital was mobilized to tend to local men. Other makeshift hospitals included the Housekeeping Center (an organization founded by a group of middle class men and women concerned about the quality of life for Rochester’s burgeoning immigrant population) at 53 Lewis Street, which housed a gym and cafeteria; Convention Hall (the present home of Geva Theatre Center); and Gannett House (located where Midtown Plaza stood), the parish house of the first Unitarian Church. Brewster House on Fitzhugh Street was called the Emergency Home for Children and was used to house healthy children whose parents were too ill to care for them. 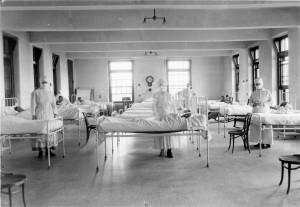 By the end of October there were 10,000 reported cases, and 450 people in Rochester were dead. Most of the newer cases were milder, and the number of new cases had decreased. City residents were hopeful that restrictions would be lifted.  Those working in area theaters were the most affected by closures. (Going to the theater was the most popular form of entertainment in 1918.) Four hundred people in the theater industry locally were out of work and receiving no paycheck as the pandemic was considered an “Act of God.”

A small, second spike of cases in mid-December occurred but didn’t require a second round of closures or restrictions.

The Spanish Flu affected forty percent of the world’s population, resulting in twenty to fifty million deaths, the majority of which were victims between the ages of twenty and forty. It is said that more US soldiers died from this outbreak of flu than were killed in battle during the war. Ultimately, 30,000 fell ill in Rochester, and more than 1,000 died. It is possible that those numbers could have been higher as not all cases were recorded. The death toll in Rochester was lower than in the neighboring cities of Albany, Syracuse, and Buffalo. The pandemic had reduced the city’s coffers by $20,000 ($300,000 in today’s money).

The work and quick thinking of city officials and an extraordinary network of volunteers led, in large part by the Red Cross, did not go unnoticed. Rochester was hailed nationally as one of the best cities handling the pandemic.

Dawn Kellogg lives in Rochester and is lucky to work in an industry that she loves!