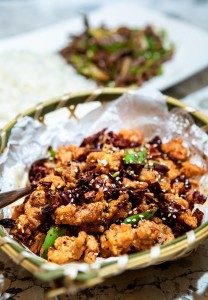 Have you ever looked up how many languages there are in China? The count is well over 300 (compared to the 200-ish spoken on the entire continent of Europe). Given the diversity in languages spoken, it should be no surprise that the term “Chinese food” does not begin to scratch the surface of the variety of cuisines present in China. It may also come as a shocker that the most commonly ordered “Chinese” dish here—General Tso’s chicken—was invented right here in the United States, but we will save that story for another day.

Sichuan cuisine was one of the first cuisines from China to strike out on its own in US food culture with a distinct identity. Known for its namesake peppercorn that has a unique numbing quality, it is also a cuisine in which spicy actually means spicy. Hot oil, chili peppers, ginger, and peppercorns are used liberally. Some Sichuan dishes have been modified heavily to become American Chinese favorites— such as pork in garlic sauce and kung pao chicken.

At Szechuan Opera, you can get the best of both worlds. It offers dishes most of us have had countless times—orange chicken, beef and broccoli, and yes, even General Tso’s chicken.

The appetizers run the gamut from the ubiquitous crab rangoon to the much less known beef tendon in chili sauce. You can choose to be as safe or as adventurous as you feel. Regardless, start with the Crispy Cucumber with Garlic (cold chunks of cucumber in a light soy-garlic sauce). It is refreshing and crunchy. I suggest keeping it around for the rest of the meal should you require a reprieve from a spicy dish. The Wonton in Chili Oil is a good start for fellow spice heads.

If you embrace spicy food (as one should!), welcome to heaven. Start with the dry hotpot. The “dry” part is a bit of a misnomer as the dish is served in a hot-oil heavy sauce. It comes as an ornate square bowl atop a flame to keep the dish warm and bubbling. If you are a shellfish fan get it with shrimp. The spicy chili oil sauce combined with the slight brine of the plump shrimp is delectable. 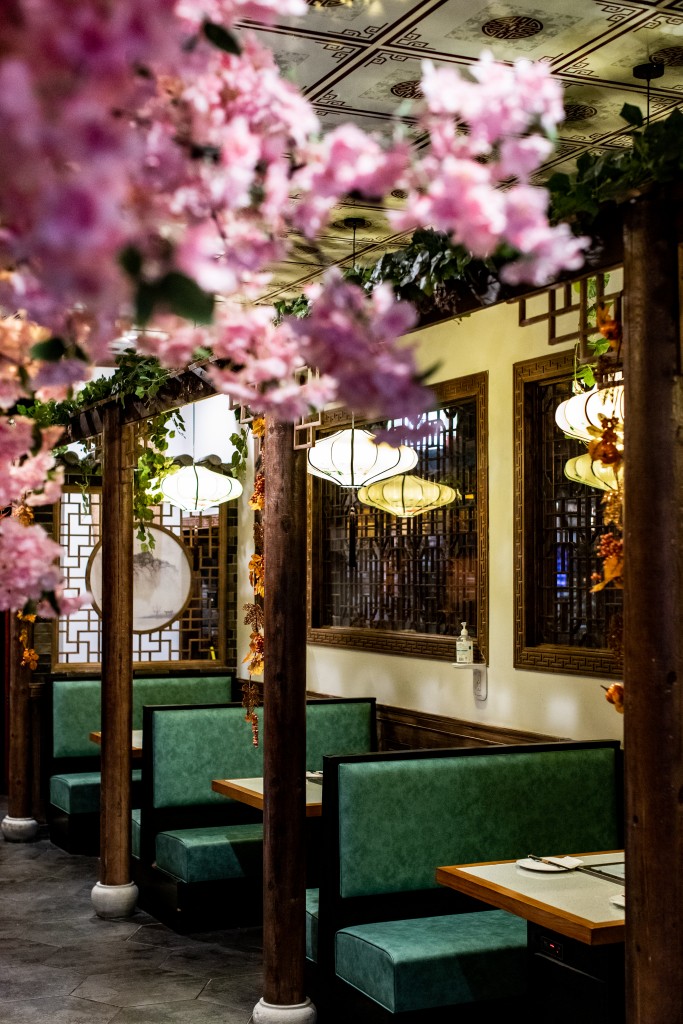 Other Sichuan dishes that will set your spicy spirit on fire include Shredded Beef with Long Hot Pepper (it has good wok hei, which leads to a spicy and smoky umami bomb!) and Diced Chicken with Pepper and Dried Chili in the Chongqing style (crispy cubes of chicken stir fried with crushed szechuan peppercorn, long hot green peppers, and dried chilis).

If your relationship with spicy food is classified as “It’s Complicated,” there are tons of options for you at Szechuan Opera. The Stir-Fried Ginger with Diced Chicken is a perfect choice for those who want something a bit spicy. The sauce is gingery and salty—perfect spooned on mountains of white rice. The Garlic Sauce Style is more balanced than the average takeout American Chinese joint and is great for those who prefer a slightly sweeter sauce.

I have to admit that I always order lo mein as a dish to share with my dining companions. As humble and basic lo mein may seem, Szechuan Opera’s is the best I have had in recent memory. The noodles are cooked to just the right chew, and the sauce walks the fine line between satisfyingly salty and over seasoned very well.

Recently, Szechuan Opera has added all-day dim sum to the menu. In my limited exposure, I have already found two must-try options. The Crispy Tofu Skin with Shrimp Roll consists of a thin, crispy, and slightly chewy soybean sheet enveloping succulent shrimp. The varying textures and briny note of the shrimp form a complicated but appetizing bite. The Pan-Fried Chive Shrimp Dumpling features a thick wrapper and, get this, chives and shrimp. Yes, it sounds simple but together, it is something greater in flavor. Pork bun lovers—Szechuan Opera has you covered with Cha Shu Bun (steamed bun filled with roast pork). They also have the famous pork Xiaolongbao (soup dumplings).

Want something sweet at the end of your meal? Szechuan Opera has a substantial dessert menu relative to other Chinese restaurants around town. Someday I hope to try the Durian Puff with friends who won’t disown me. For now, my top runner is the Sesame Bun (chewy bun studded with sesame seeds and filled with a sweet red bean paste—a nutty and sweet dessert that’s fun to eat). If you are leaning toward a cold dessert, try the mango, sago, and pomelo soup. The mango flavor is not cloyingly sweet, and the sago jelly will remind you of a much smaller and neutral version of a Haribo gummy.

Whether your dining crew is vegetarian, vegan, gluten-free, picky as heck, or spice-addicted, Szechuan Opera has you covered. Just be certain to notify the staff of any dietary restrictions prior to ordering.Yes, the infamous General Tso Chicken will remain your first “Chinese food” crush but Szechuan Opera? That’s your shot at real, meaningful, and spicy love.