Rochester Police Officer Kevin Yandow was cruising patiently in his patrol car along Genesee Street, heading north from Genesee Valley Park toward Bull’s Head, windshield wipers slapping rhythmically. As he approached the corner of Genesee and Magnolia Streets, he was flagged down by two seventeen-year-old boys, William Sanders and Anthony Morgan.The police- man pulled over.

“What’s up?” Officer Yandow asked. “The man who works in the Texaco Station is lying on the floor in the bay area,” Sanders said. “He’s kinda still.”

Yandow pulled his car into E.J. Bromley’s Texaco Station on the corner of Genesee and Magnolia Streets, entered the service bay area, and found a supine male victim between a gray 1976 Buick and the station’s west wall. The cop checked for vital signs and didn’t find any. There was a gunshot wound in the victim’s back and a spent .22 shell on the floor nearby. The location of the shell was indicative of an automatic weapon. A mechanic’s rag was next to one of his legs. About three feet from the victim’s head on the garage floor was his wallet. His ID said he was Robert Steeb Jr., twenty-three years old.

Yandow gave the garage another once- over and saw no signs of a struggle. He returned to his car, called an ambulance, and quickly made the necessary notifications. The shooter might still be nearby. Yandow entered the station’s front door and saw two cash registers to his immediate right. Whatever money might’ve been in them was gone. The register showed a total of $50.77.The owner later told police that there had been approximately $70 in “working money” in the drawer, plus another $18 in silver, for a grand total of $127.77. 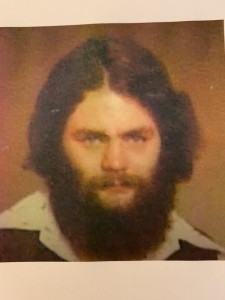 In minutes, a National Ambulance pulled up with David Welsh and Robert Schwartz aboard. The men checked the body for signs of life, found none, and so notified the medical examiner’s office. The ambulance attendants moved the body slightly to check it for signs of life, but otherwise nothing was touched or disturbed.

The crew from the medical examiner’s office officially pronounced the victim dead at 7:35 p.m. When the technicians were through, a chalk outline of the body’s position was made on the floor, and the body was taken by hearse to the morgue.

About this time the owner of the gas station, Edward J. Bromley, arrived and told police that he last saw Bobby Steeb at about 5:40 p.m. Steeb was left alone to work the evening shift and lock up the station.

“He was a husband and the father of a special-needs daughter,” Bromley said through his tears.

Police canvassed the neighborhood for anyone who might have seen something. Officer Gary E. Potuck had the best luck. He located an excellent eyewitness, a ten- year-old girl.

“I went over there to get a bottle of pop,” she said. “When I crossed the parking lot, the guy that worked there was pumping gas into a car. He finished and went back inside the service area where he started working on a car. I went into the office there where the Coke machine was. A man came running in and said that the gas station was closed, and I was going to have to leave. Then a woman grabbed me by the shoulders and pushed me back outside. She said the office was closed. I knew some- thing was wrong because the gas station wasn’t closed. I stood outside and watched. The man stood by the door and looked around. Behind him, I saw the woman taking money out of the cash register.”

The girl moved first to the northwestern corner of the gas station’s driveway and then crossed the street to be further out of the way. She could see the couple making gestures at one another. The man wanted the woman to hurry up, and she was saying,“hold your horses.”The witness saw both suspects burst outside already on the run.

The girl and her stepfather were taken to downtown Rochester, to the Public Safety Building, fifth floor, where she told police artist C. N. Potter about the suspects, a man and a woman, both Black. The witness’s powers of observation were tremendous.

The man was five-ten, 160 pounds, wear- ing blue jeans, light tan work boots that looked relatively new, a black applejack (an over-sized newsboy style) hat turned backwards, and a dark brown waist-length leather jacket with an elastic band at the bottom and a zipper down the middle.

The woman was five-five, 120 pounds, dark with bumpy skin on her cheeks and forehead. No, it wasn’t pimples, the witness said. It wasn’t acne scars. It was bumps. She was wearing a tan three-quarters-length leather coat and blue jeans. She had straight hair going down the sides of her face that resembled a man’s sideburns. She wore a black applejack hat turned backwards, worn high on her forehead and pulled tight at the hairline, a light brown knee-length cloth coat with black buttons, and a blue shirt with the collar protruding. She hadn’t seen the man well enough to describe his face, but she’d gotten a better look at the woman, and she worked with the artist on her. The resulting composite drawing was quickly disseminated and shown to those who lived near the crime scene.

Another set of witnesses, living across the street from the station, corroborated the little girl’s description of the woman, say- ing she had “dark bumps on her face.”

The first big break in the case came on Tuesday afternoon, May 27, 1980, when 17-year-old Michael McClarrie and twenty-five-year-old Robert Bodewes found a Belgian-made .22 Browning automatic in the shallow waters of the Genesee behind the Raundel Library. The men told police they’d entered the riverbed just north of the State Street Bridge on the library side, then jumped from rock to rock until they were almost in the middle of the river. There they saw something protruding from the water.

“I picked it up carefully because I could see it was a gun and I wanted to preserve any fingerprints that might be on it,” McClarrie said.

A few minutes later they found a plastic bag and put the gun in it.They returned to the east bank of the river by jumping from rock to rock and went up onto the Court Street Bridge where they flagged down a patrol car. Because of the location of the find, police figured the gun had been tossed off the bridge.

The gun was hardly a street gun. More like something a pro killer would pack: a semiautomatic .22 with a gold trigger and a modified barrel. Over the next two days, a test firing was made on the weapon by Officer Robert Stanton, and it was positively identified as the gun that killed Bobby Steeb.

Jump ahead to 2008. Bobby Steeb’s good friend Dan Gleason, himself a gas station attendant at the time of the murder, was now an investigator with the Rochester police and had been given permission to work the Steeb murder as a cold case.

Gleason developed a witness, Mr. X, who said he knew what happened to Steeb. It had been a mob hit. One of Steeb’s coworkers had been in debt to the wrong guys, and they shot Steeb to send a message. (Shoot the actual debtor and you never get your money.)

But what of the man and the bumpy-faced woman running hand in hand? Gleason believes he knows their identities and theorized that they were merely opportunistic, coming upon a gas station with the sole attendant down, they took the money and ran. Hand in hand. The actual murder, X insisted, had been committed moments earlier by the son of a well-known Monroe County hoodlum, accompanied by a Black man and an Italian woman.

Today, the RPD is still actively searching for the killers of Bobby Steeb. If you have information that might help, please contact the police, or if you prefer, you may email your information and contact information to true-crime writer Michael Benson at tekmatt@aol.com, using the subject line “Steeb.”