The hidden pleasures of downtown

Rochester’s downtown is not only defined by repurposed office towers with colored LED lighting and public parcels whose best use we argue about endlessly. It is more than the reclaimed Inner Loop land and its rows of new apartments rising from the mud. In between these big places, there are the hidden places, hidden corners of the city only visible to a pedestrian or cyclist making his or her slow way around and through the center.

Here are some of these hidden pleasures, places tucked away from the sight of drivers. Some will be familiar, others less so. Some are private and seen from outside while others invite meditation, providing refuge from the bustle. These can be explored in one long walk, but my preference has been to take an occasional detour from the usual now and then and look into a place or neighborhood I’d likely pass by otherwise. 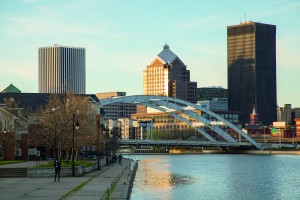 Let’s start with a place many are familiar with, though you may only have seen them during a concert or crowded festival. For years the extensive fountains and waterfalls were silent, their plumbing had failed, and the brutalist concrete forms became a target for taggers. But several years ago they were rewatered with all new plumbing and the surfaces cleaned and painted. Now they are an oasis in the center of downtown.

The best time to experience the calm we feel from roaring water is when the crowds are gone, dusk or early in the morning on a hot day. If you’re lucky, you’ll have them to yourself and can let your mind wander into the sound of endless rushing water.

The gardens of St. Mary’s Roman Catholic Church and Rectory

Only a block away from MLK Park, across from Washington Square Park (a downtown gem in its own right), stands the church and rectory of St. Mary’s, with its Tiffany rose window facing St. Mary’s Place. But in summer, it is the gardens that truly glow. Wander all around these spaces, down the little alleys between the buildings, and you’ll see endless beds of spectacular flowers.

Be sure to go through the gate on the north side into the small park square with its fountain. Here you can see what I consider the finest view of the downtown towers, framed by magnolias layering nature against the soaring stone and glass.

The promenade on the river

Head down Woodbury Boulevard from the churchyard toward the river, stopping by Fuego Coffee Roasters for a coffee. Then cross Broad Street at the Nathaniel Apartments and follow the path to the left and around the building to the new Promenade on the River. Finished last year, this pathway offers a beautiful view of the dam and the rushing waters of the Genesee, with modern seating areas designed for contemplation or catching rays. As you follow it around the new apartment buildings towards the Dinosaur Bar-B-Que, you can look down and see the water cascading under the old Lehigh Valley Railroad station and catch a view of the arches under the Rundel Memorial Library building.

Looking for a longer walk? Cross the Court Street Bridge and pick up the paved river walkway that heads south along the Genesee. If you walk to the Ford Street Bridge and cross over to walk back, you’ll complete a two-mile loop at the Dinosaur, passing our new City Skatepark near the end. This walk is particularly nice around sunset as you pass along Corn Hill Landing, where you can grab a bite and a beverage along the water. From here, in summer, you would be forgiven for feeling you were in a waterfront resort with boats on moorings and joggers and flaneurs strolling along the wide walkway.

This walk will only improve as the city moves forward with its river edge restoration project on the west bank. Old embankments that block the view of the water were once necessary to protect Corn Hill from flooding, but the Mt. Morris dam eliminated that risk years ago. With their removal we will move much closer to a long-term goal of reuniting the city with our riverfront.

Another walk that will soon change dramatically

Roc the Riverway is a series of major building and reconstruction projects that will continue that goal of reminding Rochesterians that we have a major water asset downtown. Make your way to the west bank of the river at Main Street next to the bridge with its Albert Paley railings. To your left is a small pocket park that has been a favorite place to while away a lunch hour for west-side downtown workers.

We are headed north. Go down the stair along the river to the right of Main Street and follow the walkway past the pedestrian bridge. The red sculpture on the other side is an early Wendell Castle piece. As you walk north you’ll find yourself following a red sandstone park path and benches carved into the river bank in the 1970s for a linear park. Unfortunately it was rarely used, as downtown hit its fallow period in the eighties and nineties. This will be removed and a new public space developed for gatherings and downtown concerts.

Under the Loop to High Falls

If you make your way across Andrews Street on the west bank, you’ll find a pedestrian tunnel that goes under the busy Inner Loop North. There are plans afoot to remove this last vestige of underused freeway and reconnect the northside neighborhoods to downtown. For now it remains a barrier, but the intrepid walker or cyclist can go through the tunnel and come out into what has become a downtown pocket neighborhood, High Falls.

Cobblestone streets, a raceway once used to power flour mills, and a pedestrian bridge with spectacular views of the Upper Falls are familiar to most of us, but they still are always worth a walk. Here the Greentopia initiative hopes to turn the entire area into downtown hanging gardens and a walking loop with a walkway directly over the falls. Until that sees fruition, the views are still amazing and the best places to see them are the rooftop decks of the Genesee Brew House and museum. Grab a cold one and a bite and catch some sun above the falls. 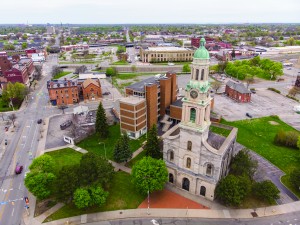 Continuing south on St. Paul Street from the Brew House, you once again cross the Inner Loop and reenter the center city. Passing through the St. Paul Quarter and by Tapas 177, you may be tempted by this venerable neighborhood bar and fine dining establishment known for its tapas plates and salsa lessons. It offers a lovely urban patio in back on its lower level.

Continuing down St. Paul to Pleasant Street, a side street near the Transit Center, take a left and walk past North Clinton. Directly ahead are the ruins of St. Joseph’s Church, now a city park. The church interior is open to the sky, offering a different kind of contemplative experience.

At the corner of Gibbs and Main, with its fading piano key crosswalks and the Eastman School of Music, behind the Carlson YMCA, is the historic Grove Place neighborhood, a quiet enclave of old row houses and modern townhomes surrounded by parklike gardens. It is the most charming and quiet residential block in the downtown area.

Turn right onto Selden from Gibbs to see this tiny green-and-brick refuge. On the left there are private gardens with sculptures by local artists. This is private property, so enjoy the view over the gate but please respect the owners’ privacy.

Heading back down Gibbs you can stop at one of the restaurants along the block near East Avenue and grab a coffee at Javas, a downtown fixture. Assuming you had the legs to do this tour as one big loop is probably unrealistic, but let’s get you back to the start at MLK Park with a little surprise at the end.

Zag down East to Scio and turn right past the church to the Broad Street traffic loop. To your right the large Five Star Bank building looms, but our surprise is just in front of you on the building’s grounds. If you look up the grassy rise, you’ll see a low curving concrete wall forming a circle perhaps fifty feet wide.

Walk up the knoll and take a look over the wall. Beneath you is a truly hidden gem, a sunken garden only accessible from the lower levels of the building, but open to the sky. It features a symmetrical set of pathways and flower beds and a small grove of mature trees. This hidden secret garden represents just a fragment of the urban fabric you can find exploring Rochester’s downtown. Finds like these make setting aside a few quiet afternoons to explore our city a journey of small discoveries and hidden pleasures. Find a few of your own.

Martin Edic is a marketing writer based in Rochester, who also writes on Buddhism, the freelance lifestyle, and other topics. More at martinkedic.com.