As the Red Wings International League baseball season entered into what would have been the second month of the season, first year skipper Toby Gardenhire was still at home in Ft. Myers, Florida, waiting for his AAA managing opportunity to begin. Baseball, also known as America’s pastime, is among the many COVID-19 casualties, and while there may be contingency plans for major league baseball, there aren’t many for AAA baseball, as the first quarter of the season went by without an inning of play.
Daily Zoom meetings with coaches isn’t what Gardenhire had planned at this point in the season (or non-season). He’s taking Spanish lessons,  too,  to fill the downtime with something useful and because many players come from Spanish-speaking countries.
“We’ll be back whenever the CDC, local health officials, and elected officials assure us it’s safe to do so,” said Red Wings president Naomi Silver in a message to disappointed Rochester baseball fans.

It’s also the first thing Gardenhire said: “There’s not much the Minnesota Twins, Rochester’s parent club, and major league baseball can do.”
His time will come—he just doesn’t know when. 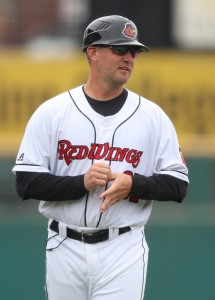 The thirty-seven-year-old Gardenhire is more than twenty years younger than his predecessors Joel Skinner and Mike Quade. But he’s only a year younger than current Twins manager Rocco Baldelli, the youngest manager in the major leagues. Gardenhire was a college baseball coach after his playing career and coached two years in Class A before getting the job in Rochester. That means he worked with players in their teens and early twenties. He’ll be working with older players now who are just one step away from the big leagues. Different players, ages, and situations call for different approaches, he says. “I like to think I’m easy to get along with. I want guys to work hard, have fun, and enjoy every bit we can.”
It helps that he has a good relationship with the players in the Twins organization already. Another thing that helps is he played just about every position on the field during the course of his seven-year minor league career. He was drafted by the Twins, played in the Twins organization, and coached in it, too. His destiny is still with the Twins. “I played as long as I could,” says the utility player known for his defensive ability and the man who wanted to be a manager as much as he wanted to be a player.
Gardenhire’s playing career included two years and 153 games as a Red Wing in 2010 and 2011. He knows the way to the Lilac Festival, Dinosaur Bar-B-Que, and Frontier Field. He’s even coached a little here already.

“It’s always been a pitcher-friendly park,” he says. (A deep gap in left center used to keep home runs down, but a new ball used in 2019 resulted in more home runs.) But he wouldn’t try to make a team based on the field. “If guys can hit, they can hit. If they can pitch, they can pitch just about anywhere. It all seems to even out,” he says. It sounds simple and yet, he says: “One thing about baseball is nobody’s got it all figured out.”
Gardenhire is the son of former major league player and current Detroit Tigers manager Ron Gardenhire, who also played for and coached the Minnesota Twins. Following in the footsteps of famous players and coaches isn’t always easy for their offspring, but it’s a challenge the younger Gardenhire always wanted. “I’m one of the kids [following in a famous father’s footsteps] it did happen to,” he says. Toby was born when his dad was a player for the New York Mets. After that, the family followed wherever Ron’s baseball career took him. One thing stayed the same in every city: the clubhouses full of players he grew up mingling with. “I was a very lucky kid to be in that atmosphere,” he says. It was fun being around the game then, and it still is for him today.
In some ways the game stays the same; in other ways it doesn’t, Gardenhire says. The strength of the players has changed since he played. Batters hit more home runs now, and more pitchers throw over 100 mph. “The strength and conditioning of players is so much better. The players understand their bodies more. We just didn’t have their technology when I was playing,” he says.
He and the Twins coaching staff send suggested workouts to players and keep in touch with them while they’re stuck at home like everyone else. As for his Red Wings players, Gardenhire says guys at the AAA level “have a pretty good idea of who they are and what they need to do.”

One thing that often irks Wings fans is watching games in April when it’s cold— sometimes bitter cold—and driving by Frontier Field in September when the weather is warm and beautiful but the season’s over. That’s because major league rosters expand in September and the expanded roster is most likely to include AAA players. “It’s a fine line between what’s too late and what’s too early, and it always has been,” Gardenhire says. “It’s really cool for these guys to be able to go up there. The big leagues will always get priority.” In other words, it’s cool to be a Rochester Red Wing but it’s even cooler to be a Minnesota Twin, and it pays more, too.
In recent years, the once-traditional progression for players from AA to AAA to the majors has seen many players skip AAA and jump right to the majors from AA.
That’s left some fans feeling like they’ve been cheated out of seeing a hotshot prospect play. “By the time some kids get to AA today, they’re so fast and so strong, they don’t need to be in AAA,” Gardenhire says. Every organization is different, and sometimes it depends how good or bad the major league team is.
“Right now the Twins are really good. A playoff team. So players have to wait their turn. What we’re going to try to do with the Twins is send guys through AAA [Rochester] to get the experience. I think we’re going to see a lot of prospects here.”

That should give longstanding Wings fans something to look forward to. That and a playoff appearance, something that has eluded them since 2013, despite having a string of winning seasons in recent years. “Hopefully, I can get us into the playoffs and make a run [at the International League championship] because that’s what the people in Rochester want to see.” That is what fans want to see—along with seventy home games, which isn’t going to happen this year.