I am casually flipping through one of my sis-ter’s fashion magazines when I spot it on page ten: THE DRESS. A knee length, black, halter top, cocktail dress with a fuchsia tulle underskirt peeking out from the bottom hem. Two wedding invites currently sit on my desk taunting me. I have nothing to wear to either one of them. Bridal magazines have us believe that the bride’s dress is the only one that matters but not today!

This dress had an understated, elegant vibe with a bright swath of rock and roll flavor. At this moment in pop culture, Kelly Osbourne is the sassy style icon du jour, and hers is the look I’m after. I quickly ordered the dress and waited for it to come in the mail. My style usually leans conservative, but at $48, the dress was a walk on the wild side I could afford.

The inaugural run of The Dress was a doozy: a family wedding ON New Year’s Eve. An open-bar reception coupled with the grandeur of the midnight countdown. Family weddings are an interesting character and environment study. Buoyed by the promise of true love and Big Gulps full of free booze, all protocol goes out the window.True personalities, long repressed by the bounds of familial responsibility, come catapulting onto the main stage. On this particular night, my sister struggled with a head cold, and our highly revered aunt counseled her on the benefits of brandy on a sore throat while taking her own advice by doing a few shots of it at the bar. On the dance floor, as the drink tally went up, inhibitions went down. My brother was dancing in his undershirt—much to my grandmother’s chagrin—using his tie like a lasso on the ladies. I dodged a close call by politely declining a dance with a fella I suspected I’m related to. 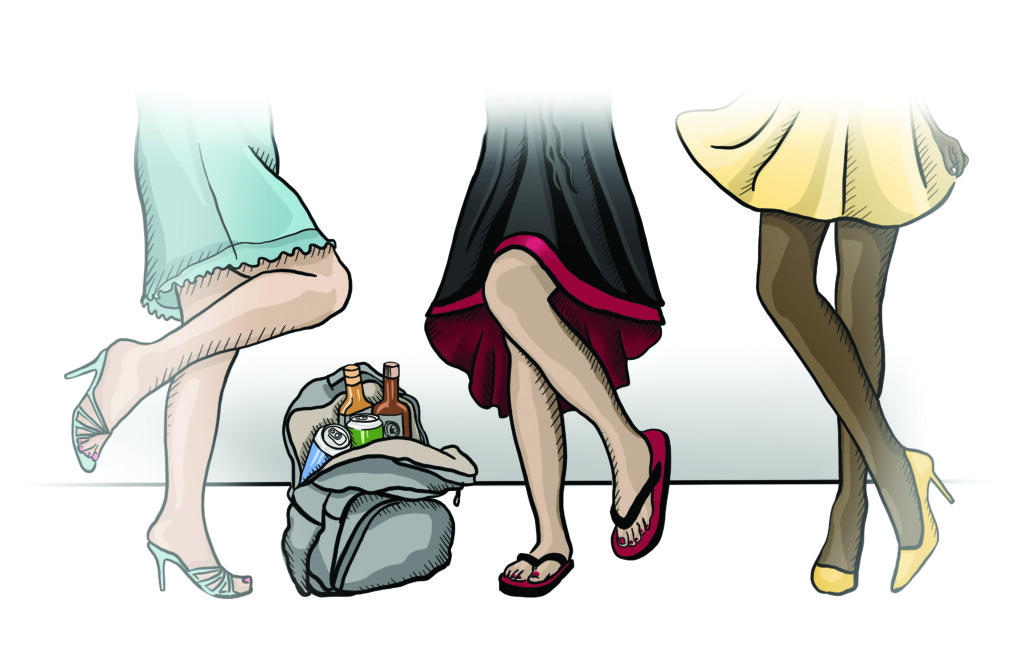 Afterward, my dress and I went to a night club with all my cousins—cuz there’s nothing more rock and roll than an afterparty. I woke up the next morning at my grandma’s house with my sister, who still had her sparkly silver party hat on. I was holding a bottle of Pedialyte and had dried beer stuck to the soles of my feet. Maybe I was dressed like Kelly, but we partied like Ozzy. Getting loose with the family is ok for the night, but once the dust settles, it gets awkward. Like passing the gravy boat to everyone at Thanksgiving dinner while you’re all still covered in body glitter after an insane night in Vegas.

The second outing of The Dress was less rock and roll and a little more high society. One of my high school friends was getting married in Ottawa, Canada. The ceremony was at an old cathedral, and the reception was in an old-fashioned castle, a true fairy tale setting with high towers, stained glass windows, and ornate drapery. I decided to accessorize a little class into my outfit with a red beaded barrette and a flower pinned near the lapel. I tried in vain to wear a pair of classy heels, but once the dance floor lit up, I switched to something more comfortable. I’ll never forget the chorus of laughter that came from my table when the elegant bride, with tiara on fleek, loudly shrieked, “is Taylor wearing FLIP FLOPS on MY dance floor!??”

Also neutralizing the high society vibes was the large backpack full of liquor my sister and I brought for the occasion. We’d never been to such a classy affair, so we worried the drinks might be expensive. So, sisters gotta do what sisters gotta do: we spot the liquor store on our way to the church and abruptly cut across four lanes of international traffic while our friends in the backseat hurled obscenities at us. Once we acquired the loot, we quietly tucked the bag under our table at the chateau in case things started to get pricey.

Our night took an adventurous turn when I returned to the table and found both my sister and our table mates missing— along with the backpack full of liquor. I grabbed a friend, and we Sherlock Holmesed our way around the halls of the castle.We found them all on the ninth floor, positively moved by the sight of the centuries-old stained-glass windows. We moved closer for a better look, only to find that they’re actually just plain, clear-paned windows and these drunk fools were overselling it.We gathered them back on the elevator to rejoin the party, but not before one of our friends started dry heaving into a plant.

The six-hour drive home after that night of high-class debauchery was a struggle. This wasn’t a pace I wanted to keep up, so I decided that my brief stint as a rock and roll wedding guest had to end.

Apparently, the marriages also had to end, as divorce befell both couples not long after the festivities. I think about the dress, the short-lived marriages, the undeniable fun, and I hear those oft-quoted rock and roll lyrics: “It’s better to burn out than to fade away.”