Tea and crumpets anyone?

Care for a cup of Yorkshire Gold tea and a homemade crumpet with a smear of fresh orange marmalade or raspberry jam? Evinn Neadow, co-owner of Crumpets at 441 Monroe Avenue in Rochester, would like to introduce you to this English specialty.

No, Neadow isn’t British. In fact, there’s not much in her heritage that would reveal her passion.

“I had a DNA test to discover my ancestry. My ancestors have very little British blood. And, when we visited the UK, we couldn’t find crumpets anywhere,” she jokes. “We had high tea at the Delaunay Hotel in Covent Garden, not a single crumpet.” (Neadow has since found someone in the UK who sells a variety of flavored crumpets: chocolate chip, spice, and more.) It didn’t take British relatives to inspire a love of crumpets. Neadow discovered on a fateful trip to Pike Place Market in Seattle with her sister several years ago that she couldn’t get enough of the spongy soft, yet crispy, rounds of yeasted dough.

“We went to the crumpet shop every morning while we were in Seattle. The texture, the flavor of the crumpets was so satisfying,” Neadow says.

Crumpets look like donuts and are a mix between an English muffin and a pancake. The round biscuits are cooked slowly on a griddle.

Neadow wrote off owning a crumpet shop of her own as just a dream. But her obsession remained. She’d unwind by experimenting with crumpet recipes at home after long days working as an art teacher. She studied photography and art education at RIT.

The test kitchen heated up when Neadow was on maternity leave with her second child. “I was testing several recipes a day, looking for that perfect combination of fluffiness and body,” says Neadow.

Just before the pandemic hit, Neadow decided to leave teaching altogether. A friend called and asked if she’d come look at a space for rent on Monroe Avenue. He’d found an ad on craigslist.

The space was perfect: a large picture window upfront, interior brick wall— with signage still imprinted on it—and an original tin ceiling. Neadow knew her husband, a carpenter, could transform the space.

“I had been talking with friends and family for years. On New Year’s Day, I invite almost everyone I know to an open house at our house. I serve crumpets until they run out. Honestly, everyone was so tired of hearing about me wanting to open a shop, I thought, “Why not?”

Neadow’s husband built the cabinets at Crumpets, then fashioned a counter from doors reclaimed from the business next door. The mirrors in the café were a gift from Neadow’s mother, and the chairs in the café had once been her grandmother’s. A welcoming, char ming inter ior emerged: black and white tile floor, vintage pendant lights suspended from a whitewashed tin ceiling, handmade tables with black Viennese chairs, lots of plants in the window, and a library index-card filing cabinet for storing teas.

After a year of rehabbing, Crumpets opened quietly on April 1, 2021. At first, crumpets were sold in bags of four ($6) and six ($8). Soon, toppings were added to the menu, both sweet and savory. Honey, Nutella, maple syrup, or caramel with sea salt are just 50 cents; a dollar for cheese: ricotta, cheddar, or fresh mozzarella.

The menu also offers combination toppings such as peanut butter and jam; cream cheese, dill and cucumber; and caprese—pesto, tomato, and mozzarella. There are also breakfast crumpets with fried egg, bacon, and cheddar.

Neadow runs the café with her husband, Bill Downs. Downs curates the tea selection at Crumpets. Anything from traditional British teas like Yorkshire Gold (I tried this one, very British) and English Breakfast to white peony, gunpowder green, and licorice spice complement the crumpet selections. French press coffee from Java’s and cold brew from Joe Bean are also available. 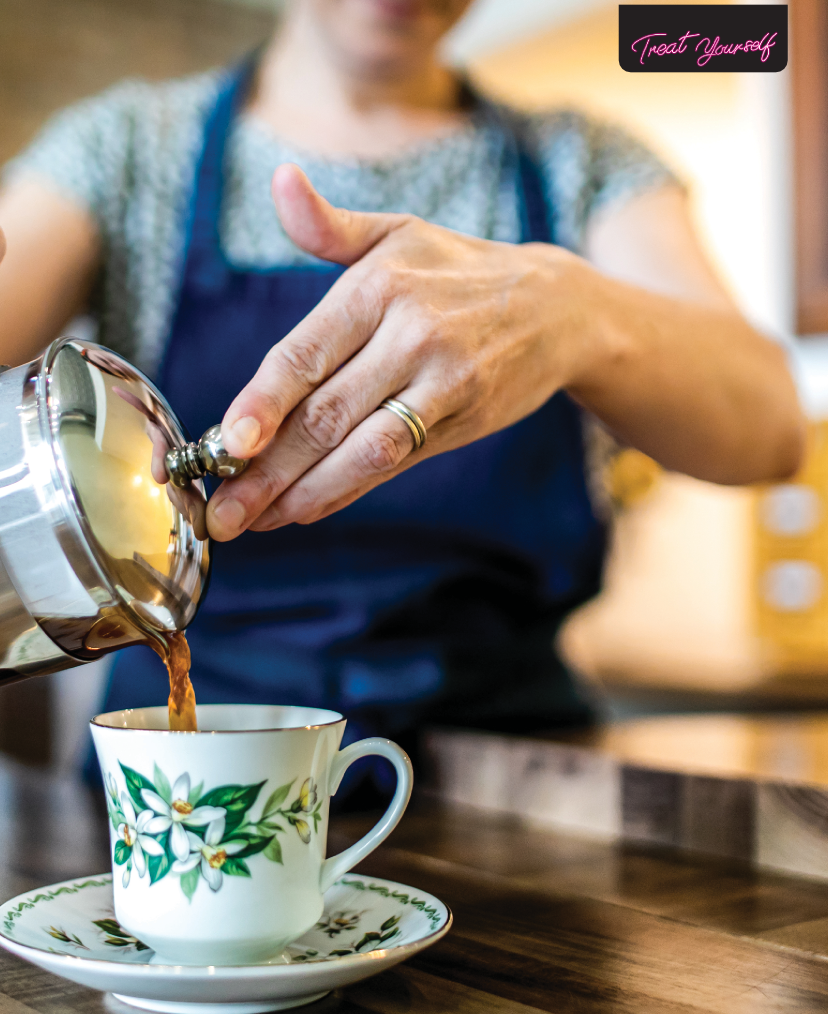 Neadow wanted to bring as much of her family into the café as possible. There are many tributes to her parents and grandparents. “My grandma Annie (Ann Jackson) introduced me to high tea. I feel honored to be able to serve tea here in her teacups and crumpets on her dessert plates,” Neadow says.

She recalls her grandfather fondly for his love of orange marmalade. Neadow serves orange marmalade she makes herself and raspberry jam (I tried this, too) to top her crumpets.

She says the response to the café in the beginning was overwhelming. “We would sell out by the end of the day. Some of our regular customers from the UK and Australia remember homemade crumpets made by family back home. Bagged crumpets can be frozen and toasted. Several of our customers buy a quantity when they visit,” she says.

The bright teal storefront at Crumpets is hard to miss. Her café shares the block with Voula’s Greek Sweets, Master Falafel, and New York Stylee. “I love the neighborhood. It’s a very eclectic place, very diverse. Honestly, I don’t think I’d want to be anywhere else,” she says.

Light yet substantial, the crumpets make a great base for almost anything or are tasty eaten with warm butter. All the crumpets at the café are vegan. Crumpets can be stored in the fridge in plastic for two days. Freeze them for longer storage, then, when you’re ready to eat them, take directly from freezer to toaster. Enjoy with any toppings you like!