Our collective history can often seem inaccessible, intangible, and perhaps, for many, even downright dull. For anyone who may feel that way, a pleasant surprise awaits at the Genesee Country Village and Museum’s 30,000-piece American costume collection. A true case study of history coming to life, the Susan Greene Costume Collection housed within the John L. Wehle gallery on the museum’s campus offers an intimate look at the daily garments Americans wore from approximately 1740 to 1910. From the wealthy to working class, the collection explores just how Americans were clothed for more than 150 years.

There is an uncommon feature to the Greene collection that many other costume collections overlook—many of the pieces are the most common items of clothing that were so often worn until they fell apart. Visitors can view these basics to get a better understanding to how our forefathers and foremothers functioned day-to-day. As Brandon Brooks, curator at the John L. Wehle Gallery explains, “It is a collection that has the high-end clothing that wealthier families would keep as a form of intergenerational wealth. However, something that the Susan Greene collection has that a lot of other collections lack is basic, everyday clothing. The pieces that become ephemera, the ones that usually don’t survive, we are lucky enough to have those pieces for men, women, and infants.” The 30,000 pieces include underwear and outerwear from the simplest and most personal garments to fabulously luxurious winterwear. There are socks, gloves, simple linen chemises, and mantles or cape-like cloaks, made from the finest materials meant to keep the wearer warm against harsh winds.

Included within this massive collection  is an impressive representation of shoes. Approximately 200 pairs of shoes are part of the larger ensemble and are from the eighteenth, nineteenth, and twentieth centuries with about ninety percent of the collection from the nineteenth century. Although the span of centuries are adequately represented, the sizes of shoes tell us about an interesting historical misstep. Much like today, not only was the standardization of shoe sizes the norm, but the middling range of sizes tended to sell out the fastest. This means that the smallest sizes are often what survived the centuries. Because of this there is a false idea that our predecessors had small feet. It is more likely that midsize shoes were worn repeatedly over time, fell apart, and were then unable to survive for our viewing pleasure.

The style of shoes for both men and women changed throughout the centuries just as clothes did. In some eras a small, dainty foot—for both sexes—was the intended look, so shoes had to communicate that illusion. By the nineteenth century flat shoes were the most fashionable and popular and had shifted away from the courtly French heels of the eighteenth century to an easier, more comfortable American style. Common shoemaking materials were leather and linen.The upper and upper-middle classes wore soft, supple leather or beetled linen. Beetled linen refers to a textile finishing process in which layers of linen are repeatedly beaten to tighten the weave of the fabric to create a smooth finish and reveal a luster. The working class wore heartier, stiffer leather. A working-class individual may go through eight pairs of shoes in a year, while a wealthier wearer had dozens of pairs of shoes, “Not because you are wearing them out,” explains Brooks, “but rather due to fashion.”

The evolution of the shoe was rapid in the nineteenth century with many precedents established that we still use in our modern footwear today. In the 1840s to 1850s the right shoe/left shoe delineation replaced shoes made with the same shaped wooden form, allowing the wearer’s foot to form the left/right shoe. Waterproofing was especially important for working-class shoes and was accomplished in many ways. Substances such as waxes, oils, or fats could be painted over the shoe. One could also wear overshoes, such as carriage boots, over cloth slippers. However, beginning in the 1830s and 1840s, America began harvesting rubber from the rainforests of South America, and, in the same decade, the process of vulcanization was discovered by Charles Goodyear. This revolutionized many aspects of American culture, including the fashion industry, and revealed a new, better way to weatherproof clothes and shoes. This process, of course, is one we still use today. 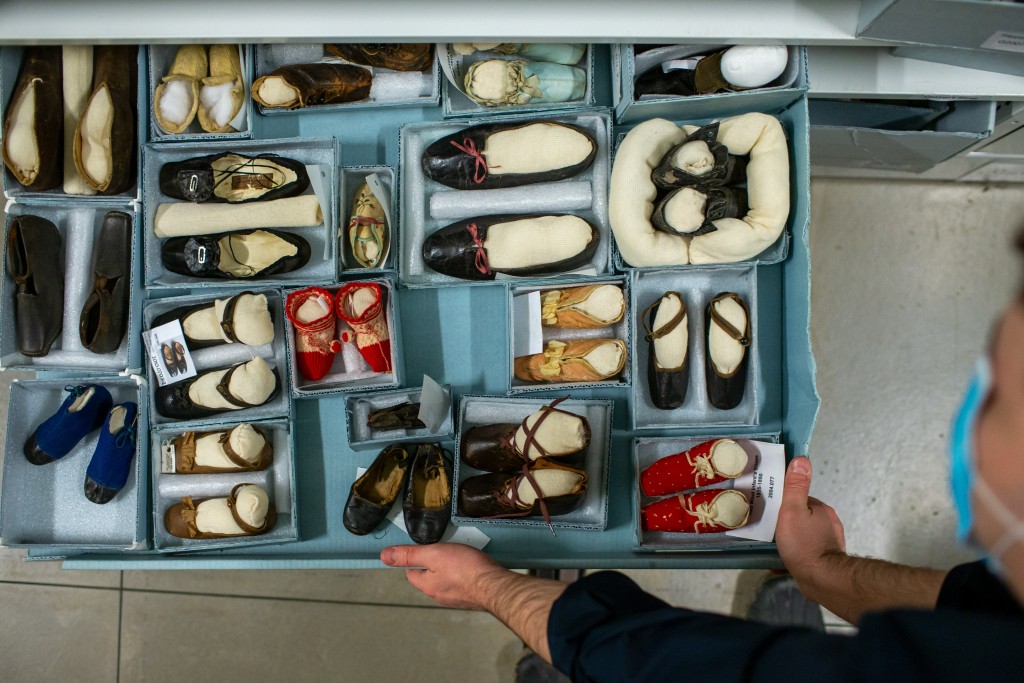 Historic shoes in storage at GCVM; photo by Michael Hanlon

As with the clothing, the shoes in the collection run the gamut of styles, class, and time periods. The most expensive pair of shoes, relative to when they were made and worn, are a pair of cream-colored, satin wedding slippers Anna Hoppin wore to her 1833 wedding to Elisha Dyer, a marriage of two prominent nineteenth-century political families. The couple was married in Providence, Rhode Island, where Dyer would be the future governor. They honeymooned in Niagara Falls, an extremely popular wedding tour destination at the time. During their travels, they stayed at the Cataract House in Buffalo on the banks of the falls and a stop along the Underground Railroad. This firmly placed them in the annals of history as abolition supporters.

The collection has several everyday shoes including a single, very worn, lace-up, flat leather shoe that would have been worn by a man. There are also several pairs of everyday shoes for children.

There is also a pair of men’s boots with elastic side panels for ease of slipping on and off, a similar style to contemporary Chelsea boots and an example of the ever-recurring cycle that fashion seems to be on, even with centuries in between. The museum is actively searching for shoes to expand that aspect of their collection, most notably women’s footwear of the 1890s into the first decade of the twentieth century.

Brooks’s favorite shoe is a very delicate pair of ice blue silk shoes made of beetled linen and kid skin imported from Hiang Shing, a nineteenth century shoe manufacturer and distributor in China. The toe is long and pointed and recalls a style popular during the medieval period. These slippers were most likely the property of a well-to-do woman and worn to a ball or stately event. Although shoes like these tease the senses and give us a glimpse into what we can only imagine was a lavish lifestyle, there is always room for improvement.“We have a desire to expand the collection to represent people that it does not currently represent. I would like to see more clothing representative of the waves of different cultures, identities, and immigration that really made up and populated this country throughout the nineteenth century,” Brooks explains. 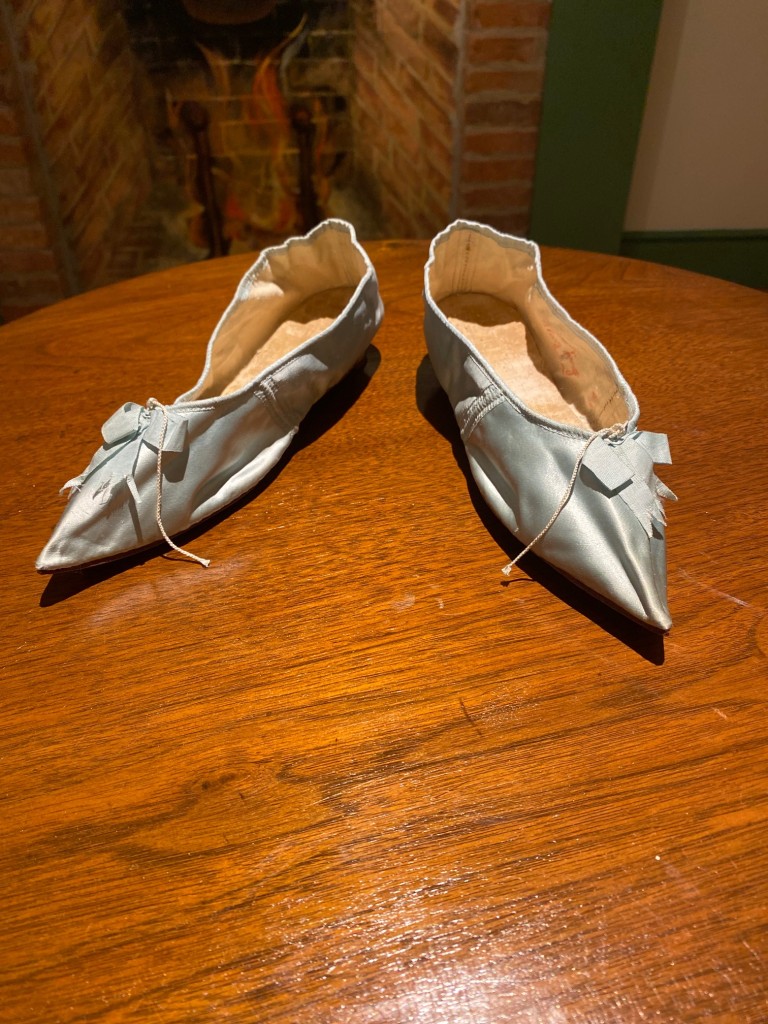 While much of the clothing, shoes, and accessories in the collection are inspired by the great fashion meccas of London and Paris, there are also aspects of quintessential Americana. Hardier and more rugged fabrics were used in America, including substantially more cotton. This was especially true in the nineteenth century due to the exploitation of Africans during the slave trade as well as the mechanization of cotton farming. With advancements in technology and the continued use of enslaved people, cotton not only became the fabric of America but displaced linen as the fabric of choice across the globe.

What the Susan Greene American Costume collection teaches us is that clothing was not always a frivolity. It worked hard for us and with us, absorbing our blood, sweat, and tears, making it some of the most intimate, tangible examples of history and the most rudimentary example of currency in a fledgling country. It should also be obvious that although hundreds of years may separate us from the indigenous and immigrant populations that coveted, cleared, and settled this land, what they wore can still be understood by us, the modern American, as clothes are a universal language that anyone can interpret.