Spirits of the forest

Nature and fantasy mingle in the whimsical art of Anna Overmoyer; photos by Tomas Flint

Anna Overmoyer knew when she was five-years old she wanted to be an artist. “I drew a picture of my grandpa,” she remembers. “And I think it was the wrinkles and age spots that made it such a good likeness.” Creating that picture was a revelation— “Like, this is what I am,” she says. Overmoyer, now thirty and living in Irondequoit, has continued on her own path and has indeed become a successful artist and teacher. She is also very modest. “I’m lucky,” she says. She is from an artistic family, and there was an “endless supply” of watercolors in the house when she was a child. Her father is an architect, and her mother is an artist who has worked in various media, and who is now focused on digital photography. Overmoyer’s grandmother was an art teacher as well.“She was all the things,” says Overmoyer, explaining that her grandmother was a role model for many and a woman who knew even in the 1950s that women could make their ways as professional artists.

The family lived in a rural area in the village of Bloomfield in Ontario County, and the natural surroundings nourished her creativity. Growing up in the woods, she says, “felt like I was in a fairy tale the whole time.” This environment fed her rich imagination and set the tone for her artistic work. She creates both traditional and three-dimensional illustrations, mostly of fairies and other mythical creatures, artwork where nature and fantasy mingle— she loves to imagine the magic that could be happening in the world, just outside the frame of our experience.

Overmoyer went to Bloomfield elementary and high schools and enjoyed an encouraging environment there. She particularly credits her art teacher Amy Wylot, who was amazingly supportive, and, according to Overmoyer, “probably went over budget” to help her create ambitious projects, including one of her first sculptures: a full-scale likeness of a person covered in fairies. 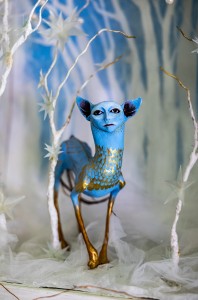 From high school, with her goals in mind, “It was a pretty straight shot” to majoring in art, she notes. She attended the School of Art at Rochester Institute of Technology. This path was more appealing than going to a stand alone art school because she wanted to be surrounded by all types of people rather than just artists.This paid off; she loved the program, where she learned photography and sculpture, and her mentor was dimensional illustrator Bill Finewood. After graduation, Overmoyer returned to RIT to teach illustration. She has been teaching there as an adjunct faculty member for three years. “I work with the same people I was taught by,” she explains. And when Finewood retired, Overmoyer replaced him on the faculty.

The work she is creating now—from traditional illustrations to puppets to three-dimensional fairies in jars and much more—feels deeply original. Imagining fairies is “a very full well” to draw from, Overmoyer says, as it combines natural elements with folklore and spirituality. “There’s just so much to explore in it.” Her artistic influences include English fantasy illustrator and conceptual designer Brian Froud, as well as 3-D illustrator and animator Chris Sickels of Red Nose Studio.

For her 3-D illustrations, Overmoyer uses a lot of polymer clay. During the pandemic, however, polymer clay was less available due to factory shutdowns, so she began using paper clay, which she can make herself. (She explains that yes, this is papier-mâché but can be called paper clay when sculpting with it.) She also uses paint, fiber, and found objects in three dimensional pieces, sometimes finding materials in her own home. She has “a lot of pets,” including two guinea pigs and a cat, as well as an Angora rabbit who hops around the house freely. Occasionally the rabbit’s fur gets into the sculpture, both intentionally and unintentionally. “It’s kind of lovely, little wispy white fur, and sometimes the fairies need hair.”

Overmoyer sells her work through her online shop and exhibits at local shows, including the Clothesline Festival and the Mayday! Underground Crafts and Art event, which will be returning on November 5 and 6 this year after a pandemic hiatus. She does commissioned work as well and recently completed some fairy sculptures for Crumpets restaurant on Monroe Avenue.

This year, her time has been taken up with a forthcoming project that fulfills another lifelong dream: illustrating a picture book. The book is a collaboration with the Bristol Hills Historical Society. She is in the process of creating about thirty illustrations for History and Mystery: The Interpreted Folklore and Legends of the Bristol Hills. “I’m very excited about it, obviously,” she says. The Bristol Hills area of the Finger Lakes is very rich in history, and there are several fascinating local ghost stories as well as Native American legends and other lore surrounding the area. Each illustration will accompany a story or a legend and is commissioned by one of the residents of Bristol Hills, so“there will be a lot of different voices in there.” Among the stories will be a legend about the creation of the Finger Lakes, a tale of a haunted Grange building, and a story about local legend Rattlesnake Pete. Overmoyer is taking a semester off from teaching to complete the illustrations.The watercolor and ink creations are fairly time consuming—just one illustration takes about two weeks. After confirming the concept, she creates a sketch, asks for feedback, and then creates another sketch, so there is some back and forth. “So, it’s a very grassroots kind of project.” She’s enjoying the process, and an editor is unifying the stories and making the volume flow. She is very happy to be a part of this book and enjoys the fact that “it feels bigger than me.” The book will be available in the spring of 2023—more information, as well as samples of the prose and illustrations can be found at bristolhillshistory.org/history-and-mystery 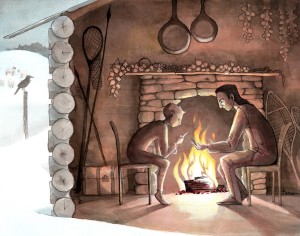 When asked what she hopes people will take away from her art, she says “I see my art as being sort of escapism escaping the mundane.” She hopes that her work might encourage people to go outside and look for creatures themselves or to appreciate natural forms. “If this mushroom were to come to life, what would it look like?” See more of her art at anna-overmoyer.square.site.