Spirits of a generation

Grafting is a process where a young stem is joined with an older branch for the common goal of a more productive plant. At the family-owned and -operated Rootstock Ciderworks and Seed and Stone Cidery, they do just that by blending ancient traditions with modern spirits.

As the first post-Prohibition farmstead cidery in the vicinity of Rochester, Rootstock’s notoriety as a powerhouse in the cider industry precedes them. Men’s Health named its Hopped Hard Cider as one of the best ciders of 2021, and Rootstock was nominated for two of USA Today’s Readers’ Choice Travel Awards this past September. 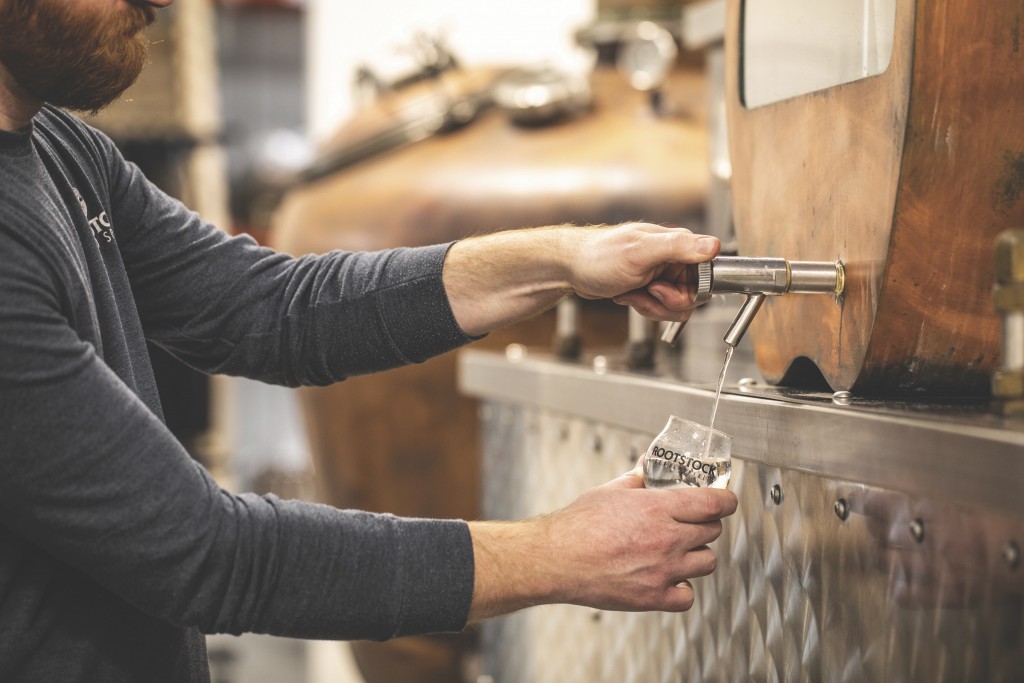 “The idea for Rootstock both as a distillery and a cidery stems from a desire to do more just from the fruit that we’ve been growing for so long and have gained this reputation for growing,” says Luke DeFisher, a fifth-generation apple farmer of DeFisher Fruit Farms and employee of Rootstock.

“My dad, Dave, started the company in 2012, but a lot of it goes back further than that,” DeFisher observes. “We’ve been in apple farming for more than eighty years.”

Growing up on the farm, DeFisher and his two sisters, Elizabeth and Kimberly, developed an intense appreciation for the family trade. So much so, in fact, that all three siblings continue to work on-site in Williamson for the family business. Even their grandfather continues to farm, picking apples that are just right for their family’s cidery.

Most recently, the cidery released its 2020 vintages featuring Ruby Mac, Perry, and Heritage apples. In addition, they collaborated with Imprint Coffee to create a small batch of coffee liqueur.

But it’s not just flavor Rootstock is focused on—they’re also committed to sustainability. Where they once burned apple tree trimmings, they now fragment the wood into smaller pieces and utilize the remaining organic matter in their orchard’s soil to improve its overall quality.  They also employ eco-friendly machinery and generate power from an array of solar panels. While this technology may be a modern addition to the farm, the central idea behind it is wholly generational.

“I think that it kind of stems from a core value of our business, being: using every element of the fruit and using the farm to get the most potential out of it,” says DeFisher. 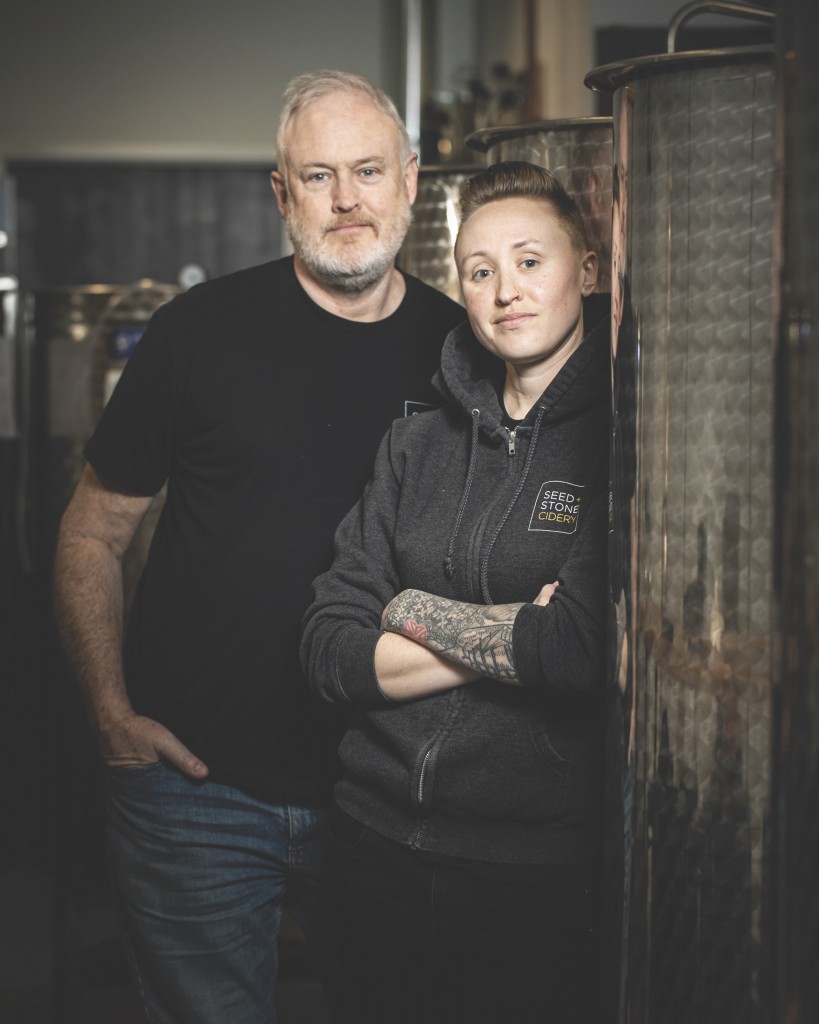 Thirty minutes away in the heart of downtown Rochester, father-daughter duo Bill Bly and Bly Travers operate their own groundbreaking cidery that has Rochester buzzing (literally). Located in the historic Hungerford Building, Seed and Stone is the first urban cidery in the Rochester region. While its origin story may not go back generations, it is in and of itself an incredible journey.

Travers had been working as a sound engineer in Los Angeles but was slowly growing tired of the city. Bly, a then-retiree and self-proclaimed “Type A,” had simultaneously begun brewing beer in his basement. Both were ready for a change. After a year of planning, the time had come.

“I flew out to L.A., got in her car, and took two weeks driving back,” says Bly. “We hit every cidery we could on the way.” 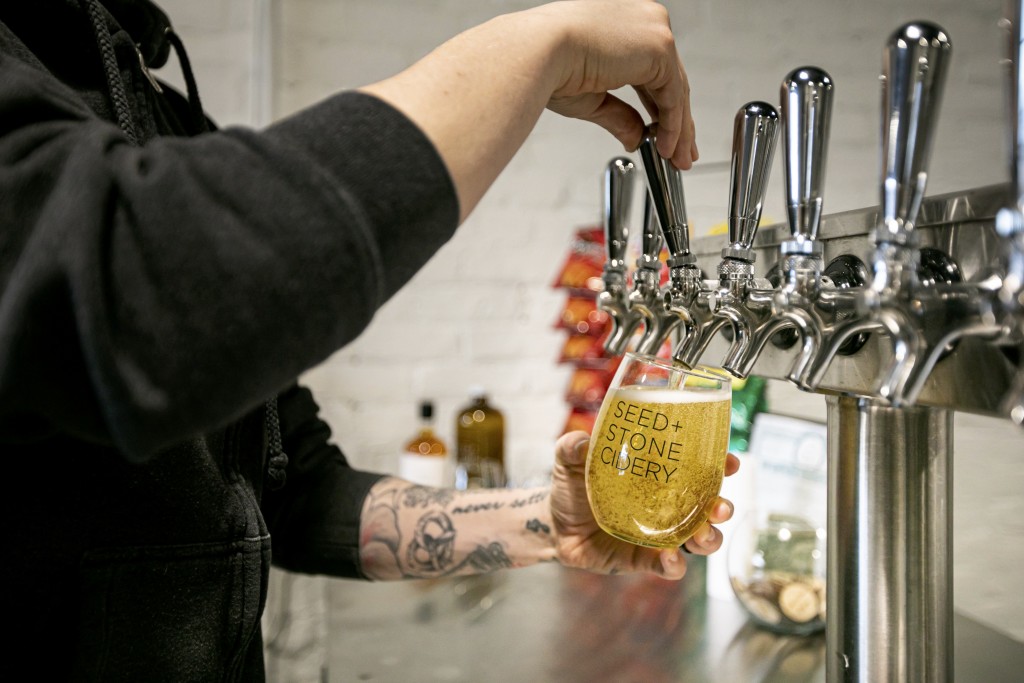 Originally starting as wholesalers in the basement of the Hungerford, the duo officially opened their tasting room in September of 2019. With both outdoor and indoor seating, Seed and Stone is the perfect place for Rochesterians and visitors alike to kick back, relax, and enjoy a freshly made cider. The tasting room’s modern industrial style with minimalist design features is a testament to how the family-owned business brews their spirits: by letting the flavors speak for themselves.

“It takes us anywhere from six months to a year to bring out a cider,” Bly reveals. “We do it very traditionally—we don’t add any chemicals to adjust it and kind of let the cider do its own thing.”

In fact, ingredients are arguably the most significant element of Seed and Stone’s methodology. By subtracting artificial flavors and other non-naturally occurring ingredients, the cidery offers a contemporary option to the conscious consumer.

As a community-oriented cidery, Seed and Stone has partnered with Rochester restaurants on a few spirited collaborations. “We definitely like to try to work with local companies,” Travers shares.

In one instance, Bly and Travers teamed up with Bubby’s BBQ for a flavor experiment. “He actually smoked apples for us, and we cut them up and threw them into the cider for weeks,” Bly says. The result? A smoked-apple sour cider with a robust aftertaste.

On another occasion, Bly asked for Living Roots Wine & Co.’s pressed grape skins used for their chardonnay. Instead of being thrown out, Bly and Travers were able to utilize the leftover skins for a new sweet cider, appropriately called “Skins.”

While both Rootstock and Seed and Stone have formidable futures ahead, the pandemic has inevitably changed each business’s day-to-day operations. With limited seating and tighter restrictions, both cideries now sell their products online. With the uncertainties that the COVID-19 pandemic has brought, it is now more imperative than ever to do our part and support the businesses that have supported us—if not for anything else but to ensure their legacy for generations to come.