The South Wedge’s Crisp is a love letter to Texas cooking; photos by Tomas Flint

It all started at roller derby tryouts. Valerie was already on the team, and Wendi had her heart set on being a Dallas Derby Devil. Fast forward twenty years, the Loyets are now married and a bit more buttoned up. They have two daughters, Clover and Raven; a house; and a business. But they’re still all-in on taking risks together.

Calculated risks, that is.

You see, Valerie is a full-time actuary. Her job brought the family to Rochester in 2018 from Dallas. So when Wendi, the creative one in the relationship, wanted to retire from her marketing career and open a restaurant, they had to make the numbers work.

“[Valerie] brings an acute sense of finance to the business,” says Wendi. “I’m very lucky because she can tell me no. A lot of restauranteurs don’t have that.”

They opened Crisp last year and plan to be around for the long haul. “We’re never going back to Texas,” says Wendi. She loves that we’re a “big small city” and the restaurant scene is exploding. “I’m excited to be a part of that,” she adds.

The establishment sits on the corner of Meigs Street and South Clinton Avenue in the South Wedge. Big windows in the front create a sort of fishbowl vibe. On busy Monday afternoons, like the day I came by, the space is packed with ladies lunching, couples enjoying a meal together, and large groups just catching up.

It’s refreshing to see a place so full of life, especially during the week.

The restaurant’s name has a double meaning. “I like crispy food,” laughs Wendi. Her fondness for fried chicken and biscuits comes from her grandmother, who taught her to cook. “I was always at her side.” 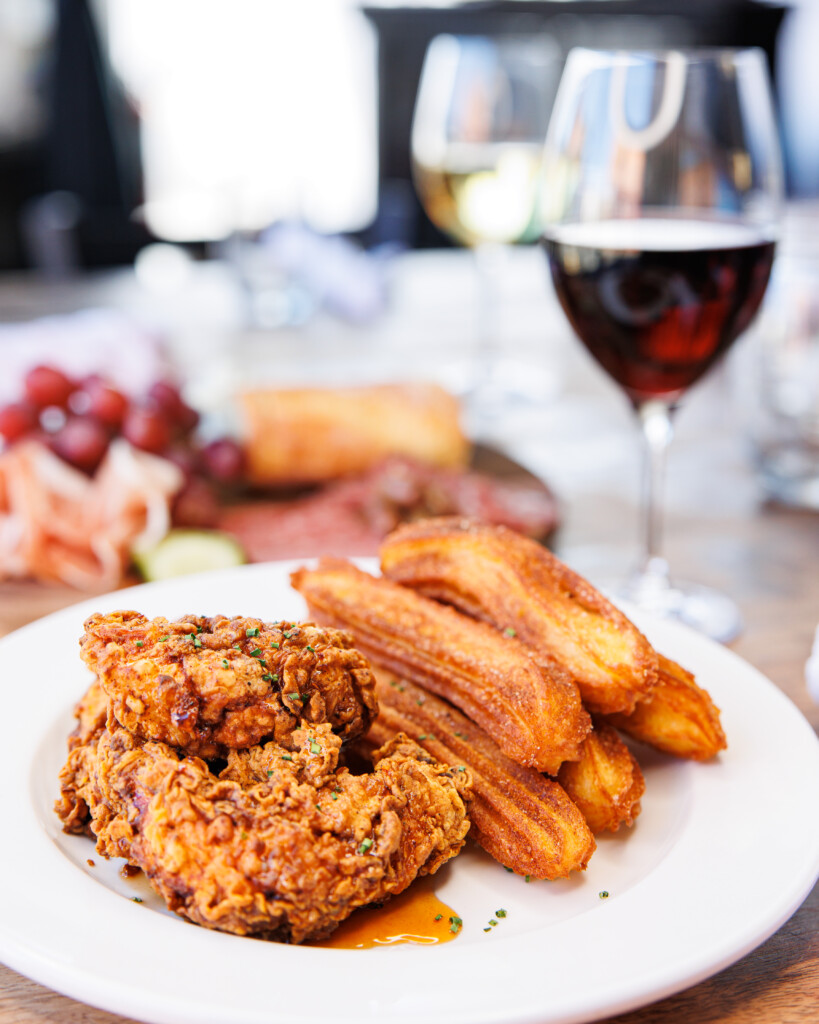 But Crisp also refers to a keen attention to detail. Wendi loves throwing dinner parties and was attracted to creating a space where people could feel comfortable dressed in either sweats or taffeta.

Its Texas-inspired menu has become quite the destination for brunch on Sundays and Mondays. And it’s not the pinkies-up stuff you might find at other spots. They’re doing buttermilk fried chicken and churros ($21), breakfast nachos with spicy chorizo ($16), and a gravy-drenched take on eggs benedict ($14).

The restaurant’s executive chef Jimmy Ton, who worked in restaurants on the West Coast, incorporates his flare with chilaquiles. ($16), breakfast burritos ($15), and an ahi tartare ($14) that some have said is the best they’ve ever had.

It was their Tex-Mex sensibility that first caught my attention and made my mouth water waiting to get a reservation. Like Wendi, I, too, love stick-to-your-ribs fried food—and all the better if it’s covered in gravy. Yet, it was the special touches that made my meal memorable.

I came in with a case of the Mondays, and I was delighted to find a cinnamon maple cappuccino ($7) on the menu. The slightly-sweet, frothed drink reminded me of a beverage I might sip during the holidays: warming and cozy, like shearling-lined slippers or a cashmere sweater. Foamy milk stuck to my lip, and it made me smile.

Another standout was the Triple B ($10), which stands for the holy trinity at this place: bacon, biscuits, and butter. I could write a review on these three elements alone, but I’ll keep it brief. Their thick-cut “Billionaire Bacon” is a little crispy, yet still flexible, the way I like it. Each perfect strip is candied and dotted with pepper flakes, creating an addictive sweet-spicy-salty combination. You can order it for brunch or dinner, which feels so right.

The two house-made buttermilk biscuits are the ultra-crumbly variety, suggesting copious amounts of butter are used to make them. They’re the perfect vehicle for whipped butter. I’m pretty sure even shoe leather would taste delicious slathered in this salty-sweet stuff.

I could have stopped there and been happy, but there were still entrees to sample.

Chicken-fried steak has always been a favorite to order when I’m visiting family in Arizona, and Crisp’s version, the Texas Breakfast ($24), is an especially good one. The Angus steak is tenderized to perfection, then battered, fried, and smothered in white gravy.When I cut into it with a butter knife—an excellent sign—its deliciously crunchy shell collapsed with a touch.

Along with the heaping amount of beef comes home fries, two eggs, and (another) biscuit. The portion was so generous that I needed my dining companion’s help to finish it.

I’m also looking forward to seeing how the Loyets throw a party. Besides being a great spot to grab a meal, the restaurant boasts a forty-five-seat event space in the back. Right now, they keep it simple with long wooden tables and family or buffet-style fare.They’ve hosted wedding rehearsal dinners, and they’re looking to grow.

One of those ways is engaging the community. After receiving an anonymous homophobic letter in June, people in the area flooded in to support them. “If I could send him a thank you note, I would,” Wendi says. 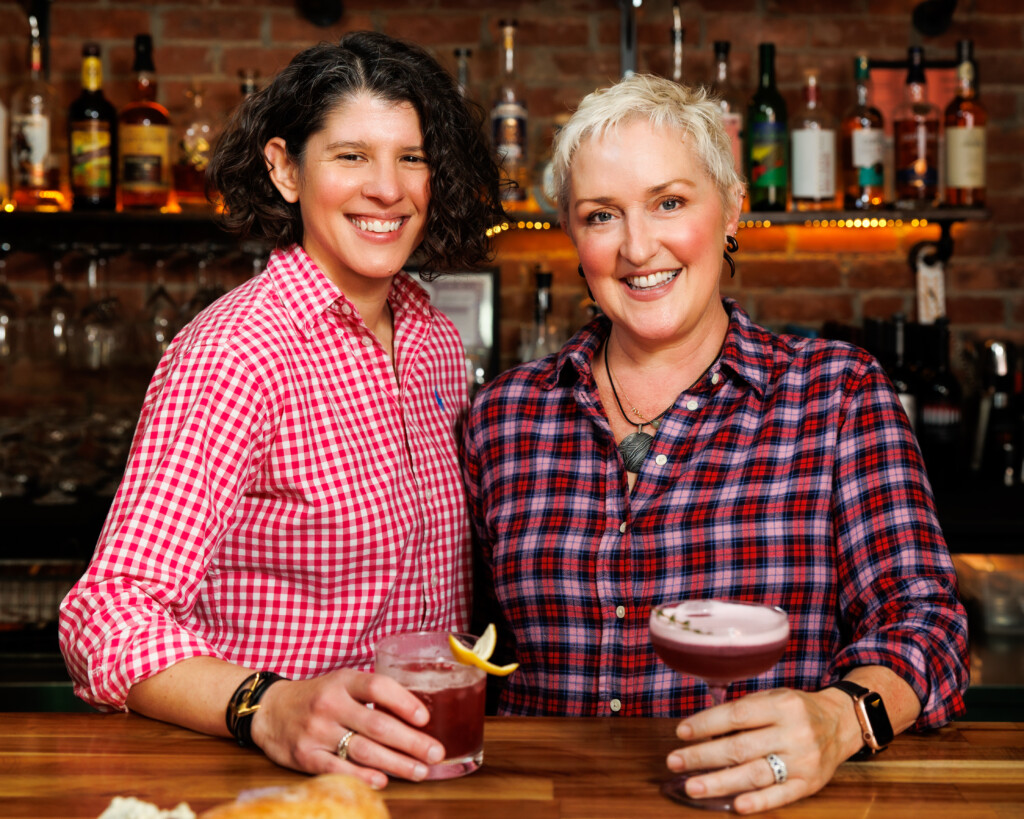 Since then they hosted a big party at the restaurant during Pride along with many karaoke nights. The owners are proud to be a safe space for the LGBTQ+ community—and anyone needing a place to unwind.

The couple is eager to set down roots here, and they see the restaurant as part of that. Over Thanksgiving, they threw a party for their thirty employees. Wendi and Valerie cooked for them, and it was a fun time. “Most of our staff feel like this is their home,” Wendi says. “We try to take good care of them when they need us.” While opening a restaurant in the middle of a pandemic is a risk, for the Loyets, it’s about something more. “We want to build a family here,” Wendi says.