Come for the oysters—stay for the friendly atmosphere

When I see oysters on a menu, I get a little frenzied. 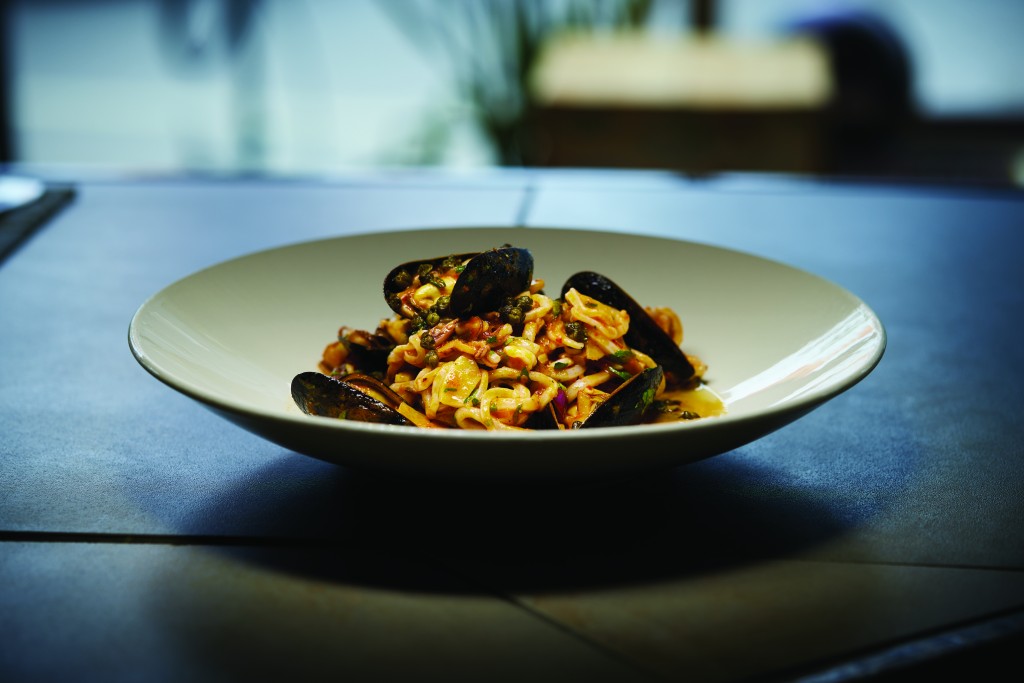 On my twenty-second birthday, I went to a restaurant specifically for its happy hour special on oysters. They were one dollar each before 7 p.m., and I ordered forty-eight for myself before I lost count—each plump gulp more complex than the last, the layers of crisp salinity becoming more addictive and irresistible when washed down with a splash of white wine.

Eating oysters is like taking shots—they’re joyful and spontaneous—without any of the unpleasant side effects. No one gets full on oysters. And they’re not even an appetizer, really. They’re more of a ritual to start off a remarkable sort of occasion.

I don’t eat oysters a lot these days. Since we’re closer to the Great Lakes than any ocean, I’m usually skeptical of raw fish here.

But when a coworker mentioned a new seafood bar had opened downtown, I felt a small glimmer of hope. Plenty of places serve the occasional bouillabaisse, but an upscale fish restaurant is rare in these parts.

Checking out the website, I was giddy with excitement and not just because I hadn’t gone out to eat in months. There were oysters on the menu.

Rella is in a flatiron building on the corner of Marshall Street and Monroe Avenue in the Wadsworth Square neighborhood. Inside, the restaurant feels like the bow of a ship with a large, triangle-shaped bar that spans the entire room. Executive chef Cruz Nieves and his team of impressive cooks prepare dishes in the center of the action right before their guests.

He was working at Rocco when the owner, Mark Cupolo, approached him about opening a pizza restaurant. After some negotiation, they landed on a wine bar with fresh seafood instead.

The name Rella comes from Cupolo’s nickname for his wife, Cindy.

Considering my partner and I had only talked to one another and a small, close-knit group for a year—but who’s counting—it felt surreal to be in a space with an open kitchen like Rella. It was like seeing theater unfold before our eyes. Nieves removed sheets of fluffy Parker House rolls from the oven. He’d tease his sous chef Ricardo Pina as he plated a dessert. Suddenly I realized how much I had missed watching the drama of fine dining.

We ordered some wine to start. Here, affordable Italian wines are the name of the game. The menu ranges from crisp, minerally whites—perfect for seafood—to bold, luscious reds. Everything is available by the glass ($10) and by the bottle for a flat $38. As a relative novice to Italian wines, I asked for something citrusy and dry, and I was delighted with the glass he poured.

“The whole idea behind this was to have a wine bar with food,” Nieves says. Along with wine, they have a small beer selection. “A lot of people come after work because it’s super chill, and you can have a drink and have a couple bites. Our dishes are small enough that you can share one, or, if you want to come for dinner, you can order a bit more.”

Next came the oysters, which felt like coming home. Tonight, they had ones from Prince Edward Island, which are prized for their sweetness, yet with clean salinity. Like their New England neighbors, they’re on the smaller side but have a distinctive flavor of the sea.

Toward the back of the kitchen, one of the cooks shucked each bivalve to order—ensuring its freshness. Domingo had never shucked an oyster before working at Rella. After Nieves showed him the ropes, he’s now the in-house expert, creating magic during dinner service.

“It’s all about how you shuck the oysters and how you treat them that’s going to give you a great product,” Nieves says. “He does it with such care, and he makes sure the oysters are perfect every time.”

Since we were celebrating, you know, being outside of our house and back into society, we ordered a dozen (priced $3 each or $15 for half a dozen). These were plump and filled with a bit of oceany brine. They arrived on crushed ice with cocktail sauce and a bit of carrot-shallot mignonette. It looked like crushed orange gems scattered over each half shell. And they were magnificent.

Rella’s attention to seafood shows. Like in the shrimp salad, our next dish, juicy sliced shrimp were paired with a crunchy shredded cabbage, fingerling potatoes, and bright ginger-lime vinaigrette. The flavors and textures amplify the delicate shellfish beautifully.

It only took me to the second course to notice Nieves and Pina change their small plates often. At this point, a woman dressed in professional clothes and her friend sipped glasses of wine a few seats away, and a few clusters of regulars were across the bar from us. Conversations about “the sliders from last time” or “the incredible ice cream” from a meal before grew from all around the bar.

“As long as it’s good, I’ll buy it,” Nieves says. “My thing is finding the best.” Besides getting high-quality seafood shipped overnight from his purveyor, he shops at the Public Market and gets foraged ingredients, like chanterelles, from customers. “Sometimes I get stuff [and] I don’t even know what I’m going to do with it,” he laughs.

Tonight, one of his creations was a fried chicken slider with spicy crab salad. Each bite tasted like the most exquisite, crispy crab cake I’d ever eaten. While the menu changes daily, the oysters and sliders, with various fillings, are standbys. Tomorrow there would be another slider to take its place. 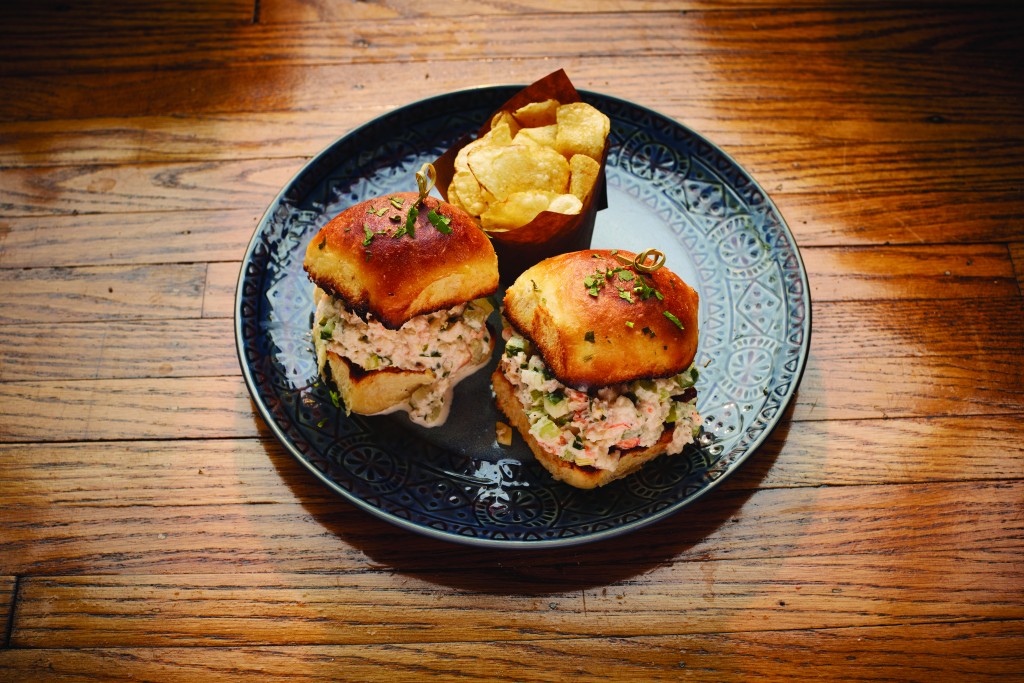 After watching Nieves plate a few orders of another special, the saffron risotto, my dining companion and I decided to jump on one for ourselves. Our eyes were bigger than our stomachs, but we were feeling spontaneous and the fall-apart lamb shank on top looked incredible.

The portion was generous, so we grazed a little while chatting with Nieves and the group of women beside us.

Though we were newcomers, it felt nice to be included in their community, to meet new people and, for once, try flavors that broke from our usual routine. It’s the kind of place where you immediately feel comfortable. You want it to be your neighborhood place, even if you don’t live close by.

When our cornbread ice cream came for dessert, we almost didn’t want to leave, the evening had felt so jubilant. Each dish was more delicious than the next, and it became all the more irresistible when washed down with a splash of white wine.

With the year we’ve all had, we need more places like Rella where we can hang out, be a little spontaneous, and revel in the joy of being with people. We need the ritual of eating oysters to celebrate remarkable nights out like these.