Just when you thought you knew everything about the market ...

It is May. Spring is here … probably. (True-blue Rochestarians know you can’t be certain until after Mother’s Day.) If your winter weary soul needs a lift, it is time to go to the City of Rochester’s Public Market, one of the very best parts of living in Rochester. Here you can see the definitive signs of spring in May—an abundance of asparagus and peas at local farmers’ tables. Did you know that you can also get a smudge stick to shake off that winter energy? A vegan chocolate cake slice to remind you good things are to come? A fruit smoothie to give you tropical feels? Perhaps a one-pound burrito before you start telling yourself that it’s salad season? Read on for the scoop on some of the less explored spots at the Rochester Public Market. 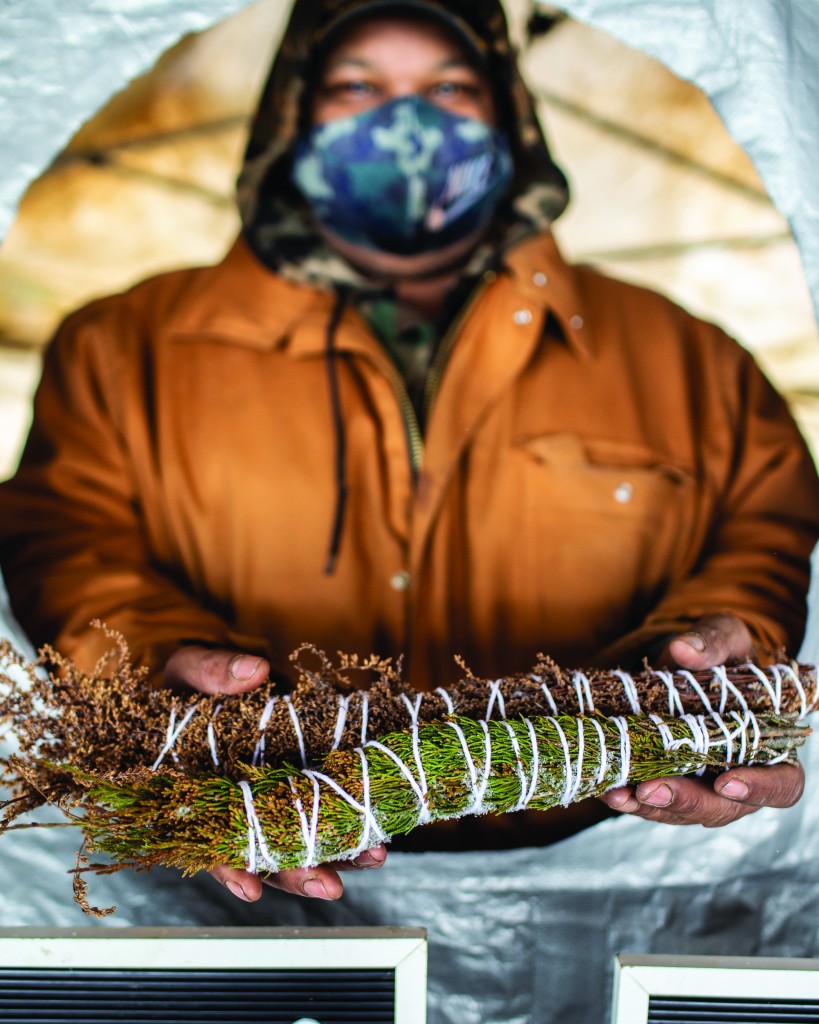 Foraging is a trend that is starting to take off in Rochester. Flowers, however, is an old hand at this. He only sells things harvested, foraged or created from what is grown on his property. During the (short) growing season, he offers a mix of the usual and lesser-known produce bounty of the season (his fans list turnips, ramps, leeks, and pursulane as some of their favorite finds here).

In the winter, when everything seems dead, Flowers still has a full table of creations to help one soldier through the cold and short days. Smudge sticks may seem like they popped into the modern hipster culture from nowhere. Let’s set the record straight—smudge sticks have established roots in Native American culture. Smudging is the practice of burning certain herbs/plants as part of specific spiritual ceremonies (e.g., blessing people, purifying energy). You can find a variety of smudge sticks at Flowers’s table. My personal favorites are the mugwort smudge sticks. Mugwort is said to remove negative energy and even encourage dreaming. The sweet grass one has a gently sweet smell that’s pleasing. As a bonus, it also helps draw positive feelings and spirits. In the winter, when you know a cold is around the corner, get some mullein tea. It is basically nature’s Nyquil—known to ease coughing, break up congestion, and encourage sleep.

You may never know what Flowers has available at the table when you stop by but do not fear—you can always count on a kind and knowledgeable person to answer your questions. 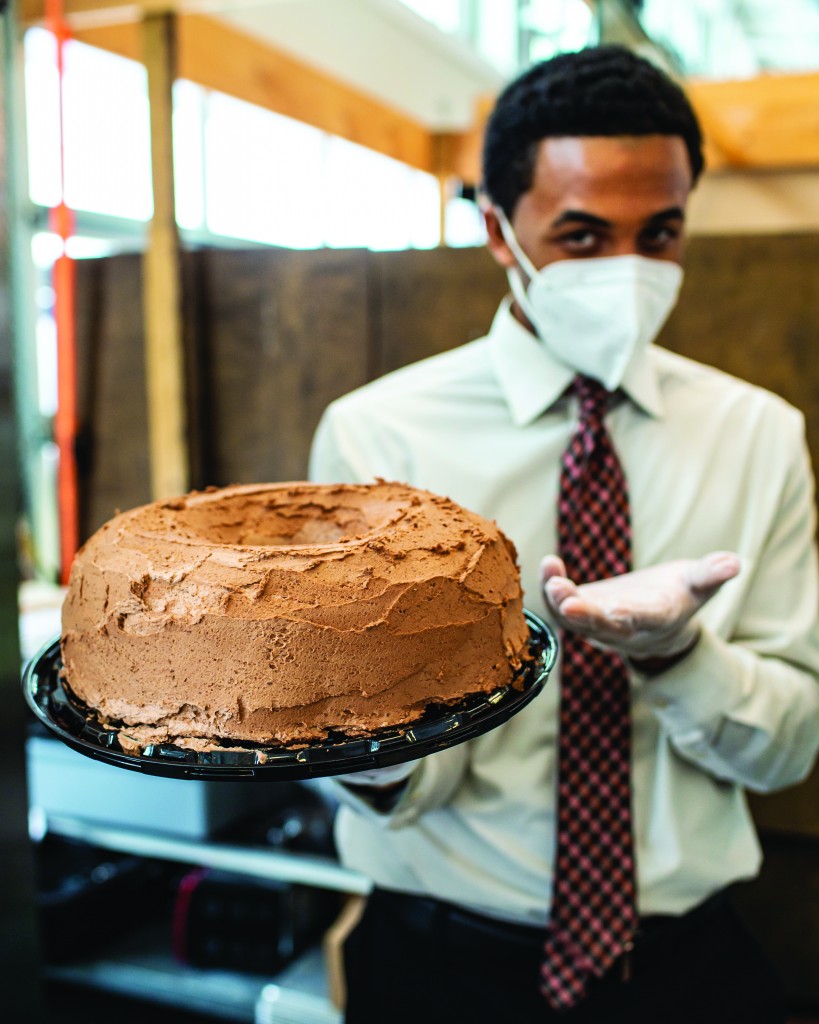 (located in Indoor Shed B)

In the sea of sweatpants-chic at the market you can pick out Asad Muhammad easily. He is the one wearing a dress shirt, pressed pants, and a tie. Muhammad founded Taste of Supreme in 2011 to bring nutritious desserts to Rochester. You will never guess the main ingredient in Taste of Supreme’s most well-known dessert. Ok, you might because it is in the name. Bean Supreme Pie—the name might make you doubtful, but the first smooth and spiced bite will leave you a believer. All the times we have hoped and wished for dessert to be healthy … this gets close to making that dream a reality.

The desserts run the gamut from bean supreme pie to chocolate cake. Leave your vegan baked goods misconceptions at the door—the chocolate cake may cause you to question the need for butter and eggs. The moist cake crumb and the luscious chocolate fudgy frosting are vegan. In my decidedly nonmedical opinion, this makes the chocolate cake dangerously close to a salad. Isn’t that kind of logic what dreams are made of? 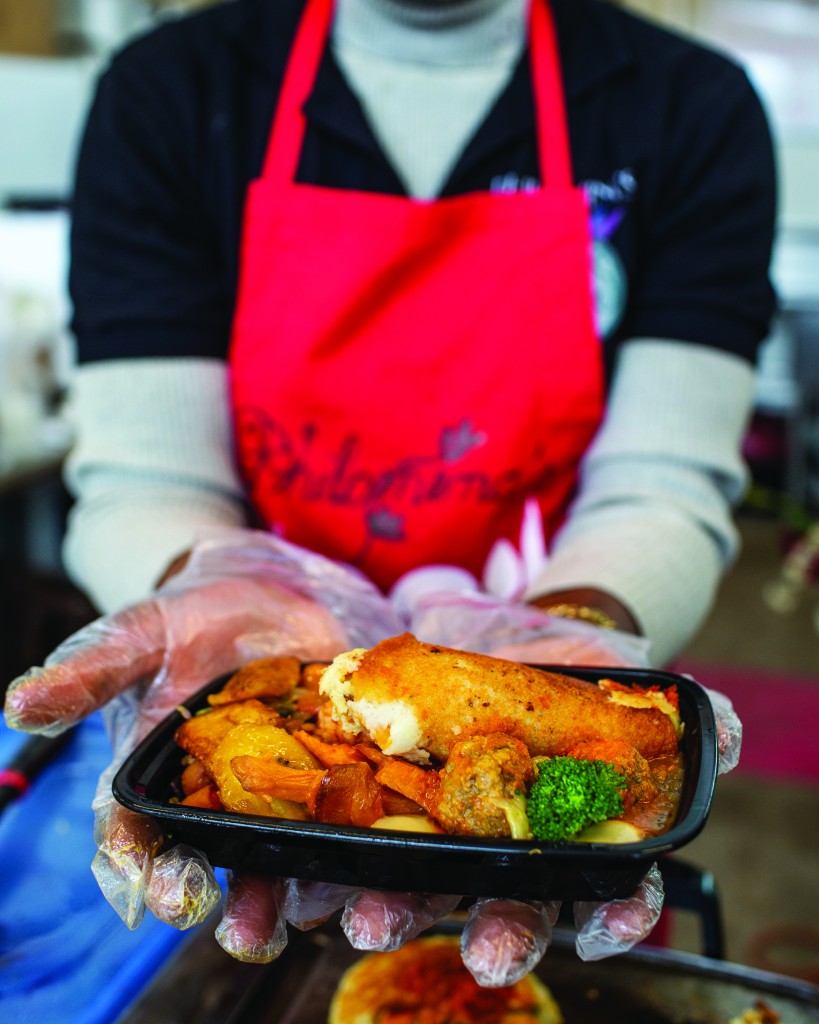 (located in Indoor Shed B)

Philomina Emeka-Iheukwu’s culinary creations focus on health first, but upon trying her selections, taste is surely tied for first place. Upon moving to the United States from Nigeria, Emeka-Iheukwu discovered the struggle of eating nutritiously here. Her hot, table-style offerings have something for everyone—the picky eater, the one who wants to have to Google every dish’s origins (read: me), the self-declared meat eater, or the health-focused vegan. She even has a spicy seasoning for heat seekers (read: still me). I had a hard time choosing among the lentils, chicken stew, turkey meatball stew, or jollof. In the spirit of investigative journalism, I tried it all. You can’t go wrong here—the lentils were cooked perfectly, the chicken was tender, the turkey meatball was juicy, and the jollof rice was the perfect canvas for all the sauces and drippings. You can also get a variety of fruit juices and smoothies.

One’s physical health and tastebuds will benefit from her cooking, and one’s spirits can’t help but be lifted by Emeka-Iheukwu’s genuinely sweet personality.

(located in Shed A by Union Street)

From South Avenue to the Rochester Public Market, Paola’s has been around Rochester for more than two decades. At the Public Market, Paola’s is run from out of a small food cart. The speed at which they churn out tacos and burritos is impressive. All the meats are stewed or grilled ahead of time. Once you order, the owner goes to work to assemble the food immediately. Paola’s is not where one goes for birria or chicken tinga. They focus on the more well-known American take on Mexican food. Think great steak tacos and giant cheesy burritos. Where else in Rochester can you get a one-pound burrito for $7? In order to use my stomach space optimally, I had to go with a baby (breakfast) burrito. For $5, I got a sizable breakfast of eggs, cheese, potatoes, and hot sauce (optional), expertly wrapped. I was able to eat and walk—an important quality for a market breakfast.

When you want hearty food that’s tasty without being fussy and will not take a toll on your wallet—Paola’s has you covered.