As we look toward the future, there are Rochester traditions coming back that many of us are excited for. The Rochester Fringe Festival comes to mind almost immediately. A staple in the arts festival circuit for the past ten years, the Fringe brings a uniquely Rochester flavor, celebrating the artistic soul so many of us cherish about this area.

Fringe began as a conversation more than twelve years ago between then president of the University of Rochester Joel Seligman, Erica Fee, and several other Rochester stakeholders. With the ever-circling creative cloud that is Rochester’s art scene, a Fringe Festival seemed like the perfect fit for the area. Fee, founding producer and board president of the annual Rochester Fringe, points out, “I knew that we had many talented performing arts groups for a city our size, a plethora of young people due to our many institutions of higher education, and audiences hungry for new work.”

Were they ever right. In the decade that Fringe has been part of Rochester, more than 500,000 visitors have descended upon the city for the festival to attend more than 4,000 performances and creative events. According to the website, “… Rochester’s not-for-profit Fringe has become one of the largest and most successful fringe festivals in the nation, the largest multidisciplinary performing arts festival in New York State …” all in one short decade. Of course, being who we are, Rochester’s Fringe is known and revered for its creative take on an already creative event. The style of the festival has been dubbed “bifurcated” to denote its dual character. There are the events that are directly brought on by the organizers, but there is also artistic independence carried forth by each venue, which curates the performances it wants to produce from a group of applications. It is also important to note that since the beginning of the Fringe, many outdoor venues have been included that offer free events, ensuring that as much of the Fringe Festival is as accessible as possible. 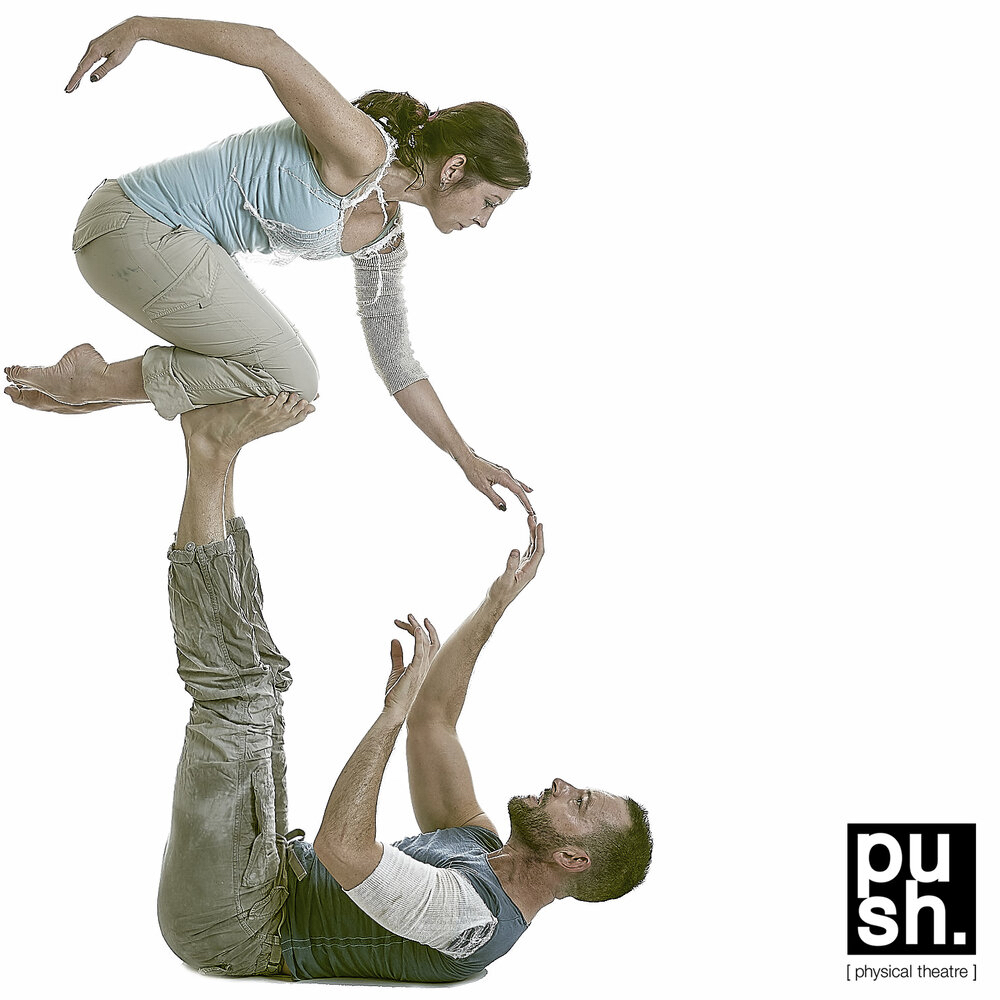 Since the beginning of the Fringe, there has been PUSH Physical Theatre. Darren and Heather Stevenson, the husband-and-wife duo behind the one-of-a-kind movement troupe, were a part of the first conversations bringing the Fringe to life, and they have taken part ever since. PUSH Physical Theatre is just what the Fringe wants to embody: an exciting and surprising antithesis to traditional theatre and the performing arts that has a very community-centric mission.

PUSH Physical Theatre came from a place of exploration and passion for unknown movement practices and the stories that can be told through the medium. Heather and Darren met at a conservatory in St. Louis and say that their dedication to play, exploring the humanity of play, and how it can help us all thrive is at the core of PUSH. To tell stories as authentically as possible, Darren and Heather started pulling styles of movement and theatrics from wherever they could, shying away from the traditions of conventional movement-based mediums. The choreography is heavily mime and partner-weight-bearing–based with a sprinkle of dance and acrobatics. “There wasn’t another option for us. This is what we were doing. The sense of play we’ve kept about our lives has helped us,” Heather puts simply.

PUSH is its own living organism. With every new performer who joins the troupe, new life experiences, ideas, and trainings are folded into the larger amalgamation. The company is always transforming, learning new techniques, and telling alternative stories. “Even our choreography—nothing is sacred. When new members come in and are learning current choreography, if they say, “Hey, there’s this thing I can do, what if we … ?” we say great, let’s change the choreography,” says Darren. As PUSH grows and evolves, their desire for collaboration has increased.

Most recently, PUSH has teamed up with artist Penny Sterling, a writer from Rochester who until 2014 was living as a man. As her bio states, “[S]he finally admitted to herself that she was transgender, and eighteen months later she began living her authentic life. …” With Sterling’s humorous and vulnerable story that she is more than willing to share with the public and PUSH’s desire to use its platform to transform people, this collaboration seemed a match made in theater heaven. The idea of transformation is integral to both PUSH’s mission and Sterling’s story and one that they will gladly tell together. As Darren puts it, “We were saying our goal is transformation; we want to change minds. Penny said, ‘I’m not about changing minds; I want to change feelings.’” They slated the project for next year to be performed at Blackfriar’s Theatre. PUSH does not shy away from telling the most challenging stories or the things that people are most afraid of.

A unique voice of the arts, PUSH has had many memorable performances. Perhaps the most striking in recent memory is the aptly named “Trunk Show” piece, available only electronically during the 2020 Fringe. Two company members, Heather and Ashley, physically folded themselves into a trunk representing that instead of pushing against the restraints of our quarantine and the heavy burdens of a pandemic world, there is beauty in embracing it. “Instead of wasting our energy being frustrated … the beauty of art is that we take restriction and take advantage of that thing and it becomes the medium for our work,” says Darren. 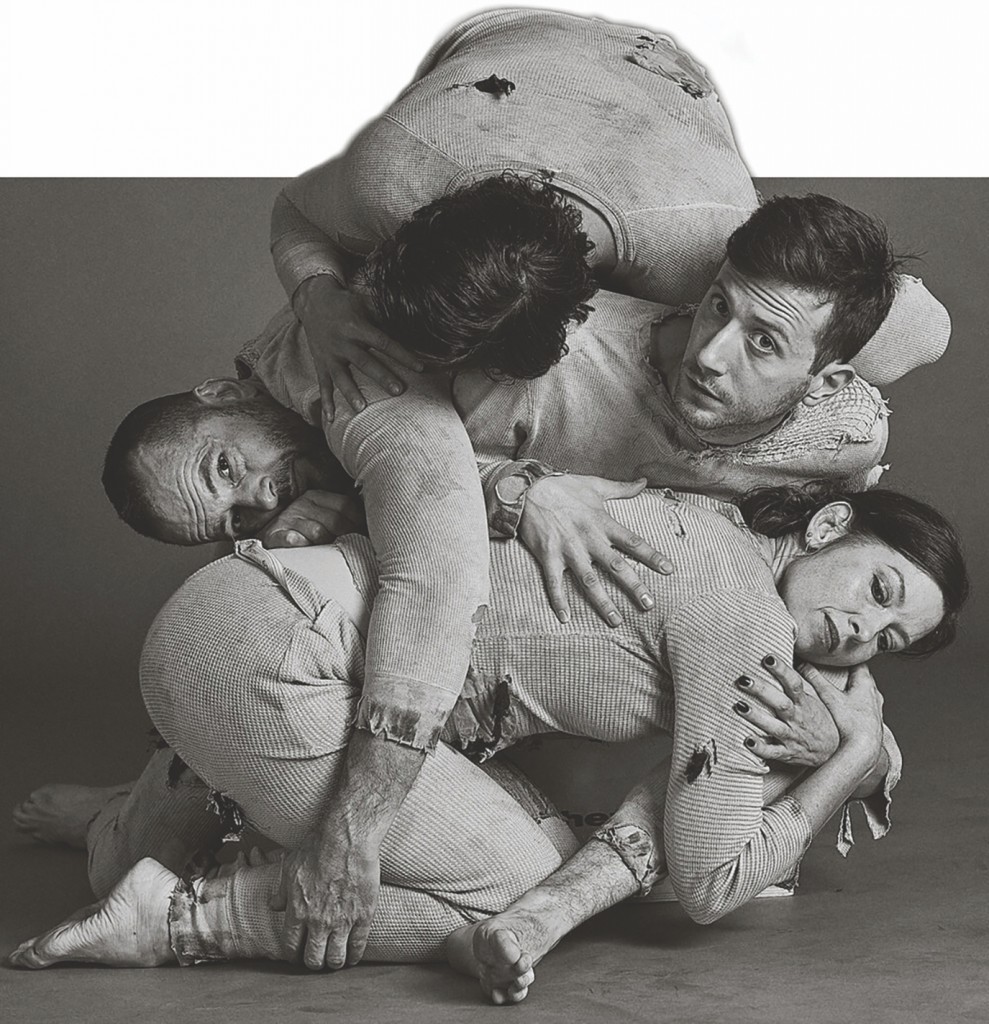 PUSH Physical Theatre is proud of its identity as a community-based project. Audience feedback is so important to the group that they offer free previews of new projects, inviting the public to watch and comment. This was exactly why the Stevensons chose Rochester. Two nonnative Rochesterians, living in other major cities did not give them the sense of community they yearned for. Finally finding a place among the experimental and new theater that was happening all over the city, they felt like they had found their home, not only for their family but also for PUSH. A community of support, groups of people who are excited by others’ works made the area so inviting and made the Stevensons call Rochester their home for the past twenty years.

As with other performance groups, PUSH participated in the 2020 Fringe entirely digitally. Along with other artists, the virtual festival consisted of more than 170 performances available both on-demand and via live streaming. Inevitably, Fringe will also look different this year. Because of the pandemic, performing arts organizations have been hit especially hard and therefore need more time to recover. There will be twenty-five performance spaces with an additional online component; however, many of the festival’s long-standing venues will still be closed by the time 2021 Fringe debuts on September 14. But the future continues to look bright for the Fringe, with no signs of slowing down. When asked what the future of the Fringe looks like, Fee stated, “We hope to continue the important work of amplifying the performing arts, connecting artists with venues, and aiding the area’s arts eco-system.”

Wrapping the truth in a smile

You raise me up