Pride beyond the floats

In May of 1971—more than fifty years ago—the Rochester Gay Liberation Front organized its first official gay pride event, a well-attended (300 guests) picnic in Genesee Valley Park. In the decades since, Rochester’s LGBTQIA+ pride events have grown in breadth and depth with the annual Pride Parade becoming a prominent focal point.

Most cities celebrate LGBTQIA+ pride in June. Rochester, on the other hand, holds its festivities in July so that people coming from other states can participate. And, while the Pride Parade serves as a key aspect of Rochester’s celebration, the local community also hosts several other notable pride events throughout July.

A recent addition to the local event line-up, Rochester’s Queer Craft Sale is now in its third year. Jules Mack, the primary organizer, holds this annual event in her own front yard.

“I like having it [on my property],” she says, “because it gives me the freedom to do what I want with the space. I can keep set-up costs at a minimum, which makes the event accessible to all artists, particularly those who are just starting out and maybe don’t have a ton of funds and pro materials yet but make an awesome product.” 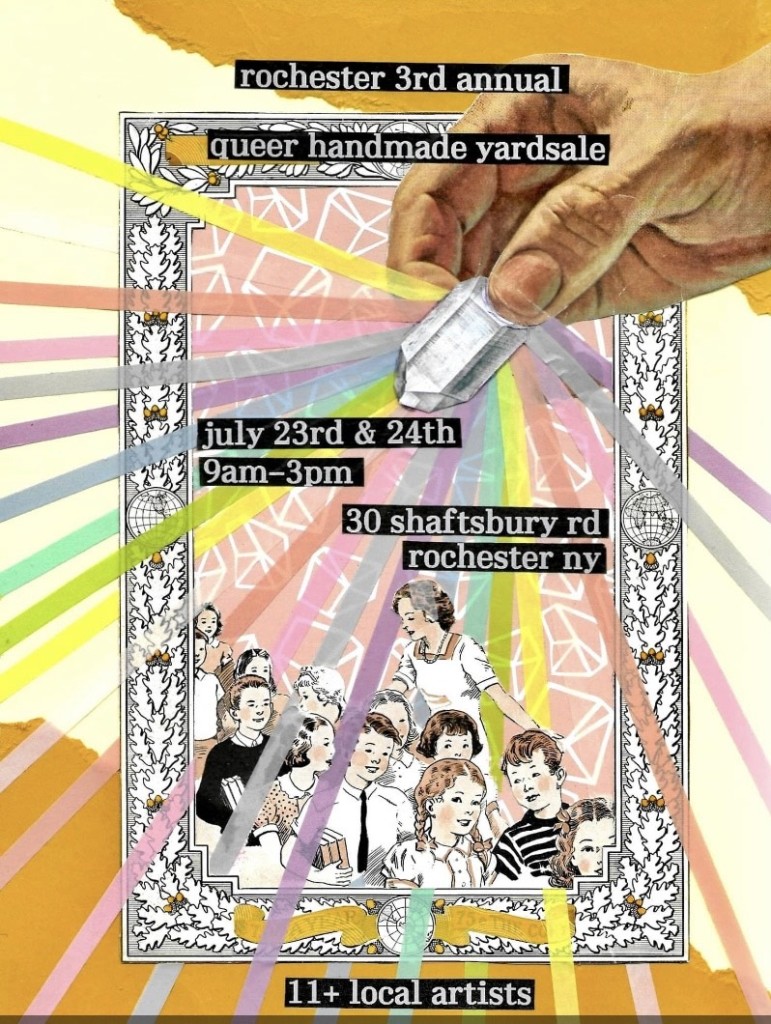 Mack notes that vendors—a few of whom are still in grade school—are not required to pay a participation fee. Instead, she relies upon a “cost share” model where vendors have the option of donating whatever they can afford. Many of the artists have never participated in a show before, so Mack finds it personally fulfilling to watch newcomers thrive.

“There are two things I’ve always wanted to do,” says Mack. “Start a craft sale and hold an event to support queer artists.With many pride-related activities on pause due to COVID, 2020 felt like the perfect time to combine my interests and explore this option.”

Mack is a social worker as well as an active member of the local queer artist community. Originally interested in jewelry making, Mack later expanded upon her interest in knots and started a business creating macramé, which she sells at the Rochester Queer Craft Sale and other community shows.

Mack says, “If you identify as a member of the queer community, we are always looking for other artists.” Rochester’s Queer Craft Sale is set for July 23 and 24, 2022, 30 Shaftsbury Rd, Rochester.

If crafts are not your thing but you still want to be involved in local pride efforts, the Rochester Red Wings Pride Night on July 13 is worth checking out.

The popular event, which caters to both sports aficionados and the more casual fan, unites community members for food, fireworks, giveaways, and, of course, baseball all around a central theme of LGBTQIA+ inclusion.

Dan Mason, general manager of the Rochester Red Wings, says, “There is a phenomenal energy in the ballpark on Pride Night. It’s great to get feedback from members of the LGBTQ community letting us know how appreciative they are and how welcomed they feel.”

“Pride Night was one of the top crowds of the 2019 season,” Mason adds, sharing that after COVID-19 paused the event in 2020 and again in 2021, the Frontier Field staff anticipate another successful Pride Night this season.

“Pride isn’t the only time we strive to be inclusive, though,” says Mason. “We also utilize inclusive hiring practices and host other events like Autism Awareness Day and our Women in Sports night.”

In addition to art and sport-focused events, Rochester’s LGBTQIA+ community also celebrates its legacy with music. On July 9, the Rochester Gay Men’s Chorus (RGMC) will celebrate pride through ROC’N Rainbow, a summer concert hosted by the School of the Arts (SOTA).The Rochettes, the Teddy Bears, the Rochester Women’s Community Chorus, and the Flower City Pride Band will also perform, both independently and alongside the focal group.

Jim Janssen, GMC’s operations director, has been involved in the chorus for more than twenty-four years.

“Our mission is to create social change through excellence in choral arts, and that is what we do every time [the singers] get on stage,” says Janssen. “Many of our members have [deeply personal] coming-out stories, and it is always great to watch a new performer for the first time.”

RGMC, now in its fortieth season, is an inclusive group. Anyone who sings bass, baritone, first tenor, or second tenor can audition.

In addition to ROC’N Rainbow, RGMC’s July calendar includes the Red Wings Pride Night and aN LGBTQIA+ Pride service at Temple Sinai. “I enjoy the completion of a performance, knowing that the group has been able to sing out loud and proud for the community,” says Janssen.

Rochester Black Pride is currently undergoing a structural redesign as it solidifies its niche within the Rochester community. Board president Chanel Anita has been with the group for the past six years and recently moved from a volunteer role to a key part of the planning team.

With the aim of creating a version of pride that is more inclusive to the BIPOC community, Rochester Black Pride holds its own annual festival, now in its seventh year.

Anita refers to the event as “a Rochester-grown festival for Rochesterians.” The 2022 festival is set for July 29–31.

Anita discusses how important it is for members of Rochester’s Black queer community to feel at home in the city’s queer spaces. As such, the organization is looking forward to helping rebuild Rochester’s vision of LGBTQIA+ pride in a way that favors coalition building over exclusionary practices.

“Historically, we [the Black queer community], have had to be careful,” says Anita. “A lot of Black and brown folks test the waters with a group before they fully commit. They must see if it’s worth it.”

As for the future? Anita remains hopeful that Rochester Black Pride will unite the community but by means that are accessible and comfortable for everyone.

“We want the Rochester community to come together for Pride, but we are not willing to compromise on making sure this is a safe space.”