Rochester recording artist Boy Jr. (aka Erica Lubman) is a singer-songwriter who doesn’t quite fit into one genre. Is she grunge pop, heavy pop, alternative? Maybe she is all of the above and more. One thing is for certain though, she is wildly and excitingly eclectic. Lubman released her second album, Pay Attention To Meeee, in June, and it does not disappoint. It’s a unique collection of emotions layered into intricate, melodic expressions, and there isn’t one dull moment on the entire album. While Lubman has been surrounded by music her entire life—both of her parents are music teachers—she got serious about composing and producing in high school and college.

“When I was younger my mom would always encourage me to put my feelings, frustrations, and worries into songs, poems,

or anything creative, and eventually I did,” Lubman says. “I have a really deep desire to try a lot of things and avoid pigeonholing myself or my creative ideas into one genre. And because I have the technology and experience at my disposal, I can incorporate numerous influences into one. But for many years, I’ve just wanted to be the Strokes.”

Pay Attention To Meeee is centered around explorative production. However, the theme didn’t fully come together until after each song was written. To put it simply, it’s a collection of thoughts, complaints, and expressions from the years 2018 to 2021.

“I didn’t write the songs with the intention of writing an album; it was a lot of stuff that I started at one point, left on the back burner, and came back to when I had more to say,” Lubman says. “A lot of it is

about various elements of obsessiveness, attachment styles, and abandonment fears. A lot of what I was doing was lamenting my feelings, but it winds up coming out through the lens of making something fun. I sort of hand it off with the concept of ‘I just want everyone to pay attention to me.’” 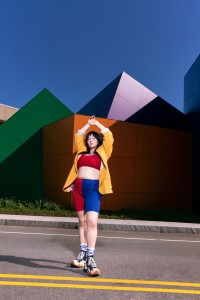 The oldest track on the album was written in 2018—Lubman’s senior year of college—and started out as an assignment to write a list song. “Smart Man” allowed Lubman to dive into the production process and steered her in a direction of sound she wanted to continue experimenting with.“Meet Me In The Middle” was written in 2021 and is the last completed song on the album. Lubman is the sole producer of every song on the album and created them in her home studio.

“For a lot of these songs I started out by creating instrumentals,” Lubman says. “I gave myself little assignments and then put some melodic and lyrical ideas to them. ‘Smart Man’ is the one exception, since I was tasked to write lyrics first, and then there are a couple others such as ‘Ur Lovable’ that came about from just sitting down and writing on guitar first and then turning it into a track. I’ll try to incorporate real-life samples and make the sounds organic when I can. ‘Drop at 1:01,’ one of the tracks on my last album, I made a snare sample of me slapping my own butt. Stuff like that where I can be (pun intended) cheeky with the use of electronics and audio I have a lot of fun with.”

As for personal favorites on the album, Lubman’s top picks have changed a few times. She was super excited for the release of “Narcissist Baby,” because she aimed to write a poppy song with weirder sounds while still incorporating alternative, off-kilter production. “Meet Me In The Middle” is another single Lubman was proud of the moment she finished it. She really wanted people to enjoy the song, and it holds a special place in her heart because of the way listeners took interest in it.

Lubman’s also extremely active on Tik-Tok and other social media. She likes to create her own short covers of songs or create little sections of songs for others to listen to. This way she can sit down, create, and complete a project that’s maybe only fifteen seconds long instead of taking months to complete an entire track.

“It’s been really enjoyable and good for letting myself see things to completion,” Lubman says. “I can sing about my cats or social anxiety or cover different artists’ styles. It’s been a good outlet for learning and trial and error, as well as a self-teaching experience that’s made me love and understand production a lot better than I did a few years before.” 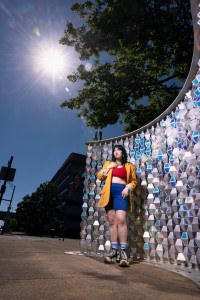 Lubman has an EP of commissioned tracks for Warner Chappell Music she created with a producer for their sync music library. The project is slated to be released on streaming platforms this fall. Boy Jr. can be found on Spotify, Apple Music, Instagram @boyjrofficial, TikTok @boyjr.69, and Twitter @BoyJrMusic. Information on upcoming gigs and new releases can be found on these socials.