Greenovation is dedicated to keeping junk out of the landfill

At first glance, Rochester Greenovation Inc., is easily mistaken for a mere secondhand retailer—which it is, among many, many other things.

The nonprofit organization is home to a mammoth collection of preloved consumer goods ranging from books, pianos, jewelry, furniture, art, pallets, speakers, cables, jackets, boots, ancient soda cans, coffee makers, lighting fixtures, and anything else you could possibly imagine with an ounce of cosmetic or functional value.

Wall to wall, room to room, the space— run entirely by volunteers—is crowded with material in the most charming way. Footpaths guide you into the particularly dense, untamed nooks, while wider paths are lined with creatively organized and aesthetically pleasing objects of all sizes. Cheery murals greet you at the entrance of Greenovation’s new location, at 850 Saint Paul Street, where it reopened in mid-August.

When your eyes grow weary of processing all the stuff, Greenovation’s real purpose starts to make a genuine impact.

“We keep things out of the landfill,” says Kimberly DePrez, executive director of Greenovation since 2014. This mission is the epitome of the organization’s efforts since day one. Originally launched in 2011 by Jay Rowe, Greenovation has been an ambitious project to curb the accumulation of material waste via education, resources, a host of collaborative efforts with local nonprofits, artists, and volunteer leadership.The second-hand store itself is only one vessel for this extensive mission.

“We have a lot of artists upcycle goods,” says the director. DePrez points to a small coffee table, feet from where we stand. She explains that the glass and bamboo furnishing was once an ottoman to a papasan chair, retrofitted with a piece of circular-cut glass by a volunteer to make a small table. “See, that’s very simple,” she says. “But you have to have the right tools and skill set to make it work. One thing we [at Greenovation] envision is for us to share that kind of multigenerational, multibackground knowledge with people.”

The kind of knowledge DePrez speaks of is the ability to use tradesmanship, craftiness, and resourcefulness—whichever you prefer to call it—to upcycle, reuse, repair, or reimagine secondhand goods to prevent material waste. Sharing that knowledge is what the “Greeno family” hopes to present to Rochesterians in the future through educational lectures they host in the space. She explains how widely applicable and important this education is. A cheap vacuum unit, for example, will break down several times over in a consumer’s lifetime. If you are unequipped to repair these throw-away appliances (they often only require a cheap fix, like a new belt), you may take one to the trash time and again, contributing to the landfill every so often.

If you don’t make a lot of money, you’ll also be stuck buying that same inferior unit, doomed to fail, time and again. See the problem? The free classes will help people keep viable goods from going in the trash, escape an impoverishing cycle of consumption, and learn a skill set of tool-wielding and MacGyvering that keep waste to a minimum.

“We have other nonprofits that work with us that we donate to,” she says. “They get to sell items though here, and we trade amongst ourselves as well. It’s a very nice collaboration to have.”

It’s also necessary. She notes that nonprofit organizations are often set in competition with one another for already scarce resources. “When it gets into times of economic distress, it gets even more difficult, so we were trying to build something of a safety net for these organizations.You can get something here that in a store might cost you three, four, or ten times more.” Keeping Our Promise Rochester, one of Greenovation’s nonprofit partners, aids in the resettlement of Afghans displaced by the United States military evacuation. Its goal is to help people make it to the States safely after helping the military to give them a head start. In this collaboration, Greenovation benefits from the Afghan volunteers who are skilled engineers, interpreters, tradespeople, and more. Keeping Our Promise has the benefit of using repaired computers, monitors, and a physical space at Greenovation.

The new Greenovation location took nearly five months to move into. This is, in part, the fault of a ginormous library of goods and is also the fault of the very, very old building they moved into.

“We do have an excessive amount of leaks in this building.” The building was once a Hikok brothers men’s leather accessory factory, and the leaks recently kept the organization’s doors closed to the public for about a month. The roof has a sawtooth design, where there are diagonal valleys and vertical peaks throughout.The day I visited, just about every valley was suffering from leaks.

Despite the setbacks, a network of volunteers and the community made the initial move possible. It is also not lost on the Greeno family that the building was preloved as well. 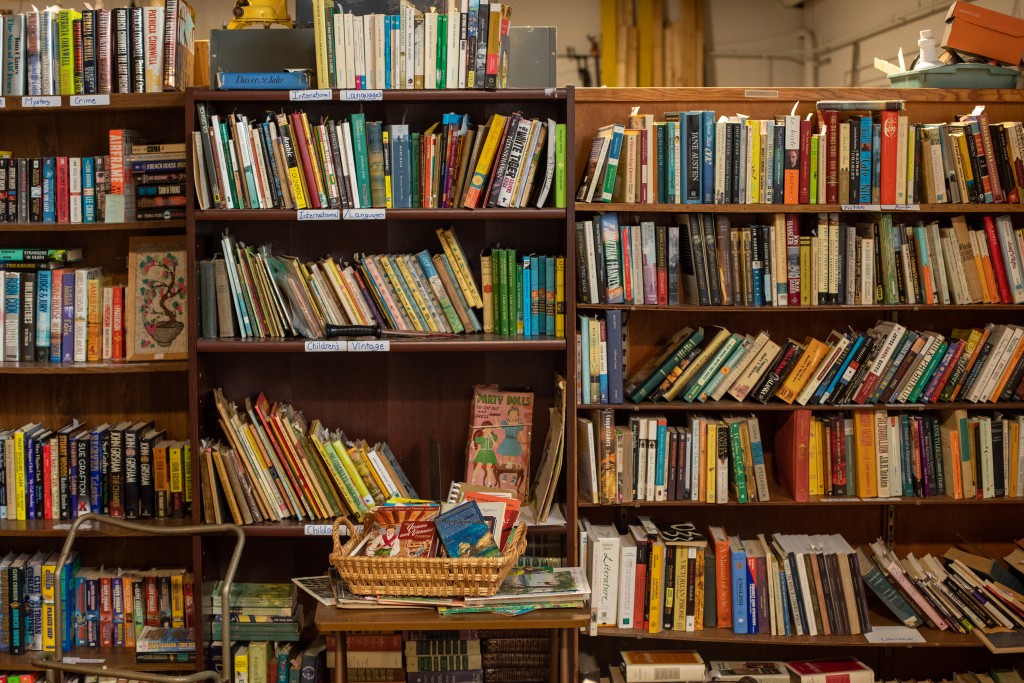 “Some things weren’t actualized at the other place, but since this was a fresh start, I was like, ‘Yes, we could do this!’ So, we built a big freakin’ stage that has access to the whole place, instead of being blocked off,” says DePrez. The location is also complete with a larger workshop than the last one. It is equipped with a bandsaw, chop saws, and more tools for more projects.

DePrez seeks to showcase community artists in a small room in the middle of the space.

“We had started doing something like this in our old location—it was called the Repertory there. This is our little version of that room. We have so many artists with Greenovation, and they are responsible for painting all these walls,” DePrez says, happily gesturing to the murals.

What strikes me more than anything was what DePrez had to say about the impact that preloved objects can have on people. Compelling stories of volunteers crying joyfully at the sight of age-old childhood toys, artists having run-ins with their old work, and the history of a building that is pre-loved being a sanctuary are all part of Greenovation’s mission.

The multiuse space is home to an army of unique community members. Ranks of skilled volunteers include Tom, a “jewelry man” who fixes and tests donated watches, necklaces, and more; Gordon, who can tinker and test older generations of computer monitors and tech for Greenovation’s partner organizations; Jim, who built the stage, DePrez’s father, a woodworker; a host of electricians who fix lamps; musicians who tune pianos; and much more.

“We have tasks available for everyone and anyone! If you have a smartphone, you can look up prices for us, if you love to organize, there’s tons to organize, if you specifically want to fix something or paint something, do it!” Visit Greenovation at 850 Saint Paul Street in Rochester and on the web at greenovationnfp.com.