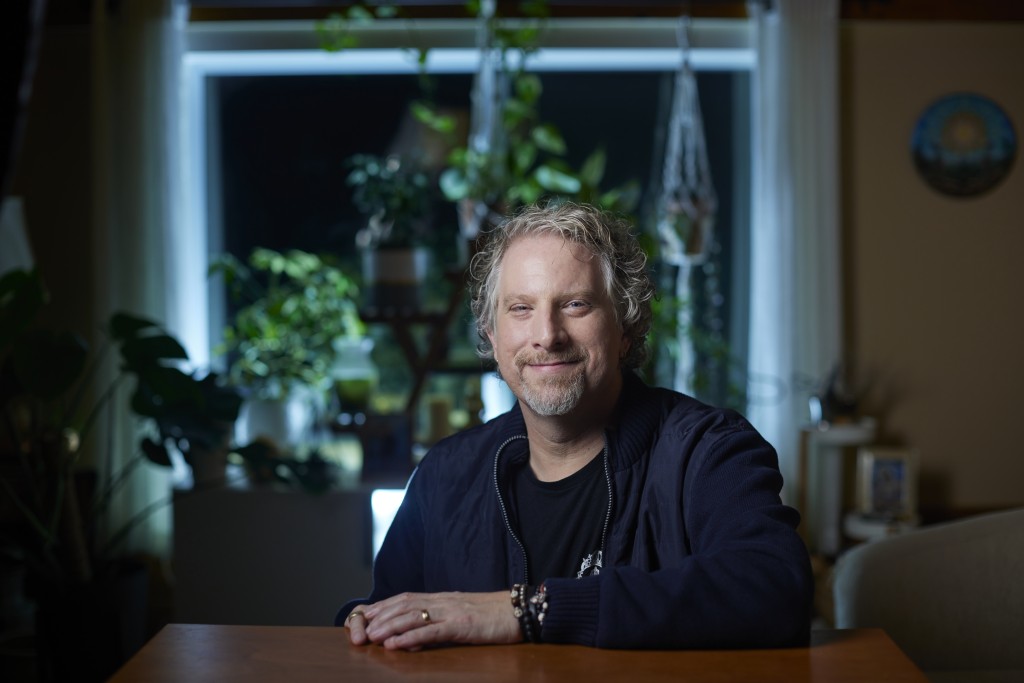 Like many people during the early days of COVID-19 lockdown, author Peter Conners found himself at a loss of what to do with his sudden free time. “I’ve gotten so into the habit of having an idea, developing it, and then working with my agent to sell it,” he says, referring to his previous nonfiction work. “At a certain point, I was figuring out what to do next. And my wife very wisely said to me, ‘Just start writing, and don’t worry about publishing.’”

The result is the release of two new books this spring: Merch Table Blues, his first published novel, and Beyond the Edge of Suffering, a volume of poetry. Over the course of a quarter-century, Conners’s résumé has encompassed several chapbooks, three volumes of poetry, a novella, and four works of nonfiction. “I have always looked at myself as someone who builds things with words.”

Conners grew up in Pittsford and, as a student at Pittsford Sutherland High School in the 1980s, he got into the Grateful Dead in a big way. He saw his first show just before their only mainstream hit, “A Touch of Grey,” in 1987, and began following the band on tour soon thereafter, supporting himself by selling t-shirts, stickers, and the occasional illicit substance.

“Sort of a little here and there to get to the next show.” After high school, he enrolled at what is now Ashland University in Ohio but felt out of place on the conservative college campus, so he dropped out to follow the band full time.

“That’s all that was really on my mind,” he recalls. Eventually, he found a better fit socially and academically at SUNY Potsdam, where there were plenty of Deadheads to attend shows with, and where he graduated with a BA in English in 1992.

While studying writing at Potsdam, he got into writers who influenced the Dead, specifically Beat writers Jack Kerouac and Allen Ginsberg. Following graduation, he continued writing poetry and novels (which he likens to putting in his 10,000 hours), and checking books out of the library—specifically classical writers like Dostoevsky—while working other jobs and traveling. During a visit to a friend at Stanford Law School in California, he spent time perusing Allen Ginsberg’s archives. Later, he matriculated at Naropa Institute’s Jack Kerouac School of Disembodied Poetics in hopes of achieving an MFA but, despite getting As in all of his classes, he dropped out. “I actually found that I was doing a lot less writing and reading in the program than I had been doing on my own,” he recalls. Deciding that he wanted to become an English teacher, he enrolled in Nazareth College’s education program.

It was at Nazareth where he found a mentor, Dale Davis, founder of the New York State Literary Center. Conners did part of his student teaching through NYSLC, and it was Davis who steered him toward being a writer-in-residence, which would become Conners’s bread and butter for a period after graduating. During this time, Conners published two volumes of poetry, started his own press, published broadsides with the Memorial Art Gallery, and taught at places like Writers & Books and Rochester Institute of Technology. He eventually found his way into a position as marketing director of BOA Editions. “I think they just saw the way that I was hustling, and that was what they needed,” he says of his hiring. The timing was perfect: his second child was born just three days before he started the job.

The hard work finally paid off in 2009 when he published Growing Up Dead, which details his coming of age following the Grateful Dead. “I decided to tell my story because I know how important this story is to so many people, and nobody’s published a book about it.” This was followed by another nonfiction book, The White Hand Society, which documented the decades-long friendship between Allen Ginsberg and Timothy Leary.

“They’d been through a lot together, and they were sort of survivors of the front lines of this really intense cultural battle,” says Conners. White Hand Society was inspired by Conners’s poring over of Allen Ginsberg’s archives, and published by City Lights Publishers, most famous for publishing Ginsberg’s legendary Howl. White Hand Society was followed up by an oral history of the jam band scene, JAMerica. By the time of Jerry Garcia’s death in 1995, Conners had already moved onto other jam bands inspired by the Dead, such as Blues Traveler, Phish, and Widespread Panic. “There wasn’t any real history of that scene emerging. I wanted to do it in a way that the voices of those people were front and center, as opposed to be doing the interpreting.”

He was approached by Cornell University Press to write Cornell 77, which was published in 2017 to honor the fortieth anniversary of the legendary May 8, 1977, concert at Cornell’s Barton Hall, which is considered to be the Citizen Kane of Grateful Dead concerts. The project was initiated by the publisher, a Deadhead himself, and, despite his résumé, Conners still had to be convinced.

“It was kind of intimidating. How do you write a whole book about a single concert? Then I thought more about it, and the exact thing that was off-putting to me became a creative challenge I wanted to tackle.”

Cornell 77 documents not only the concert but also the events at Cornell that led up to it. He reached out to and interviewed his friends in the Deadhead community, including Neurotribes author Steve Silberman, to write and finish the book. It’s also included in Get Shown the Light, a Grateful Dead box set of live recordings from the May 1977 tour.

With the publication of Merch Table Blues, he can now add novelist to his résumé. In addition, he also has a new volume of poetry. Beyond the Edge of Suffering, coming out in April, is Conners’s third book published with the Buffalo-based White Pine Press. The collection features new, lockdown-inspired poems as well as some previously unpublished poems that connect with the theme of his new work. According to Conners, publisher Dennis Maloney “really loves prose poetry, he’s supported that form over the years, and he likes what I do.”

Merch Table Blues was first conceived twenty years ago, and Conners finished it during the pandemic. It’s had several iterations, including one as a young adult novel. “I’ve written other novels and put them in the drawer, but this one would not let me go,” he recalls. Set in Burlington,Vermont, and other cities on the East Coast, Merch tells the story of a cult band that’s also a cult, told from the perspective of the band’s roadie, and it will be published in May.

Having a full-time job and raising four children (now grown) made research more daunting, but Conners found a way to carve out time. Over the years, Conners conducted his research and writing during swim lessons, soccer practices, in parking lots, at night, and on weekends. He’s still employed at BOA Editions, where he now serves as executive editor and publisher. He recently drafted another novel, a prequel to Merch Table Blues, largely set in Utica, which documents the development of the cult told from a third-person perspective. “I wanted to investigate who this cult leader is, where the cult came from, and how the cult developed,” he says. Beyond that, he’ll play things by ear. Says Conners: “I’m somebody who likes to see what hasn’t been done and approach something in a new way.”