In the last five years, the number of municipalities offering some form of composting has grown by nearly two-thirds, according to a 2019 report from the US Public Interest Research Group. The City of Rochester is one such municipality, and two years ago it conducted a study to determine the feasibility of reducing solid waste disposal costs. One of the participants in that study was Impact Earth, located in Brighton near the Henrietta town line. Since 2014, Impact Earth has performed composting services for concerts and other events, schools, municipalities, and private residences. The compost company owns and operates stores at the City of Rochester’s Public Market and Eastview Mall and is currently conducting pop-ups at the newly opened Mercantile on Main. In January, Impact Earth became the sole residential composting service in Monroe County after it bought its chief competitor, Community Composting. Presently, it serves around 3,000 customers. “A lot of times, waste doesn’t end up where it’s supposed to. That was a problem we solved,” says Impact Earth’s founder and CEO, Robert Putney.

For Putney, zero-waste has always been a way of life, but he took a detour along the way. Growing up in Gowanda, Erie County, he would spend weekends with his mother working at his grandparents’ ninety-acre farm, which is where he first learned to compost. After earning a history degree from SUNY Fredonia, he moved to Rochester and spent the better part of the next two decades working in the packaging industry. As he entered his forties, however, Putney had a revelation. “My years in packaging had opened my eyes to waste,” he recalls, and he rededicated himself to the environmental services industry. “I wanted the second half of my career to be dedicated to fixing some of the problems [the packaging industry] created. For me, that meant ultimately focusing on environmental waste and food education.” 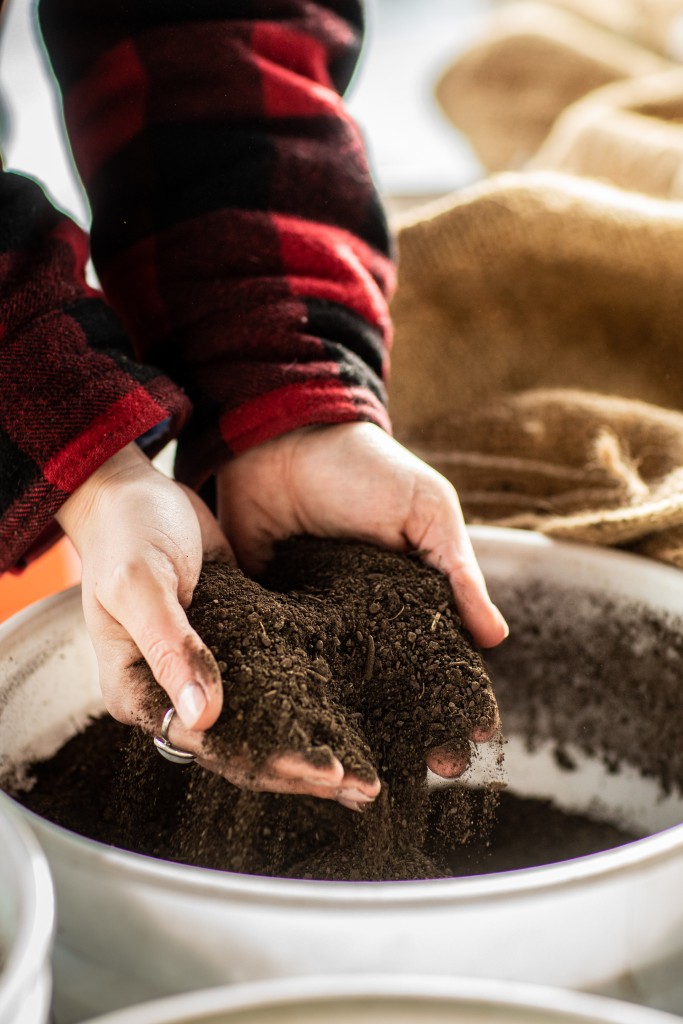 Following a year of writing grants for an Albany-based company, Putney founded Impact Earth in 2014. Initially focused on consulting, it soon grew to offer event composting after an intern from Rochester Institute of Technology returned from the Bonnaroo Festival in Tennessee. “He talked about this company called Clean Vibe that was doing some really cool stuff with regard to landfill-bound materials,” Putney reminisces. “We just called up a bunch of event coordinators in Rochester and said, ‘Hey, if we offered you guys a service where we sorted all your trash and it costs the same or less than a dumpster and what goes into that, would you be interested?’ Surprisingly, sixty to seventy percent of the people we talked to wanted to take a meeting.” Their first gig was an event in Ithaca in the summer of 2014. The following summer, they did sixty-five events, and the year after, 300. By 2018, Impact Earth was doing composting for the Constellation Brands-Marvin Sands Performing Arts Center (CMAC) in Canandaigua.

In 2016, Impact Earth began providing educational programs to schools when it launched a program with the Brighton Central School District. Brighton has a sustainability committee where Putney and his wife, Elizabeth, have served (Putney currently has four children enrolled in the district). When the topic of food waste education came up at one meeting, Putney offered Impact Earth to step in. “The Brighton School District took a huge chance and risk to try … we were literally teaching kids at their lunchtime about food waste,” says Putney. Since then, Impact Earth has conducted a compost education in the Hilton School District as well as the Kendall School District in Orleans County, Marcus Whitman in Ontario County, and the Harley School, among other public and private schools. Impact Earth’s reach stretches to municipalities as well: staff has overseen services and projects in the cities of Rochester, Corning, and Geneva, and the town of Victor; they’re also working on Canandaigua’s Climate Smart program through 2022. But it was out of the educational program that Impact Earth’s commercial collection business grew. 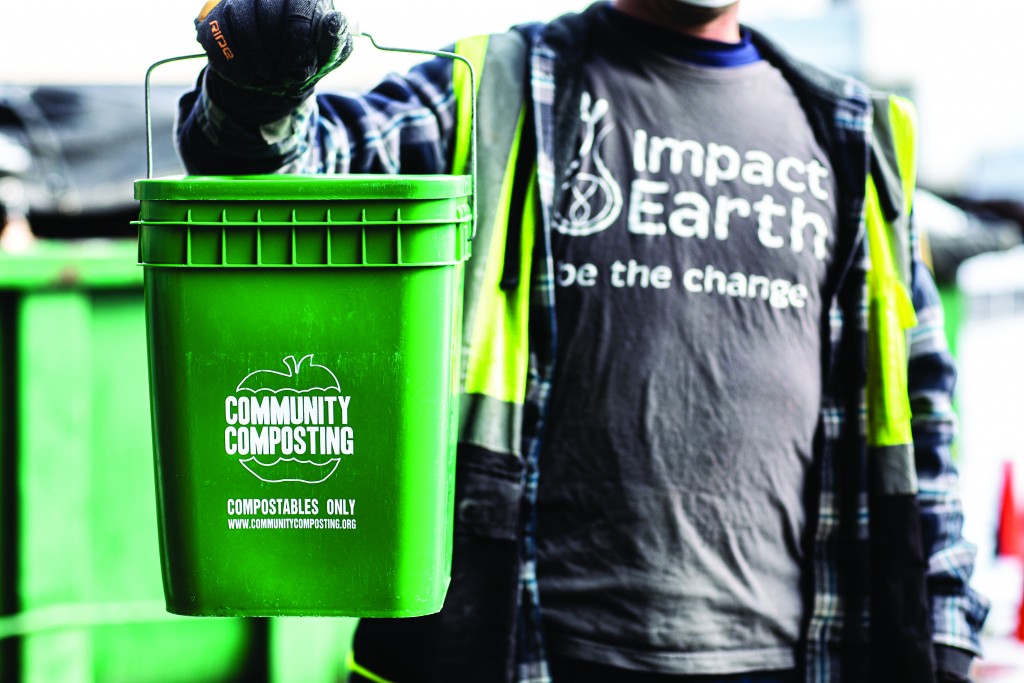 Impact Earth has drivers that travel to customers’ residencies, pick up the waste, and leave a clean bucket. After the route has been completed, they aggregate the waste at the headquarters in Henrietta, then move it to farms in Ontario County, which do what Putney calls the “heavy lifting” and create the compost. Twice a year, customers get their compost returned to them to use as they please. “They get it twice a year in five-gallon buckets. It’s super nutrient-rich and great stuff,” says Putney. Last fall saw the expansion of this component when Impact Earth acquired Community Composting. The latter decided to sell when its owners, Brent and Jess Arnold, got overwhelmed with their other venture of designing software for composting companies. “It was difficult to divide my time between the two companies,” says Brent. “Impact Earth was always our top choice to take over because of our previous relationship and the fact that they are local. There were a few other composting companies that were interested, but Impact Earth was the first to make an offer, which we immediately accepted.” According to Putney, Community Composting’s six employees were all offered jobs at Impact Earth, and most of them accepted: “They brought a ton of experience themselves that we really appreciate.”

With increasing interest from consumers for environmentally friendly and sustainable products, Impact Earth has added retail to its roster of services. After doing several pop-ups with the Rochester Public Market, Impact Earth became a full-time vendor in 2019. The Public Market shop grew from their relationship with Flower City Pickers, an organization devoted to redistributing landfill-bound food to people in need. Then, late last year, Impact Earth was invited to do a pop-up at Eastview Mall. “The mall wanted us to do something for the holidays,” Putney states. “It started out as, ‘Hey, let’s go try the mall and see what kind of response we get,’ and we got an overwhelmingly positive response. People were hoping we’d stay after the holidays.” As the holidays ended, they struck a deal with Wilmorite, shut down the store for two weeks, redesigned the space, and made a launch for a permanent store on January 16. Impact Earth’s retail stores offer reusable household items such as beeswax wraps, produce bags, and facial and dish cloths, as well as compostable versions of dental floss and sponges.

On Valentine’s Day, Impact Earth conducted a pop-up at Mercantile on Main and will be conducting more holiday pop-ups throughout the year. Ultimately, Putney hopes to open another retail location there, saying that “[the] Mercantile would probably be a good fit for us.” Other current and future projects include a partnership with Zero Waste Chicago, which is run by a former Rochester resident and customer of Impact Earth and offers similar services in the Chicagoland area. They have a formalized partnership, and Impact Earth owns a minority share in the company. “We met with them and decided to help them grow that business utilizing our background,” states Putney. “We have a hand in what goes on there, but they have their own group of folks that run the day-to-day operations.” 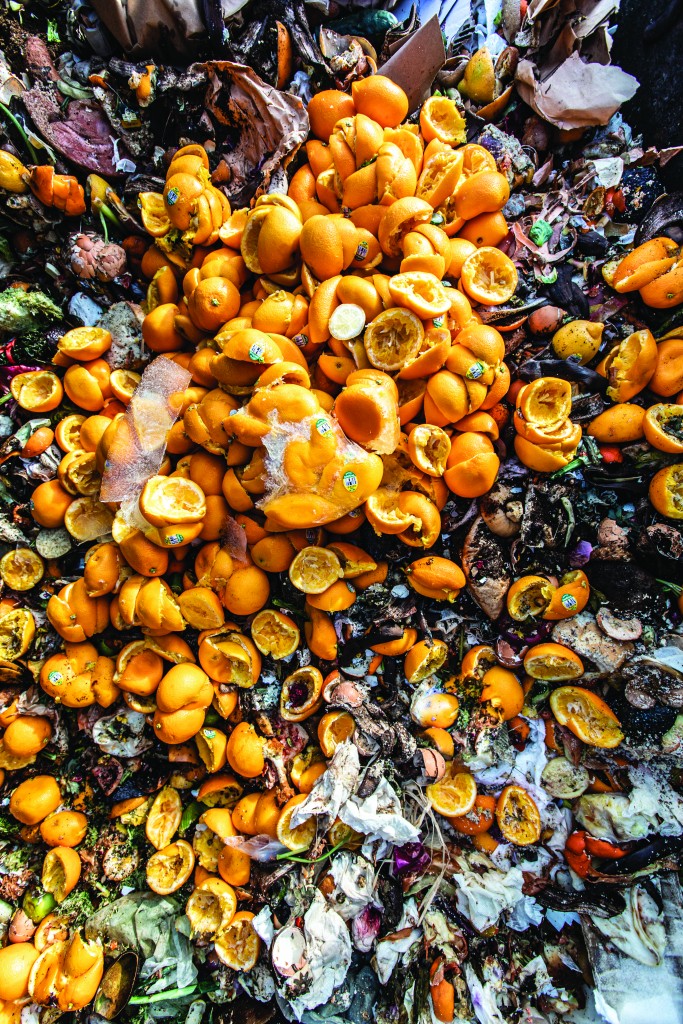 Another major goal for 2021 is to expand their residential composting into surrounding counties, like Wayne and Genesee counties. They also hope to expand further into Ontario County. “Building that structure and logistics is going to be a big undertaking and will probably dominate the year for us,” he says. There are also projects with programs like the Walden Project at Cummings Nature Center in Naples and the Genesee Country Village & Museum in Mumford. Putney hopes to partner with forestry schools down the road and plans to continue to find new and palatable ways to expand the zero-waste concept: “We started out actually as a consulting company. We were working with event coordinators, and helping them figure out how not to throw all of their waste to the landfill. And so that’s sort of where we started, and we still do perform those services today.”

For more information, go to impactearthroc.com or visit retail locations at the City of Rochester Public Market and Eastview Mall in Victor.