Making a Seat at the table

Two foodies take their love for local eats from the internet to paperback; photo by Tomas Flint 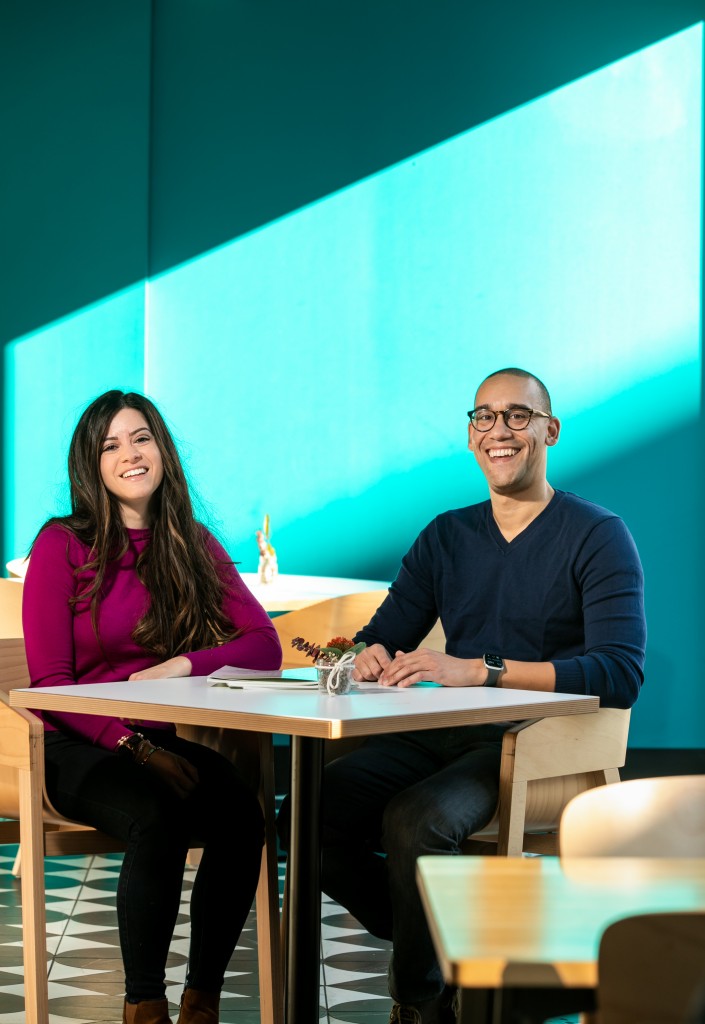 Casey Bowker will be the first to admit it: While he loves to cook, he’s not a trained culinarian. So, when a friend suggested that he write a cookbook, he wasn’t sure where to start or if he could even finish such a project.

Then it hit him. Instead of scrambling for a pen and a piece of paper to collect his thoughts, Bowker grabbed his phone, quickly shooting a text to Stephanie Hanna, hoping that she’d become a partner on the project.

Hanna, the founder of Sip and Savour Rochester and a food photographer, replied instantly: “Yes.”

“Stef and I have worked together well in the past,” says Bowker, who is the host and creator of ROConnoisseur, a food and beverage web series. “I knew I wanted to collaborate with someone with a similar work ethic and passion for local food like I did.”

The two are not only veterans of the Rochester food scene as individuals, they’re also champions for its culinary community. So, working together made perfect sense. Bowker’s initial idea for the book was to gather a collection of recipes and stories from a diverse group of Rochester area chefs, baristas, and bartenders who represent a mix of established and newer places around town. The end product would become A Seat at the Table, a two-volume cookbook featuring fifteen recipes in the first installment and another twenty recipes in the second.

“We wanted to be able to reach a wide audience and understand that everyone has different tastes and diets,” Hanna says.

For that reason, Hanna and Bowker selected a vigorous variety of recipes, including vegan and vegetarian dishes alongside meat options as well as desserts, cocktails, and mocktails.

When it came to pulling together a project of this scale, they knew it was important to divide up the responsibilities. Bowker did the writing and editing with some assistance from his mom. And Hanna arranged, took, and edited all of the photos. They also knew they needed some help with design, so Rebecca Loren handled those details. Every aspect of the book is local, including the printing—Visit Rochester even signed on as a sponsor. “Everyone featured in these books has a great personality and story,” Hanna says. “We hope that the community feels more closely connected with them.”

A passion for food

Food has this amazing ability to bring us together. The way friends and family gather at a table while sharing dishes and stories is what motivates Bowker and Hanna. Growing up in a large Greek and Macedonian family, Hanna says she was always surrounded by great food. She recalls how her grandmothers would make huge Sunday lunches after church.

“[I] helped them in the kitchen, and it inspired me in the kitchen and as an adult,” Hanna says. “I wanted to be able to share my passion for food and the community as well as foster new memories surrounding food, travel, and now, family.”

Bowker’s grandmother, who was a full-time cook at a hospital, inspired him as well.

“We were pretty poor growing up, so my grandma knew how to stretch a dollar in the kitchen,” Bowker says. “She taught me how to cook, and I’d always look to her for advice when I lived on my own and had to make my own meals.”

They both feel comfortable in the kitchen and wanted to make sure that their cookbook provided recipes that were not only easy to follow but required only basic skills.

“We wanted to make sure that the recipes wouldn’t be too involved so that most people could recreate these recipes at home,” Bowker says.

“We want to encourage people to experiment in the kitchen,” Hanna adds. “Recipes are a guideline, and you’ll find tips along the way that the chefs, baristas, and bartenders have given to foster that.” And they know from firsthand experience that includes tasting and trying the recipes in their own kitchens.

“I’ve made a handful of the recipes at home. It was a bit of a personal challenge to myself and my family to see which ones I could make at home and have them turn out edible,” says Bowker with a laugh.

Hanna was able to taste many of the dishes while taking photos and was excited to begin cooking at home as well.

“I’ve cooked a few of the recipes, including one of my favorite French recipes [francese alla giuseppe] from Joe Gianvecchio at Sapori Catering,” Hanna says. “I love that Chef Greg’s recipe from Flour [bucatini all’ amatriciana] is so simple yet so flavorful. This is one of his all-time favorite recipes, and I can see why.”

And if they were planning a dinner party with recipes from the cookbook’s second installment and had to cook some of the dishes for their guests, they both say the only thing that would make sense is a buffet style tasting menu, with bits and bites of everything to show the variety of dishes they’ve featured.

“If I had to plan a one-night menu though, I would choose Voula’s tzatziki as an appetizer, then have Shaina’s apple cranberry salad with Simply Crepes’ double whammy fried chicken sammy,” Hanna says.

“I really have enjoyed everything we’ve featured, but given that most of my family is vegetarian, I’d likely feature focaccia from Tree Town,” Bowker says. “While you can certainly add meat to the dish, I think it’s one of those recipes that everyone you invite would enjoy.”

Though A Seat at the Table is a beautiful showcase of delicious dishes from local eateries, there’s one thing that makes the project even sweeter: a portion of the sales goes to the C.U.R.E. Kids Cancer Association of Rochester.

“Stef and I have both been affected by what cancer can do to a family,” Bowker says.

“I know families that have utilized the support of C.U.R.E., those who volunteered with the nonprofit, and we recognize the efforts of the amazing people who work there,” Hanna says. “It is necessary to support those that can have such an impact on the health, financial needs, and well-being of others.”

To think, what turned into quite the passion project for them both while also contributing to a great cause started with a simple text message.

“I’m so thankful that Casey reached out to me,” Hanna says. “We have a great working relationship that has made collaborating on the cookbooks a breeze,” Bowker adds.