“Let’s go blow up some stumps”

OSB Ciderworks keeps it in the family

An unassuming building off Big Tree Road in Lakeville across from the waters of Conesus Lake holds a surprising treasure. Original Stump Blower Ciderworks, or OSB as it is fondly referred to, is a five-year-old cidery operated by Elise Barnard and her brother, Eric Smith. Your first introduction to the establishment is a heavily bumper-stickered door,  which immediately creates a sense of community. This theme continues as you enter the tasting room, with the presence of an all-encompassing family that is a mainstay of this enterprise made up of locals and visitors, regulars and newcomers. It is this reason, along with some incredible libations, why OSB Ciderworks should be a part of your next beverage journey.

The name Original Stump Blower comes from a familial story about Smith and Barnard’s father and their great-uncle. In an effort to hide their homemade hard cider from Aunt Bobby, they would store their concoction in stumps, and the phrase “let’s go blow up some stumps” became code for a boozy backyard visit. Not to mention that the cider was deemed so strong it was said it could blow up stumps. Taking up the hobby, the siblings decided to create OSB’s “The Original,” which has an eleven percent ABV, is barrel aged in Black Button Distilling whiskey barrels, and is, you guessed it, the original family recipe. They began sharing it, opening the cidery in 2016 and gaining a following soon after concocting more than forty different ciders. Two of their most popular flavors to date include Cherry Cherry Why Ya Buggin, a smooth yet crisp marriage of apples and cherries, and Hold the Crust Apple Pie, a fall favorite filled with cinnamon and spicy goodness. For every OSB cider made, you can bet a witty, fun title will be attached. (Some of my favorites include Matcha Man Apple Savage and Honey Cham You Dig It.)

OSB has a reputation of being a welcoming locale that brings in new people all the time along with the never-ending roster of diehard OSB cider lovers. Barnard, Smith, and the other cider tenders want customers to feel as though they are being welcomed home, and as such present an unostentatious environment. It doesn’t matter who you are or where you come from, they want to welcome you into the community. As Barnard describes it, the community that makes up the patronage at OSB “… [is] like its own little family. We are welcoming and open, and people have integrated … [It is] so much more than just a customer relationship.” Barnard attributes this friendly environment to the way she and her brother grew up. As part of a very open family, the mentality has always been “there is room for everyone.” Taking that philosophy to heart, they operate their business the way they were raised, being a friend to everyone.

OSB is a true local watering hole, pressing New York apples as well as other local fruits and ingredients to ferment their distinctive flavors. At any given time, there are at least nine types—usually many more—of cider to try at their tasting room at the original Lakeville location. The taps are always changing, keeping the ciders seasonal and fresh. And if cider isn’t your thing, there are always a few local beers on tap as well. The pair’s second location in Buffalo at 517 Main Street offers sixteen ciders and four beers on tap. There are also around 200 restaurants and bars from Syracuse to Buffalo that have OSB cider available on their menus. 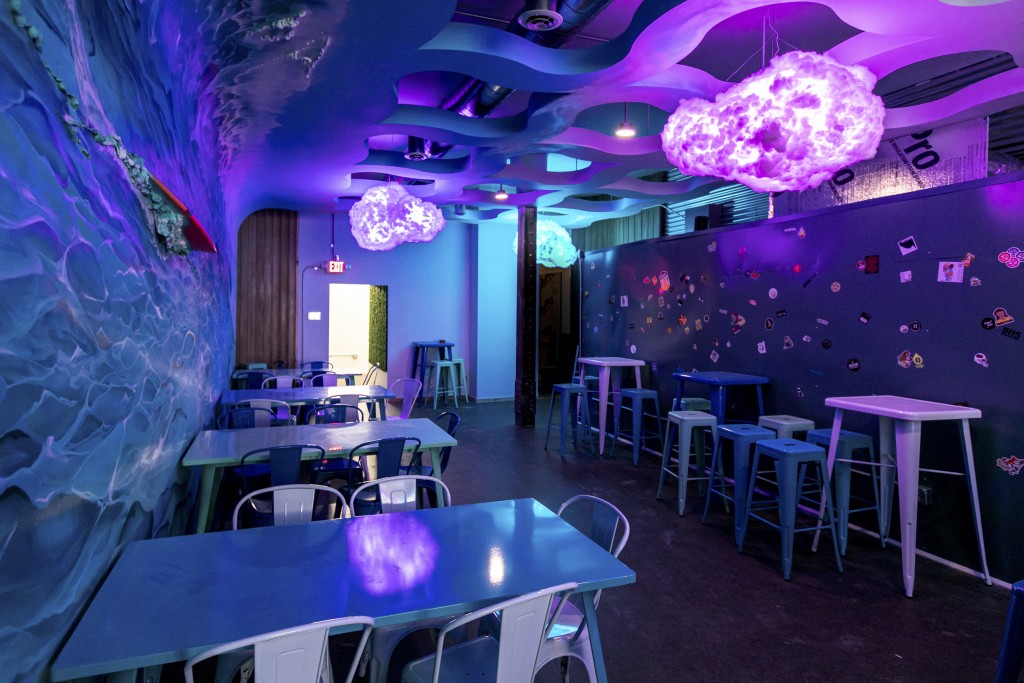 As with any small business, the pandemic has presented problems Smith and Barnard never thought they would have to overcome. It’s been a learning experience, with Barnard adding, “I’ve learned that business as usual is not a thing. You have to always be evolving.  Always be thinking of what’s next. You have to adapt and lean on those around you.”

As part of that necessary adaptation, they have begun offering tap-to-home cider deliveries. Their Instagram page, @osbciderworks, will let you know what county or town they will deliver to next, and you can order from their website, osbciderworks.com. The pair also haven’t let the pandemic slow down their growth. In addition to having a large, open indoor space at their Lakeville location, there is also outdoor seating, and they will break ground on a 2,000-square-foot expansion this spring, offering even more room. The Buffalo tap room location is also now officially open for business.

Barnard said it best: “We have an amazing group of people that work hard to make OSB rad. I’m grateful for the patrons who have become close friends. We would be nothing without them.”

To experience a fun and unique vibe, refreshing, great tasting cider, as well as some of the coolest people you will meet, a trip to OSB in either Lakeville or Buffalo should be your next destination.