Rush-Henrietta teacher inspires his classroom through positivity and bodybuilding

When you first meet Jimmy Buntley, you are charmed. Charmed not only by his striking looks and demeanor, but by his authenticity and the passion with which he speaks. Buntley is passionate about everything he does.

An educator in the Rush-Henrietta School District since 2018, Buntley works with students in grades ten to twelve. “It was an accident, really,” he says. A Henrietta native, he had worked in Rush-Henrietta’s town-run after-school program since 2010. When he came home from college in 2014, he continued working there. In 2017, the school district took over the program. “Then there was a job opening in the school district. I applied, and here I am.”

Buntley has a passion for learning and looks to his high school teachers as his inspirations. “I owe a lot to my teachers,” he says, “They were more than teachers. They were coaches, mentors, and role models who created long-lasting memories.”

He’s a graduate of the University at Buffalo where he majored in nutrition and science. But it is working with kids that has been his long-time passion.

He loves relearning and diving deep into some of the subjects that he enjoyed in high school. He is interested in how the brain changes over time. “What may have seemed boring to me when I was in school can be mind-blowing now.”  He shares in the successes of the students with whom he works—his favorite part of teaching is seeing them succeed.

Buntley considers himself a “master of none” (from the proverb “jack of all trades, master of none”) and his interests are varied. He enjoys theater (he’s been acting since he was a junior in high school), music, science, history, art, sports, comic books, and more.

He’s always learning and wants the students to be curious and ask questions. As a perpetual student himself, he wants kids to realize that it’s okay to enjoy learning and that it is a lifelong process. “I’m a geek—I love learning. And that’s cool. I’m a student forever.” He also wants his students to feel free to be their authentic selves.

Buntley’s school schedule also allows him to indulge in his other passion: bodybuilding.

Buntley is a professional bodybuilder and model. Although he began training in 2011, he considers 2014, the year he began competing, as his start in the field. It’s a tough arena, and it’s not just about looks and appearance; it’s also a lifestyle and dedication to training and nutrition. 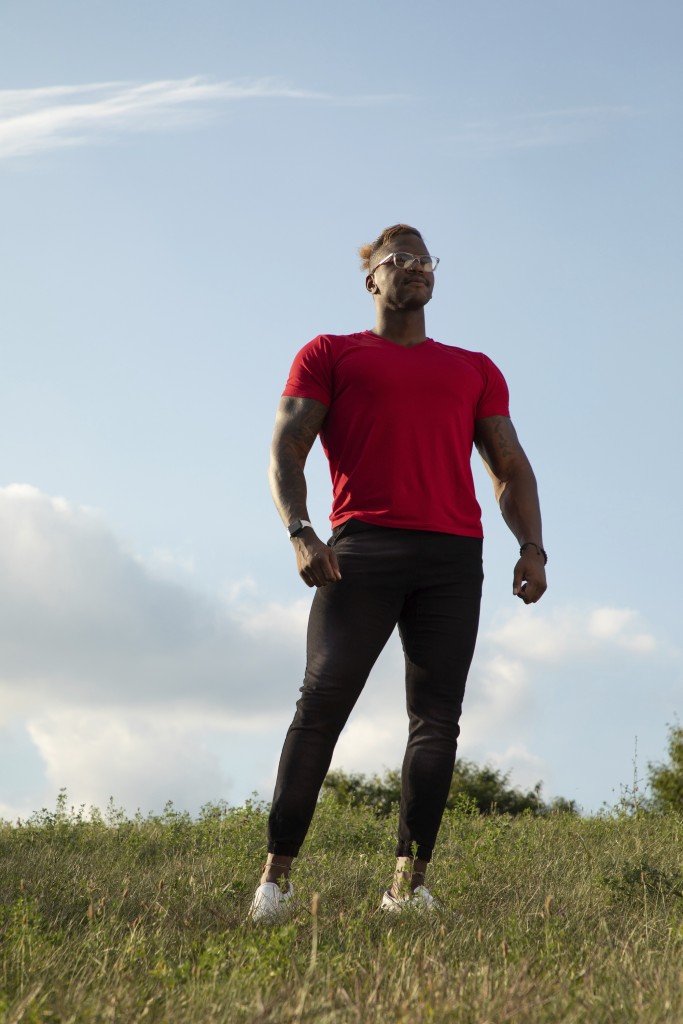 He has earned his World Natural Bodybuilding Federation (WNBF) pro card and is working on attaining his International Federation of Bodybuilding and Fitness (IFBB) pro card. Since 2018 he has trained at Samson’s Powerhouse. He ultimately would love to compete at the Olympia, the IFBB’s professional competition.

Not everything has come easy for Buntley. Bodybuilding at the competition level has its challenges. “When you are just starting, there are a lot of naysayers,” he says. “So much of bodybuilding is mental. You are dieting, your hormones change, and when naysayers say negative things, it really has an impact.”

To be a player in this field takes a strong will. Buntley is honest about the sacrifices that he has had to make to achieve his status. Physical and mental training and willpower have been the name of the game. His social life has suffered. Strict dieting has meant that it’s not easily possible to visit area eateries and bars. There are times when he would love nothing more than a juicy burger and fries. “It’s isolating to not be able to go out with friends and eat or drink,” says Buntley. “When you are training, you sacrifice for months on end.”

But Buntley looks on these things as motivation, and today he is at the top of his game.

He’s had numerous TV, film, and web series offers and was in a small indie film last year. He’s been a guest on podcasts in the US and Singapore talking about nutrition and juggling careers in education and fitness.

Buntley’s energy and enthusiasm for everything he does is infectious and rubs off on the students with whom he works. Obviously, they are interested in the bodybuilding area of his life. “They ask questions about food, diet, and working out.” But he relates to the students on multiple levels: “I am into so many things and can talk to my students about sports, art, music, anime, and more.”

His students also have the chance to see his goofy side. For Halloween and school character days he has been known to transform into Superman or Spiderman. He sees superheroes and comics as a metaphor for real life. “The principles that appear in these stories: good vs. evil, and kindness to your fellow man are relevant and can be put into practice in day-to-day life,” says Buntley.

He relates easily to his students. “I’m only ten years older than these kids. I remember what it was like to be a student.” He strives to help his students as best he can, by being genuine, flexible, listening, and giving attention to the kids who need it. “No one wants a phony teacher,” he says. “When students see that you want to be there, it changes everything.”

Buntley is enthusiastic about giving back to his community and has been involved with Rush-Henrietta’s summer camp for grades one through six for several years. He considers it his first love. When he was eighteen, his friend’s mother was the director of recreation for the town of Henrietta, and he spent a summer working on the program. He slowly moved up the ranks and in 2019 became director of one of the programs. Summer camp involved all sorts of activities, including weekly field trips and movie screenings. Due to the pandemic, this year’s program had to be canceled, which was a loss for both kids and counselors alike.

In whatever Jimmy Buntley does, he is himself. This creates a positive presence for him both in the classroom and on the bodybuilding stage. To his students he is “cool” and inspiring. As he says, “Being cool is being yourself and liking what you do proudly.”