After photographing weddings for eighteen years, Tomas Flint is convinced they are the great equalizer.

“My job as a photographer is to see people for exactly who they are. And weddings are an amazing way to experience people because there is no hierarchy,” he says. “People come together to the same place to experience the same emotions.” The Utica native and current resident of Irondequoit is also a staff photographer for (585) magazine.

“Ron Howard was just as nervous and excited about his son getting married as any other dad would be. He’s experiencing the same stuff. And I love that about weddings!” says Flint, whose portfolio also includes portrait, concert, sports, and editorial work. 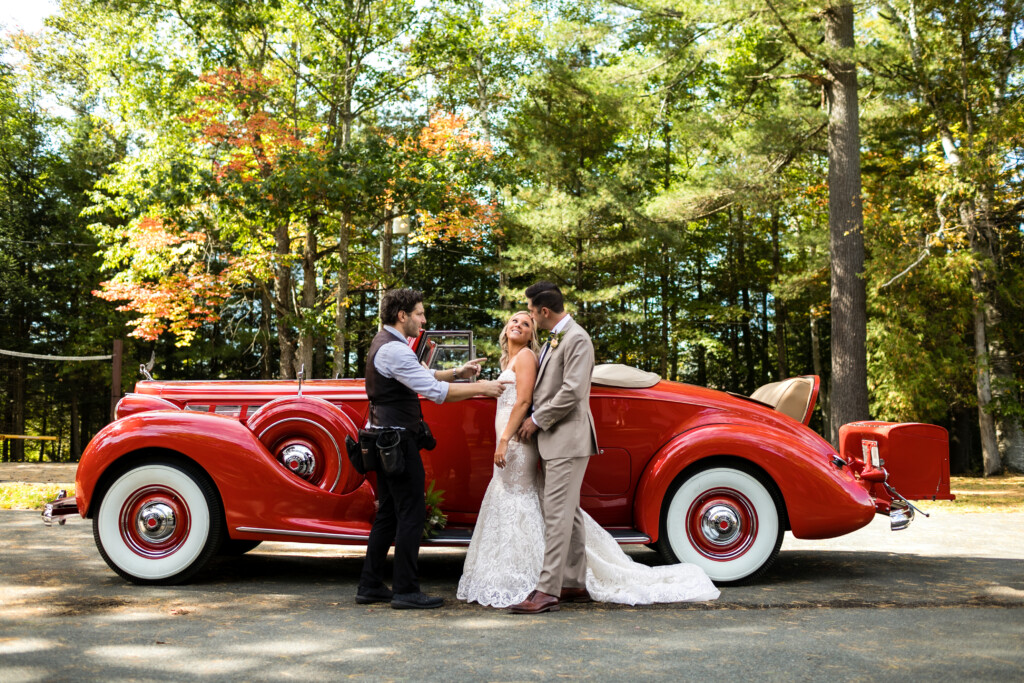 Turning a passion into a career

Tomas Flint was running a computer networking and IT outsourcing company on Park Avenue when he realized his true calling. Turning Stone Casino, a client of the company in the early 2000s, needed someone to manage its website—and take photographs for it. Flint, who had always taken photos with a film camera as a hobby, had the confidence to take on the job. He bought a digital camera and got started.

“Suddenly, I was being creative on top of managing a client, and it was perfect. Right in that instance was when I said, ‘This feels right to me,’” he explains.

Flint and his partner sold the IT business, which left him with some funds to pursue his passion. In the meantime, he returned to tending bars, as he had for years.“I started telling people at the bars that I take pictures,” he says with a chuckle.“Kind of one of those ‘fake it ’til you make it’ things.”

His love for photography goes back to his childhood home, where his father, a doctor, took up photography as a hobby. Flint had always played around with his father’s equipment, and his father taught him what he knew. But it never occurred to the younger Flint to take on a career in photography until Turning Stone came knocking.

There was no formal education in the art form, just a “baptism by fire,” which Flint credits as his secret weapon.

“I didn’t have the education by which I could hyper-analyze myself and feel the pressure of having to follow this through,” says the photographer, who did receive a bachelor’s degree in molecular biology.

“But eighteen years of weddings—eighteen years in the mouth of the lion—I don’t think there’s any school that could prepare you for that.”

Finding a niche in the wedding space once Flint decided on photography as a career, a friend of his began working weddings. Flint offered to help him out, and he immediately fell “head over heels.”

“I thought shooting weddings was the most challenging, rewarding thing you could possibly do. Go out there with real people on real days and take on 10,000 decisions in a single day—do it with class, grace, respect—and watch people’s history unfold, right in front of you,” says Flint with palpable passion.

“I thought, ‘I could definitely do this! But I really want to travel.’”

He started attending workshops all over the country, where he met peers who were involved in destination wedding photography. As a young man with a sense of wanderlust and no obligations tying him to any one place, there was major appeal in this subset of wedding photography.

And it stuck. For the next several years, Flint traveled the world and captured the happiest days of many people’s lives. He was doing work he knew was important. He was fulfilled in many ways.

The experience also provided him with more credibility. It opened up additional opportunities for him, and he won awards for his work. Flint was named a Destination Weddings & Honeymoons Magazine International Top 20 A-List Photographer.

After a handful of years traveling the world to photograph weddings, the industry began to shift. Technology was becoming more widely available, and resorts began hiring in-house photographers. At the same time, the work wasn’t always tangerine-hued sunsets for Flint.

“I didn’t really feel as excited about traveling. It’s not always as glamorous as it seems. You always have to be sure to have the appropriate permits, backups—what happens if something goes wrong? It was an emotionally taxing experience,” says Flint.

Once his son Maceo, now seven years old, was born, Flint had even more reason to keep his work local. He has continued his wedding photography business, but now focuses primarily on the Finger Lakes and Adirondack regions of New York.

As someone who has shot more than 250 weddings during his career, Flint has plenty of solid advice to lend readers who may be planning weddings of their own.

First, he says it’s important to align with vendors who are actually hearing and seeing you. Most couples shopping for wedding vendors are doing so for the first time. They could use guidance from experienced vendors who are willing to listen and acknowledge that no two couples are the same.

Vendors should inspire you and bring ideas to the table. It also makes sense to choose vendors who align with your virtues. You are entrusting them with one of the most important days of your life, after all.

Also, ask the questions to find out how well they act under pressure. Flint recommends keeping an eye out for someone who will do “extraordinary work when things don’t go as planned.” Essentially, what is their Plan B, Plan C, and so on?

Lastly, try to find vendors you click with. “Find someone who you would want to invite as a guest to your wedding,” Flint recommends.“Someone you could see as a friend. … Ideally, you’d want to give them a hug after the wedding and say, ‘Man, I’m so glad you were here.’”

Former professional ice hockey player Ryan Callahan and his wife Kyla clicked with Flint right away. By the time the couple met him, they had interviewed a few other photographers to take their engagement photos; most seemed uninterested during their meeting or just pushed a book of photos at them to thumb through.

But their meeting with Flint took place at Spot Coffee, and they spent three hours in conversation. The couple hired him for their engagement shoot, then their wedding, maternity shots, newborn photos, family photos, and later to photograph numerous events for their Ryan Callahan Foundation, which benefits pediatric cancer patients and their families.

“I learned having a soulful connection with your photographer, building trust, and establishing a relationship that would be meager to call a friendship, is the first step in choosing your photographer,” says Kyla Callahan.

“And Ryan and I always say our shoots with Tomas are like couples therapy, allowing us the time to reconnect as partners in our wild life.”

While most photographers aim for satisfied customers, Flint says his goal is to create ambassadors for his brand, ambassadors who are raging fans.

And with numerous clients like the Callahans, who have hired Flint to photograph nearly every major event in their lives, he seems to have done just that.