In a league of its own

On a sunny Sunday afternoon in February, members of the Junior League of Rochester are working on the Strawberry and Onion Salad recipe from their cookbook Applehood & Motherpie. Cookbook committee chair Stephanie Williams slices the romaine lettuce horizontally. After finishing, she calls out,“Who wants the task of chopping the onions?” Another member, Chelsea Wernick, volunteers, and Williams moves on to chopping the strawberries.Christina Leal, whose house it is, is making the poppyseed dressing that gives the salad its distinct flavor. When the salad is finished, it is served along with charcuterie and crab burgers, another recipe brought in by Arlene Vanderlinde, a sustaining member who had served as a tester during the making of the original cookbook. 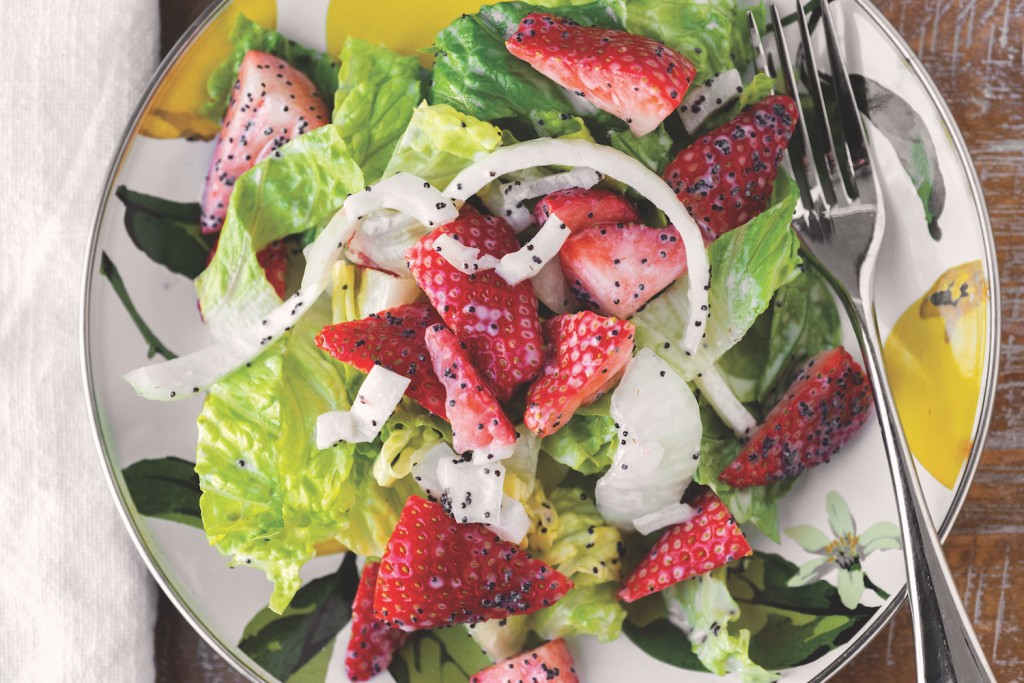 Growing up in Walworth, Williams took notice of the frequent appearance of Applehood & Motherpie in the kitchens of her friends’ parents. “I alwaysnoticed this cookbook, and I was like, ‘What is this cookbook?’” she recalls. “When I joined the Junior League, they mentioned that they were the publishers of Applehood & Motherpie, and I got really excited. It really piqued my interest from my background as a journalist, a lifestyle writer, and a food lover.” Since its publication nearly forty years ago, Applehood & Motherpie has sold copies in the six figures. Its unforgettable green and red cover has become an icon in kitchens throughout Western New York, and it is considered by many the crème de la crème of Junior League cookbooks. It has also been inducted into the Walter S. McIlhenny Hall of Fame, an honor reserved for community cookbooks that have sold more than 100,000 copies. As chair of the cookbooks committee, Williams—who had been drawn to the Junior League as  a foodie—organizes monthly gatherings devoted tomaking recipes from Applehood and its 1991 follow-up, For GoodnessTaste.“I want to get our membership more excited about our cookbooks so that everyone can accurately speak to the legacy, history, and special place in our culture that these cookbooks have.”

While cookbooks may play a significant role in the life of the Junior League of Rochester, it’s more than just a fan club for food lovers. Founded in 1901 byMary Harriman (sister of the late New York Governor W. Averell Harriman), the Junior League is a women-only organization encouraging volunteerism, andcommunity service and cultivating the professional development of women. Its membership of 150,000 spans 291 Leagues in four countries. Among its famous members are former first ladies Eleanor Roosevelt, Betty Ford, Nancy Reagan, and Barbara and Laura Bush; Supreme Court Justice Sandra Day O’Connor; and entertainment figures like Julia Child, Katharine Hepburn, and Shirley Temple Black.

The Rochester chapter was organized in 1933, and in the last decade, its membership has more than doubled from forty members to nearly 100. The JLR’s current ongoing endeavors include a diaper bank to provide diapers to needy families and fundraisers like the Battle of the Brunches, where local restaurants serve tastings of their best brunch items, and the new Craft Brewery Challenge, where one can buy a passport

that offers discounts from participating breweries. It has also teamed up with other Junior Leagues throughout the state in support of the Homeless Children and Youth Act (HYCA), a proposed New York State law to make housing for children and youth experiencing homelessness easier to access.

To join, one must be twenty-one years or older. Provisional members—as new members are called—must attend an orientation meeting, which the JLR holds three times a year, where the history of the JLR and its committees are discussed. Then the provisional member is required to complete a project and present it to the membership. Past provisional member projects have included conducting fundraisers and drives for the JLR’s diaper bank; creating dressing rooms, gym space, and a yoga wellness nightat Sojourner Home; assisting in the research and creation of a grant database; and creating a fitness program for girls at Gates- Chili High School. Following project completion, provisional members become full, active members, and are assigned to a committee chosen for them based on their interests. After seven years, they have the option to become “sustainingmembers”— meaning that they remain members but are no longer involved in the day-to-day operations.

It was the interest in having a long-term, permanent fundraiser that led the JLR to initiate what became Applehood & Motherpie in 1979. “At the time, it was a tried-and- true fundraiser,” says Vanderlinde, alluding to the success of Junior League cookbooks elsewhere, such as Charleston Receipts (Charleston, SC), Soupçon (Chicago), and San Francisco A La Carte (San Francisco). LuciaShaw, who had returned to the JLR after leaving to have two children, was brought on as the chair for the project by what was then known as the Ways & Means Committee. “Tori Butler, who was head of the Ways & Means Committee, said to me, ‘Okay! Time to get back in, and I have just the place for you!” 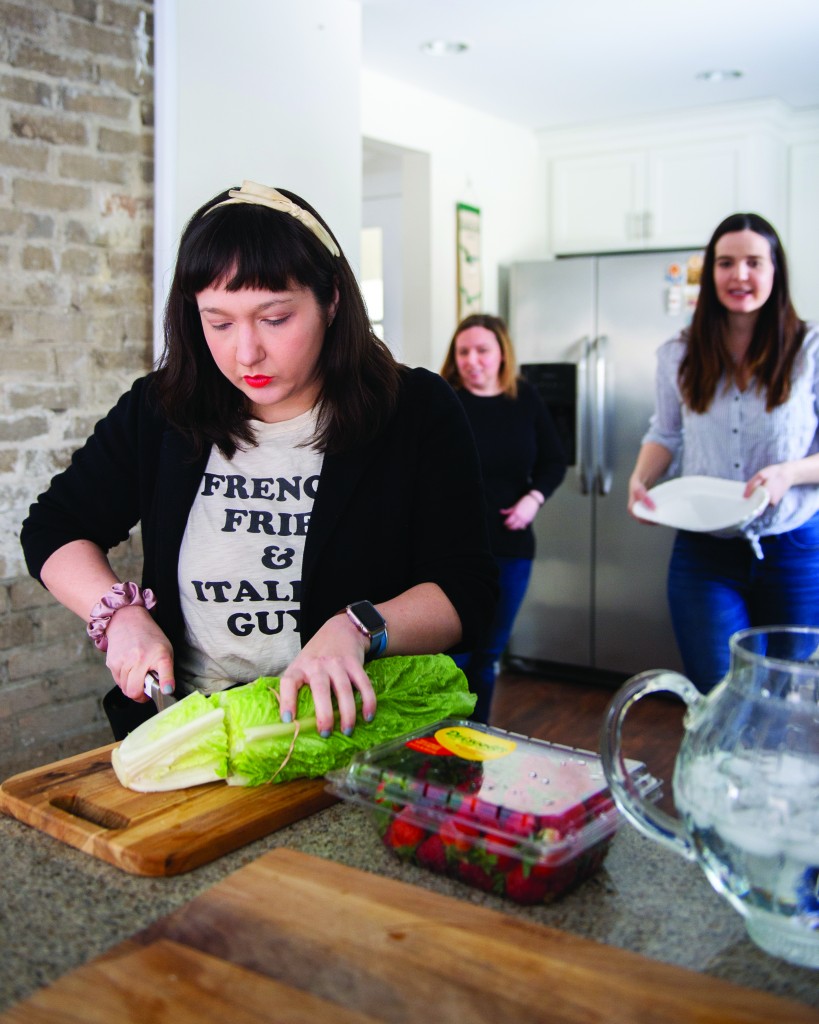 Shaw and Alice Smith, who was assigned the role of recipe chairperson, set about soliciting recipes from the community, and Shaw acknowledges that finding recipes was initially a challenge. “It was hard to talk people into submitting recipes. Unless they were Junior League members, they didn’t realize, even though they had been told, that we were planning on this going nationally.” The names of those who submitted the recipes wereremoved so that the testers couldn’t know the authors, and therecipes were rated on a scorecard. “We had a very strict tasting sheet that cooks had to fill out,” says Shaw. “They had to fill out information on the ease of preparation and the ease of finding the ingredients. Each recipe got a green slip of paper, and they had torate it.There were four categories: Excellent, Okay, Medicore, andForget It.” Evaluations where recipes that were rated badly because the tester disliked a particular ingredient were tossed out.According to Smith, recipes were tested at least three times withseveral testers. Some, like Shaw, wound up testing more than 100 recipes: “I tested 144, and I looked it, too!” Two thousand recipeswere submitted; ultimately, 555 recipes made the final cut.

Ingredients were taken in and out of recipes, and amounts were clarified for readers. “When a recipe called for cream sauce, we included amounts for that sauce as many do not know what proportions are needed for the sauce,” says Smith. In some cases, recipes were named by members: “I got to test the recipe that was called Apple Pinwheel, and I got to name it,” says Vanderlinde. “When I put the apples on the cake, it was in a form of a pinwheel. They let everybody openly contribute.” According to Shaw, they left out the usage of brand names for the sake of widening the appeal, andShaw believes that has contributed to the book’s longevity. “We chose not to put any preserved foods, no brand names. For example, Hellmann’s mayonnaiseis called Hellmann’s in the East, but it the West, it’s known as Best Foods.” Adds Smith: “We avoided brand names in order to add longevity to the life of the book. Brands come and go, and geographic areas do not carry all.”

Applehood & Motherpie is bound by its flexible three-ring binder, with the user being able to remove recipes with ease and allowed the book to propitself up, standing in contrast to the standard spiral binding of previous Junior League cookbooks. It was innovative at the time, and the idea came fromShaw’s husband, who had been given a similar binder while attending a business conference. “He had been to a conference, and they had those materialsthey gave attendees. It was not a cookbook; it was a notebook and it stood up.” He came home and demonstrated the binder to Shaw. “He said, ‘Everthought of doing this?’This was before the stand-up, Plexiglass holder.”

Then there’s the infamous title. It’s not uncommon for Junior League cookbooks to highlight facets of their region. There’s Tea-Time at the Masters (Augusta, GA), A Taste of Aloha (Honolulu), and Jambalaya (New Orleans). According to Vanderlinde, the apple theme was decided early on because “this area is apple country and home to so many different varieties” and the name Applehood & Motherpie was a malapropism that came entirely by accident. “Gayle Medill was the president of the League at the time. We were sitting in a room, brainstorming names for the cookbook,” remembers Vanderlinde. “I remember sitting in a chair, and she came up to me and said, ‘How about Applehood and Motherpie?’ What she meant to say was Motherhood and Apple Pie, and it came out backward. Everyone looked at each other and said, ‘Oh my God, that’s perfect!’”

Applehood & Motherpie  was  published in March 1981, and it took off quickly. Subsequently, the JLR released a limited edition of Applehood with an additional tab’s worth of recipes. By 1984, the book was available in all fifty states and was sold through mail-order catalogs like Talbots and Jessica’s Biscuit. That year, the book sold its 100,000th copy when a Farmington woman bought Applehood at Lock, Stock, and Barrel at Eastview Mall as a birthday gift for her mother. A party was held in October to commemorate the occasion and honored that customer. Seven years later, the JLR followed up Applehood with For Goodness Taste. Unlike Applehood, the recipes in For Goodness Taste were not named or subheaded. Nor were Vanderlinde, Smith, and Shaw (who’d stepped away from active membership after Applehood’s publication) involved in the cookbook’s making. Its Martha Stewart–style “entertaining” and gourmet themes were in step with other Junior League cookbooks of that time period, such as Los Angeles’s Gourmet LA. “I love the recipes in it, but it’s a whole different format,” says Shaw.

The most recent printing of Applehood was in 2011 and may very well be the final edition available in print, according to Williams. From that point, theJLR will continue to publish it as an e-book.“We are hoping that the last 4,000 copies or so will be placed in the hands of a new generation of at-home cooks,” says Williams. “I can’t say anything for certain, because we haven’t reached the threshold of running out of inventory.” In the meantime, Applehood & Motherpiewill celebrate its 40th anniversary next year. According to Williams, there are plans for a celebration. “There is definitely something in the works. All I have to say is wait and see.”

Erin Scherer wrote about Boundary Breaks in the March/April issue. She has a copy of Applehood & Motherpie at home in Geneva.