The effort to rebuild the Children’s Pavilion

Highland Park is Rochester’s best-known green space and garden, thanks to the Lilac Festival. What most don’t realize is that the park’s original centerpiece, its crowning feature, is missing. But it may be coming back.

That vanished attraction was the Children’s Pavilion. In fact, celebrated landscape architect Frederick Law Olmstead designed Highland Park around the Children’s Pavilion, which stood just to the east of the reservoir, at the highest point in the park. Sixty-two feet in diameter and forty-six feet high, with three levels, the circular, open-air structure dominated the skyline. It offered breathtaking views north over the city to Lake Ontario and south as far as the Bristol Hills and Conesus Lake.

The Children’s Pavilion was the central attraction of Highland Park when it opened to the public in 1890. Over the decades, in addition to being a three-story playground for kids, the pavilion was the site of concerts, birthday parties, and weddings, and was a convenient place for groups to meet, for example to tour the park.

As the years passed, the Children’s Pavilion fell into disrepair and was demolished in 1963. The Highland Park Conservancy has been working to bring it back. 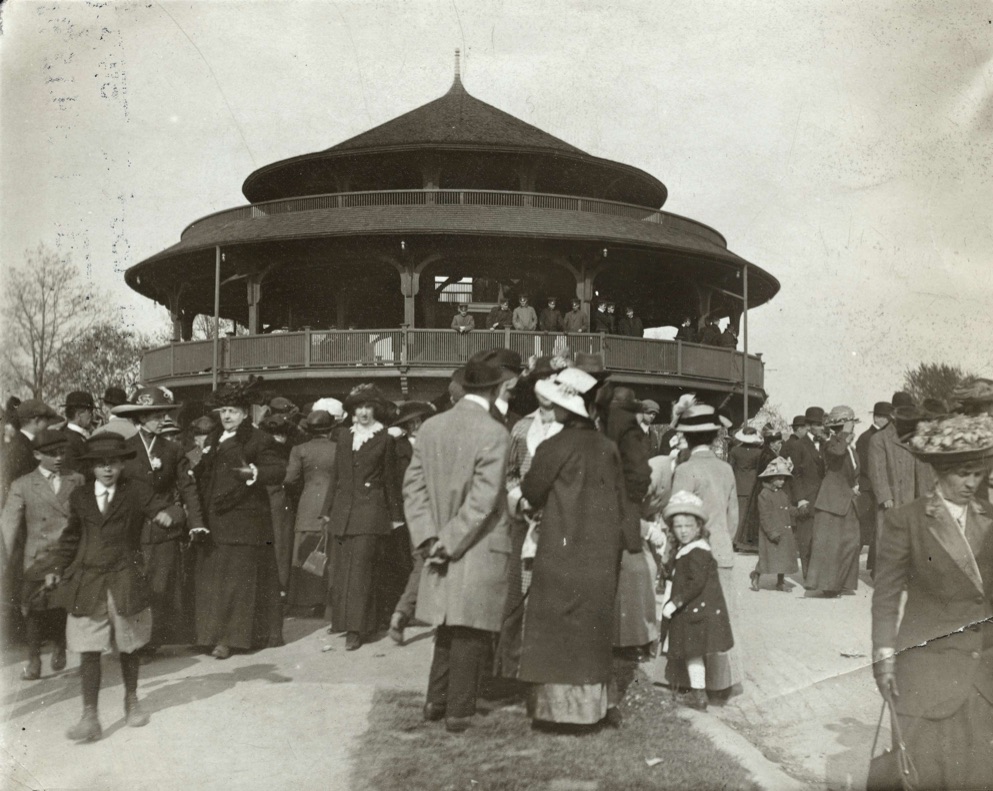 “The pavilion was the first thing that was built—before the Pinetum was planted, before the lilacs,” says JoAnn Beck, president of the Highland Park Conservancy board of directors.

“If you put your finger on the pavilion on the original plan, you can see that it’s the endpoint of all of these drives and walks. Everything goes to the pavilion, the high point, the experience where you get the overview of the park.”

The mission of the Highland Park Conservancy, as stated on its website, “is to advocate for, and participate in, the preservation, restoration, and enhancement of the entire Highland Park with its world-class arboretum, its historic Olmsted design and its other amenities, by increasing the public’s appreciation for, and active engagement with, its absolute uniqueness.” Since 2002, a focus of that work has been on raising the funds needed to rebuild the Children’s Pavilion in its original form and on its original site.

“We won’t recreate the pavilion exactly,” says Beck.“It will have the same scale and style as the original, but it’s going to have an elevator, and it will be accessible to all. It is going to be visible on the skyline, and it’s going to be a monument to health and to the future.”

Health, accessibility, the future—these are goals in keeping with the original design of Highland Park in general and the Children’s Pavilion in particular. Olmsted conceived of parks as fostering robust health and calm in the midst of teeming urban environments.

In the late nineteenth century, Rochester was growing increasingly industrial and dirty. The system of parks designed by Olmsted of which Highland was the first—it would include Genesee Valley, Seneca, and Maplewood—was intended to offer, according to the National Association for Olmsted Parks, “accessible green space that restores and nurtures the body and spirit of all people, regardless of their economic circumstances.”

In that democratizing spirit of looking to a brighter, more healthful future for all, the pavilion was dedicated to the children of Rochester when it was opened to the public on Monday, September 29, 1890. According to the following day’s Democrat and Chronicle, more than 10,000 Rochesterians showed up for the dedication, including thousands of children. So important was the event that all city schools, public and parochial, were closed for the afternoon to allow youngsters to attend.

“It was children’s day and no mistake,” reported the Democrat and Chronicle.

Among the speakers that day was Edward Mott Moore, noted physician and president of the Rochester Park Commission. He praised the builders for having “erected for the special use of those who are the hope of the future, the children who dwell in our beautiful city, this charming little temple of Hygeia [Greek goddess of health], hoping that the splendor of the scene may attract them to its hills and valleys, where the breezes are freed from the malaria of city sewers or the swampy exhalations of lower levels.”

A notion of how Rochester’s children once enjoyed the pavilion comes from a September 29, 1935, article in the Democrat and Chronicle, “Playing Pirates in Park Pavilion as Much Fun to Children As It Was to Parents:

“A generation of children of Rochester’s South Side, who in their youth played buccaneer, pirate, and adventurer up and down the fascinating flight of stairs and around the curving sides of the pavilion, has grown up and watched its own children play there. Then as now a favorite sport was sailing the ‘great big towership,’ into which vivid childish imaginations transform the pavilion, across stormy seas in search of an island of buried treasure…”

One member of the conservancy board, Jim Cullen, recalls coming to the pavilion as a boy in the 1950s and 1960s. His grandparents owned a home near Highland Park, and his family would spend Sundays there.

“My grandmother used to get my father to take us over here to blow off a little steam before dinner. So, we used to play in the Highland Bowl and climb on the artillery and look in the windows of the conservatory.And we could climb on the pavilion, which we thought was cool because it was like a picnic pavilion in Genesee Valley Park except it was three stories high.”

“There were wooden rails all the way around,” says Cullen. “In a way you felt like you were on somebody’s elevated porch. Maybe the most fun thing was just running up and down the stairs and being kids.”

Cullen was nine years old when the pavilion was razed.

“That summer or spring it was barricaded. So, we came up here and played—that must have been 1963—we came up and we couldn’t climb on it. And we came up again later, and it was gone.”

For nearly twenty years the Highland Park Conservancy has been working to raise the funds needed to rebuild the “little temple of Hygeia.”

The Monroe County Parks Department aims to approach the Planning Board and the Legislature to have the project added to the county’s 2022 capital budget.

The year 2022 is no arbitrary target. It marks the bicentennial of Frederick Law Olmsted’s birth, a fitting time to bring back the Children’s Pavilion to Highland Park.

Jim Cullen foresees a structure that looks the same as the original but is more durable. “We have far superior materials,” he says, “and methods that are far superior. I’m hoping what we build here will last a couple hundred years or more.”