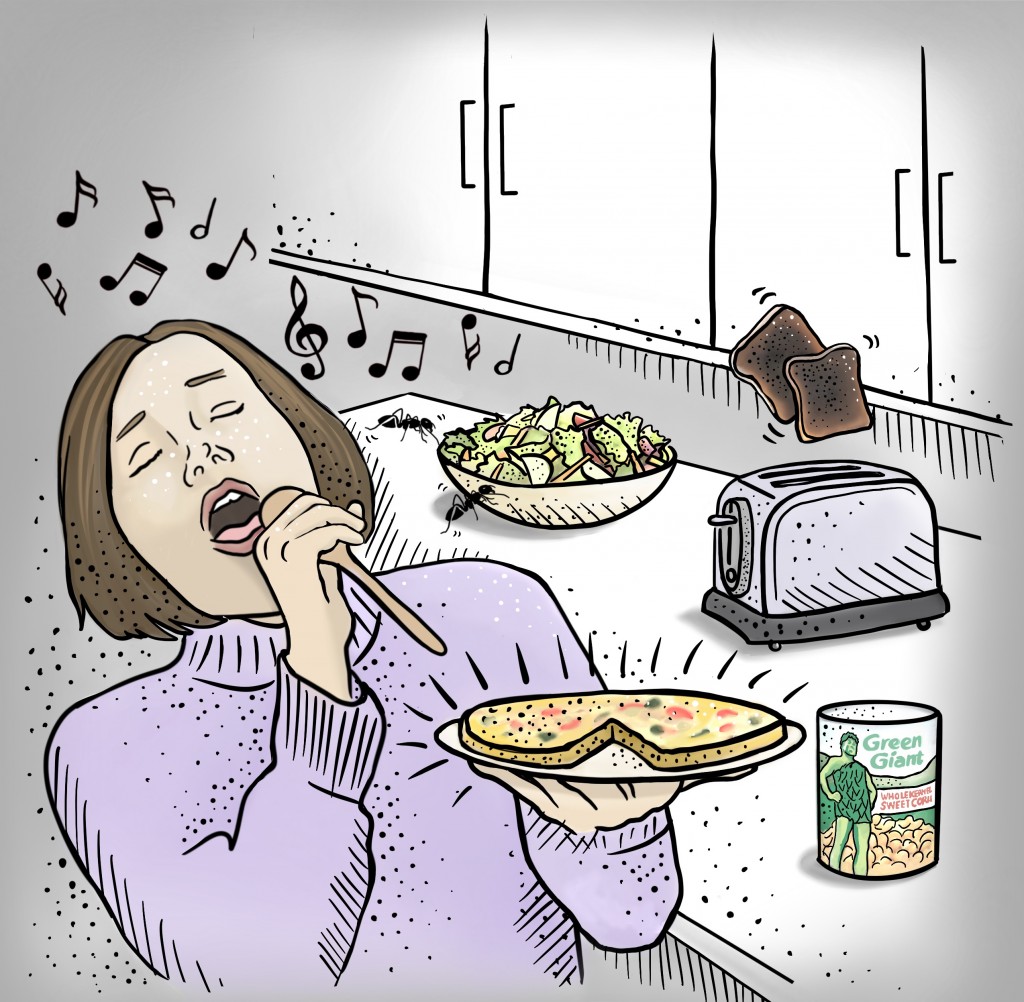 I find that understanding people really lies in the art of decoding. By nature, people never overtly state their personality traits, but the way they act tells you everything you need to know about them. Apply this theory to my mom’s busy kitchen and the family’s reactions to her many stellar recipes; you’ll learn not just about my mom, the chef, but about the differing styles of the food critics she tries so hard to please.

There’s me—the oldest child and most natural diplomat. They call me The Thinker; I’m always analyzing and asking questions. “Why are there mushrooms in this? Who in the hell eats fungus on purpose?” Or, when served a questionable quinoa dish—it doesn’t look or taste like anything I’d eat outside of prison walls—I scrunched my face up with disgust and asked “What is this garbage? Bewilderment Salad?” And the name stuck.

My reputation as an introspective and precocious skeptic reared its alarming head at the age of three. One night as we ate corn, I took a few hesitant bites and then demanded some answers. “Is this Green Giant corn? I only like Green Giant, you know.” My mom assured me it was and to just eat it and shut up. I did so grudgingly, but as soon as dinner is through, I left the table, headed to the garbage can and rifled through the trash until I found the empty freezer bag the corn came in. In a fit of hysterics, I marched to the table and shrieked, “THIS ISN’T GREEN GIANT! THIS IS BIRDS EYE! I TOLD YOU IT WASN’T GREEN GIANT.”

It was a betrayal from which I have never recovered.

My sister, a self-proclaimed diva, takes the Broadway approach. Everything is a song to her. One morning, Mom decided to make a frittata with her pasta leftovers. For the next twenty minutes, our family endured a full overture, complete with jazz hands and a semitrained alto voice cranked up to nuclear volumes, as my sister ran in circles singing “HAKUNA FRITTATA!” There were zero calls for an encore, but the name stuck.

The year Will.I.Am had a hit with the lyrics “You can go hard/Or you can go home,” our sister walked around on Thanksgiving Day admonishing all our guests that “You can have hash/Or you can go home.” Much to their own regret, I’m sure, no one chose to leave.

As an extension of her divaliciousness, my sister is in love with not just her own voice but also her own jokes. Her favorite style of joking is puns. One day, she helped organize my mom’s dishes and silver. The serving dishes took on a life of their own. We’re talking Leaning Tower of Pisa status. My sister took one look at the ceramic Jenga pile that was set before her and lambasted my mother: “You have a serious platter control problem.” She then laughed about her own joke for a solid forty seven minutes. She ran from room to room to inform everyone of how damn clever she was, and then she drove to the mall, the gas station, and the Russian Space Station to make sure word of her comedic genius spread to infinity beyond.

(I’ll spare you the details of the time she went shopping for new kitchen chairs and came home with a solid thirty-minute set about “stool samples.”)

My brother deals in no-nonsense declarations. He revealed this trait at a young age when he was handed a linguini salad. He took one look at the black spices that pepper the dish and announced that he would like my mother to “come get these ants out of my salad.” Voila! “Ant Salad.” My mom has a delicious rice bake recipe that is a family favorite. Not a family favorite is the lady who gifted us the recipe. My brother is never afraid to call these things out. “That lady was a straight up bitch.” Thus, the genesis of “Bitch Rice.” My mom also has a great recipe for baked beans with a cornbread topping. Though delectable, the dish wreaks havoc on our gastrointestinal situation. When this came to light, my brother called it “Crap Your Pants Casserole,” and a star was born.

Once my brother had a friend over, and Mom begged him to come out of his comfort zone and try her patented roasted vegetables. “All I’m asking is for you to try it once, and if you don’t like it, at least you know. I made all my kids try everything at least once.” My brother retorted plainly, “That’s how we all became addicted to meth.”

Now my dad, on the other hand, is the opposite of a food critic. He hates seeing food go to waste and will eat literally anything. He’s the human embodiment of “there are starving children in the world.” My mom could accidentally deep fry a lampshade, and he’d volunteer to eat it as soon as he hears it’s headed for the trash. “I’ll eat that; I just hate to see food go to waste.” I’ll ruin toast so badly that the butter dish ends up with third degree burns, and my dad simply shrugs and says, “Scrape off the burnt part; that toast is still good.”

And at the center of it all is my mom. Forget Gordon Ramsey in Hell’s Kitchen. This is master chef Big Mags and she reigns over Lunatics Lounge. Her motto is “Eat It and Shut Up,” and her menu boasts Hakuna Frittata, Bewilderment Salad, and Crap Your Pants Casserole.

On the banks of the scenic Erie Canal