David and Meagan D’Allesandro are proof that if you are patient, detail-oriented, and willing to strike when an opportunity presents itself, you can live out your dreams through a satisfying career.

The couple enjoys drinking fine craft beers, whether out with their friends or together at home. So, it was only natural that, one day after visiting a local home brew shop, David decided to start brewing his own beer.

Never one to half-heartedly jump into a venture, it wasn’t long before David became “obsessed” with the beer-making process. He was always on the lookout for the latest and greatest equipment for his home brews and researching cutting-edge ways to take his beers to the next level while constantly searching for his next batch of beer.

With a strong entrepreneurial background and a vast familiarity with the service industry (Meagan had served at a popular restaurant in Rochester while David was a server and a bartender at an equally popular establishment), the two would constantly pitch potential business ideas to each other. They both hoped to identify a creative and satisfying outlet for their professional dreams while securing a realistic way to make a living.

Little did the two know that their dreams were well on their way to realization from the moment David brewed that first batch of beer. After producing beer weekly for one year, David says he and Meagan realized their days of searching for a creative business opportunity were over. “[With beer brewing], we had found an idea that would stick, with enough passion behind it to make it worth the hard work,” says David. 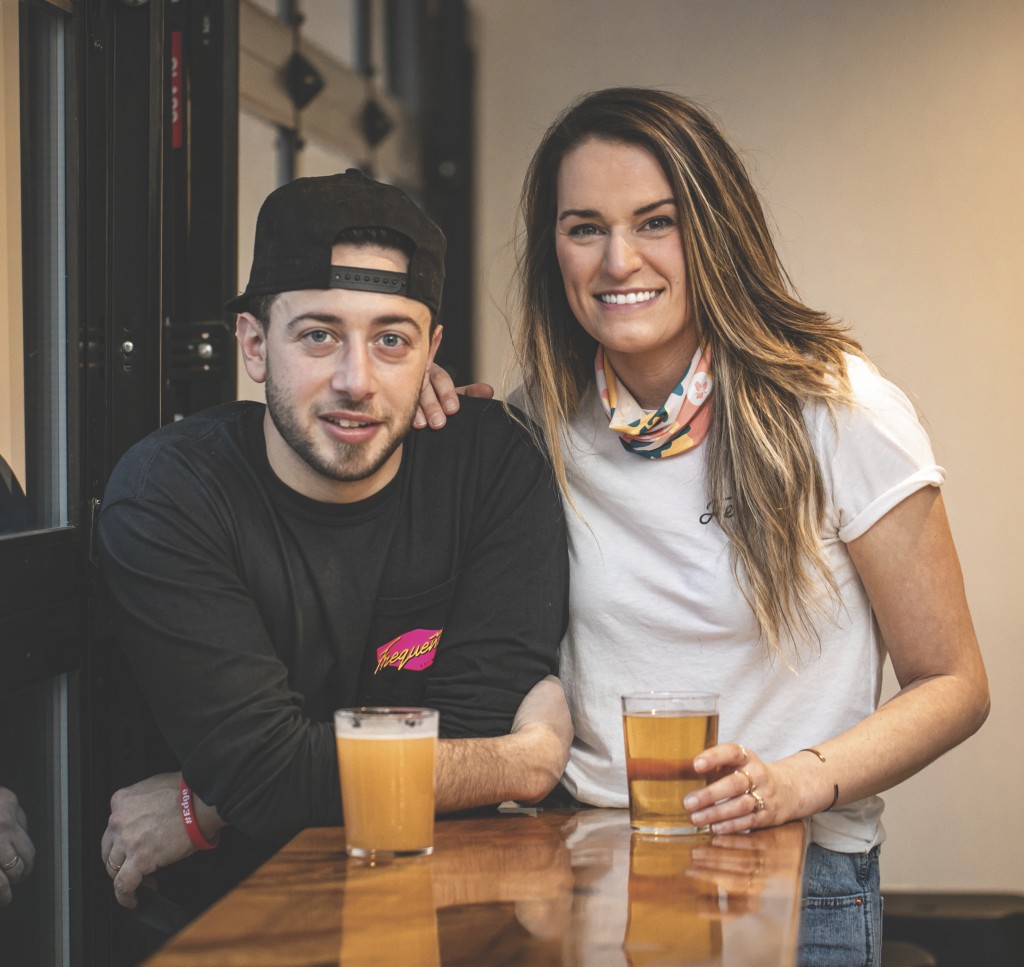 Following two years of research, planning, and fine-tuning their business model, David purchased a ten-barrel brew house system from the Back East Brewing Company in Bloomfield, Connecticut. The couple’s dream was finally becoming a reality.

The physical location for the brewery was one of the last hurdles to clear, as David says none of the prospective sites seemed like they would work. Then, as has happened several times along their journey, fate intervened and presented the couple with what they instantly realized was the perfect physical space: the old Byrne Dairy building on Route 332 in downtown Canandaigua.

Before they opened, the D’Allesandros completely gutted the old building, a job that Meagan happily took on as general contractor. Hoping to open up the space, allow more natural light to enter the establishment, and improve the building’s energy, Meagan worked to create an open layout, complete with bigger windows and doors, three glass overhead doors, and a clerestory. The result? A space that is as much about tasting craft beers as it is relaxing and hanging out with loved ones, she says.

“In the last few weeks prior to opening it was such a surreal thing seeing our final vision come to life. We are so excited to share this space and the beer with everyone who comes through the doors,” Meagan says of the brewery, which has ample indoor and outdoor seating along with an outdoor patio area complete with five fire pits and patio heaters, all adhering to social distancing measures.

With everything “feeling like it was meant to be,” David and Meagan opened up Frequentem Brewing—which means “to gather with good vibes” in Latin—in August of 2020.

“We wanted to create a space with a fun, welcoming energy and vibe, some place for people to hang out and socialize over good beer. Between our passion for the service industry and the brewing process, this just felt like the right business for us,” David says.

Currently, the taproom features eight beers on tap, usually based on selections that are both popular and among styles the D’Allesandros personally enjoy. Meagan says an experimental beer is made available to customers either weekly or twice a month … or until the single keg is kicked.

“This allows us to try new things on a small scale, to continue to test recipes and offer new beers weekly for people to stop in and try,” Meagan says.

The couple loves to experiment with new beer offerings, and their current selections include brews with a local touch—the cream ale is brewed with all local ingredients—along with two New England IPAs, a pair of New England double IPAs, a maple pecan oatmeal stout, and two heavily fruited sours.

There’s also a cider and three wines, including a rosé, a cab franc, and a sparkling white, available for purchase. Beers are available for sale on draft in the taproom or in four-packs of cans and crowlers to go.

Patrons who visit Frequentem can also enjoy a small selection of snacks with their craft beer, including two types of ciabatta pizza, a bread bag, and assorted types of popcorn.

The opening of Frequentem, during the middle of the worst pandemic in more than a century, couldn’t have come at a more challenging time. But while the path to brewing success has been fraught with obstacles, the D’Allesandros are pleased with how things have progressed during the first six months.

“We didn’t know what to expect. At this point, we are just trying to keep up with demand and find a balance. Customer service has always been such a passion for us. We love making people feel welcome and making sure they have a good time. The way beer brings people together and builds a community is so special,” Meagan says of the brewery, which is operating at its maximum capacity of fifty percent.

“The local community has been beyond supportive, and the community that is building within the brewery is amazing to be a part of. At the end of the day, my approach to beer puts drinkability at the forefront. Our tap list has a little something for everyone. Ultimately, our goal is to continually put out the best beer we can and keep the space with a fun, energetic, and inviting vibe,” adds David.