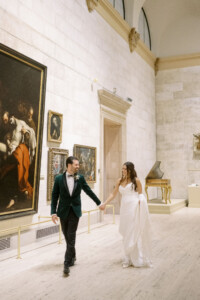 Stephanie and Kris Klinkbeil wanted a unique and interesting place to spend their special day and celebrate with friends and family. They designed their day to center around the Neighborhood of the Arts and knew that the perfect spot for their reception would be the University of Rochester’s Memorial Art Gallery. After a church ceremony, the party braved the Rochester cold and headed to the MAG to celebrate the new union.

“We had around 200 guests for cocktails in the Vanden Brul Pavilion followed by dinner and dancing in the ballroom,” Stephanie says.

The Klinkbeils took full advantage of the MAG’s beautiful campus. They hired local design and floral companies to help furnish and decorate the space and turn the already picturesque area into their perfect venue. The couple was married in December 2021 and embraced the season with fur, velvet, and other dramatic winter details.

Ten-piece band Silver Arrow helped the crowd dance the night away. The Sunday after the wedding the Klinkbeils escaped to Mirabeau in Skaneateles for a three-day “mini-moon.”They waited until April 2022 to celebrate their official honeymoon in Italy, where they explored Rome and the Amalfi Coast. 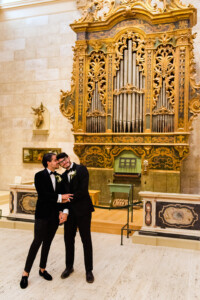 Max Stern and Matthew Cotroneo were married on May 28, 2022. The couple met several years ago through mutual friends. Their first date was dinner at Lento in Village Gate. Little did they know that just four years later they would be married right across the street at the MAG.

The couple chose the MAG because Stern’s grandfather, Gary Stern, used to take him and his sister when he was younger. Today the museum holds a special place in his heart

A religious element in the wedding was important to Cotroneo’s father, so they decided on a traditional Jewish ceremony. They had a chuppah (a small collapsible tent) as well as a Hebrew marriage contract called a ketubah. The couple also incorporated the ceremony of the breaking of the glass under the chuppah. This tradition symbolizes the trials and tribulations that are a part of marriage as well as the promise that they will stand by each other during life’s toughest moments. A less traditional, but definitely on-trend, aspect of their wedding was the inclusion of their beloved pet. Lucky, a schnauzer-yorkie mix, was the ring bearer.

The reception décor was based on blue and white Chinoiserie porcelain. It was “Very Martha Stewart and Hamptons chic,” says Stern. Everything from the table centerpieces to the invitations incorporated this elegant theme. Stern chose this “timeless” style so that he could look back at his wedding day and still be happy with how it looked.

Stern and Cotroneo celebrated their honeymoon in Cortina, Italy.