Eyes on the prize

My checkered eyeglass-wearing past began at three years old. Included was an eye patch over a lazy eye that I’d peek out from under any chance I could. Starting kindergarten as the only kid with glasses led to a second-grade pronouncement to my parents that I would now, at age seven, no longer be wearing my glasses. While they were mortified, I was determined. I squinted until twenty-seven years old, when I discovered the power of a well-fitting pair of contacts.

Walking into One Hip Chic last month with a heavy heart and a dose of skepticism was nothing new.  I barely expected to find anything that would even resemble a pair of glasses that suited me, much less a pair I loved.

Greeted by shop owner and optician Tamra Asmuth, I eased into a chair at a glass table. After brief introductions, Asmuth, wearing large round brown frames, stepped back to “analyze” my face and coloring.

She selected a few frames that were fun and flirty before I admitted to being perhaps too conservative for her shop.  Upon her suggestion, we explored shelves and paper-lined drawers filled with frames by Theo, Anne & Valentin, Sabine Be, and Metronome as I made a few tentative selections.

I left having purchased glasses I love not only for their styling but for the quality of the lenses which have so little distortion and are so very light. I am convinced these are the first pair of glasses I’ve ever purchased that are truly well made.

Asmuth’s story begins on the farm she grew up on in Holley, New York. While she wouldn’t trade her upbringing, she admits she always dreamed of other places.  Her business today takes her to Europe to purchase glasses at trade shows in Paris, Germany, the Netherlands, Italy, and beyond. 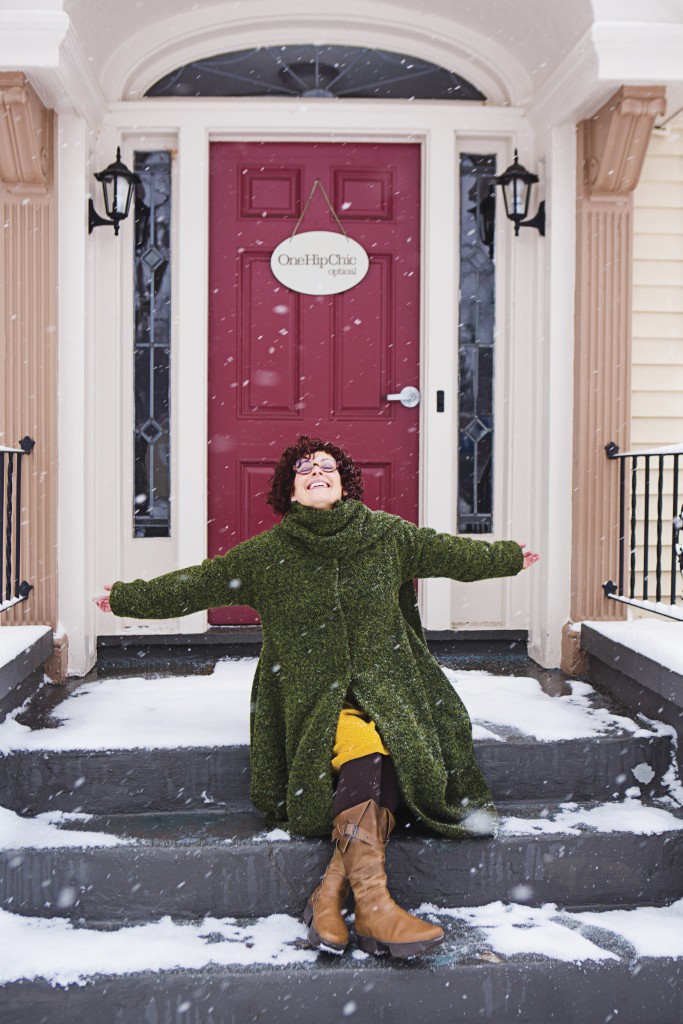 Tamra Asmuth outside of the shop

A part-time job in an optical shop at nineteen years old led to thirteen years working in the field, where she learned the business from the inside out. She visualized, in those years, what her own shop would be like.

“I’d imagine the products I’d sell, the décor, the vibe of my shop, how I’d treat customers and I guess eventually I just realized that things don’t happen on their own. It was a good life lesson. You have to make things happen. Dreaming is where it starts, but execution is key,” Asmuth says.

She secured partial funding from family loans but still needed more capital to open for business.

“I can cry telling this story.  I’d found a space on Park Avenue for the shop yet still didn’t have enough funding to launch the venture. My future landlord asked to see my business plan just as I was about to go to a bank to ask for a loan. He liked what he saw and loaned me the remaining capital. This confirmed a belief I hold: when you’re on the right path, doors open that you could never imagine,” she says.

In 1997, after she became a licensed optician, One Hip Chic opened in a rented space on Park Avenue.

Asmuth built her business on the premise that eyewear is more than just a medical device. It’s a fashion accessory, wearable art. She found her niché market catering to creatives by offering unique, upscale eyewear. 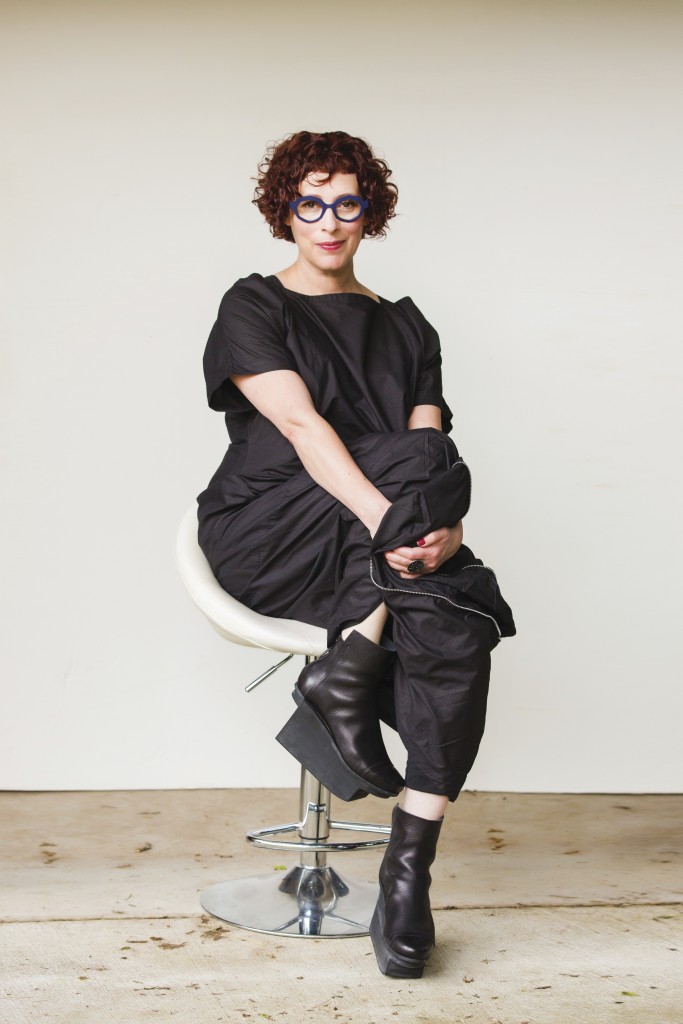 “People say Rochester is so conservative. I’ve found this city is home to lots of creative people,” Asmuth notes.

Her optical shop has been so successful that One Hip Chic was named America’s Finest Optical Retailer in July 2020 by Invision magazine, a national trade journal.

Asmuth’s motto, ‘Nothing ordinary,’ is evident in all she does down to the uniquely designed blue paper box her glasses come in (that looks like a lunchbox) and the custom lens cloth that is complimentary with each pair of new glasses.

This business has been the perfect match for Asmuth. “I embrace my own creativity, so I guess my shop appeals to other creative people,” she says. “The store’s design follows my aesthetic. I believe minimal makes for a clearer mind.”

Her employees share more than Asmuth’s creative approach to business; they’re her adult children. “My kids are the greatest employees. My daughter, Rachel, helps out with special events, Adam is in charge of creative. Noah handles day-to-day operations at One Hip Chic’s sister store,” she says. 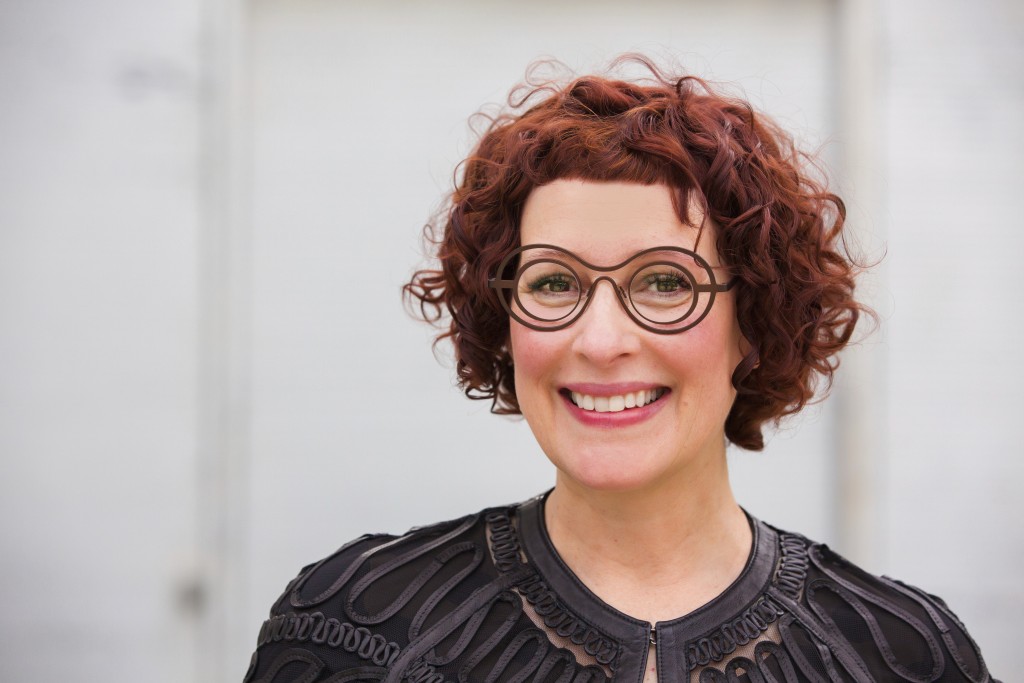 Tamra Asmuth smiles behind a pair of her signature frames

Asmuth likes to dispel common myths about eyeglasses, particularly when it comes to progressives, also known as no-line bifocals.

“Customers come in and tell me they will never be able to adjust to progressives because they know someone who tried them. There are now over 350 types of progressive lenses. I encourage my customers to give progressives a try,” she says.

When she suggests non glare lenses, some customers are resistant to the idea. “Non-glare lenses have been around for about fifteen years. In the beginning, they would smudge more easily than regular lenses, and inexpensive coatings could show a color cast. Manufacturers have now perfected lens coatings. Today they’re so vastly improved, there is no comparison,” she says.

Asmuth expanded her brand by opening Sole by One Hip Chic in November 2017, when she moved her business to its current location.

“I think of Sole by One Hip Chic as a sister store to the optical shop: two shops offering fashion accessories that are functional art, all under one roof,” she says. 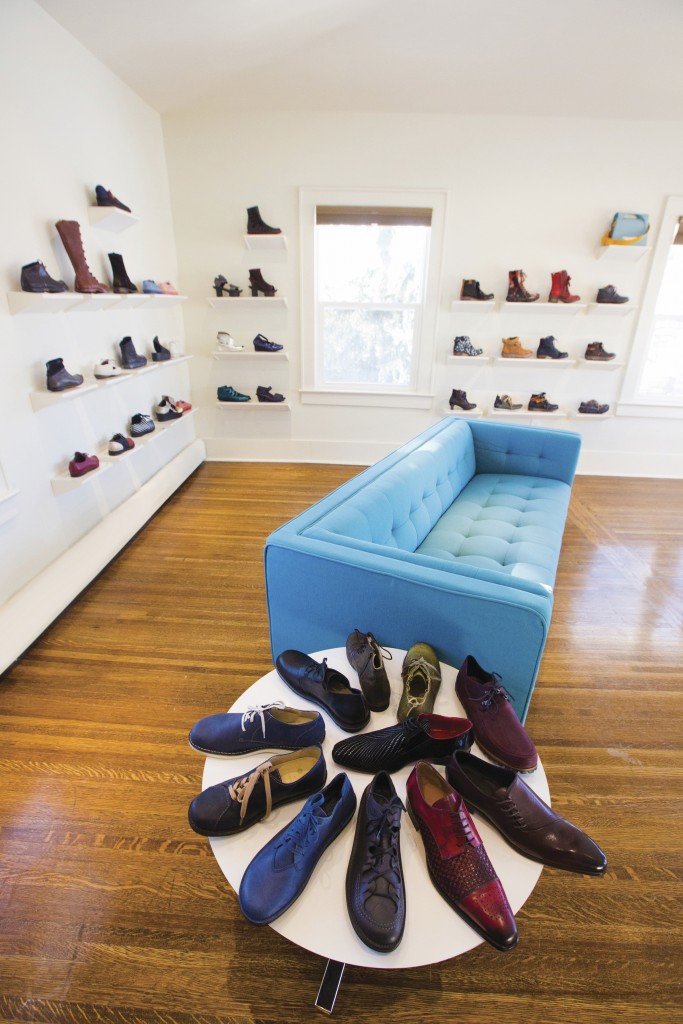 The interior of Sole by One Hip Chic

“We feature handbags made from top-grain leather by two sisters in Italy,” she says. “Shoes and bags are artfully displayed on white walls and shelves throughout the store.”

An aqua couch and red-orange footstools make the space feel more like an art gallery than a shoe store.

“Customers often ask me why I built two fashion forward businesses and why I built them here? I really love my businesses. My goal is to help people bring out their unique style.”

“And why Rochester?  Well, this is a very creative city. Rochester has been home to visionaries such as Susan B. Anthony, John Jacob Bausch [Bausch and Lomb], George Eastman, Albert Paley, and Wendell Castle. Relocating has never crossed my mind. I love to travel, but I love to come home just as much,” Asmuth says.