It’s pretty easy to feel uninspired in the low–light days of winter. If your space could use a post-holiday infusion of bright, contemporary style, Rochester designer Chelsea Fay might have exactly what you need. Her new collection of home décor showcases juicy, vivid colors and unique hand-created patterns and includes linens, pillows, and art prints. She hopes that the midcentury-inspired floral and fruit patterns have a subtle grounding-in-nature effect while also being joyful and inspiring. “I’m very interested in how color and pattern affect people’s emotions,” she says.

Fay, thirty, is originally from Newtown, Connecticut. She is from a family of artists; her parents met at a craft school and she and her brother, now a graphic designer in New York City, “had a really artistic upbringing.” Her father is a woodworker and had a shop in the basement, and her mother is a textile artist who taught classes out of their home.“We were always kind of like … bombarded with colors and fabrics” in the house, she says. Fay was an avid soccer player as a child, but then an ACL tear in middle school left her looking for quieter activities. One day she took a jewelry making class that lit a creative fire, and then and there she became passionate about a career in jewelry design. “I came home, and I was like, ‘This is what I want to do with the rest of my life,’” she says. After high school, she enrolled at the School for American Crafts at Rochester Institute of Technology, which boasts a unique jewelry program. It was an amazing, immersive experience, she says, where she ate, slept, and breathed design seven days a week.

After graduation, Fay worked for Barbara Heinrich, a well-known local jewelry designer, and she also began creating her own lines of jewelry, renting a studio at the Hungerford. Then, after designing mostly “artistic” silver jewelry for years, Fay needed a creative change. She enjoyed drawing doodles and patterns while working on jewelry design. In what felt like a natural transition, she started thinking about the patterns more. She took some time to learn more about the world of textile design and realized that a lot was happening in the UK. “It was like this huge industry that I hadn’t really tapped into before.” She had also been longing to travel. So, the pieces fell into place when she moved to England in 2017 to begin a two-year program in textiles at Leeds Arts University. She loved her program there and says that Leeds was a little like Rochester in that it was a smaller city. She loved experiencing the culture and history in England and took side trips to other parts of Europe. Fay then moved back to Rochester in 2019, ready to start building her own creative brand. “Then COVID happened,” she says. If there’s any silver lining here, it’s that the pandemic has given her plenty of quiet time to design.

Her current offerings are mostly home goods as well as a few decorative prints. “My main interest is in making the prints themselves,” she says. She creates them by hand or renders them with paper-cutting techniques. She has a keen interest in the psychology of color and pattern. Growing up, she was “surrounded by these colorful, beautiful things that I could use,” and felt moved to try to bring this joy to other people.While in art school she studied how colors can affect the brain, both by reading published research and by conducting her own small studies. Blues and neutral colors might be calming and may be good to add to your space if, say, you have a stressful job. Some people need energy and inspiration, so they might want to add bright colors and patterns to their living space or their wardrobe.

It’s a little easier to study the color aspect of this than the pattern aspect; patterns seem to be more personal. Fay conducted surveys as a student in which she showed abstract designs she’d created to a wide variety of people to gauge their reactions.“People had such wildly different reactions to the same thing,” she says, based on personal experience, memories, and where they had lived in the world. And while there’s plenty of research on how color influences mood, patterns seem to be trickier psychologically. So, in the end, she says, “you take a chance” and hope your work will resonate with people. She thinks of her floral pat-terns as grounding and universally appeal-ing. Natural imagery can provoke positive associations in people; the patterns featuring fresh produce might evoke a sense of wellbeing. You might not think about any of this when you buy it, she says, but it is intentionally layered in. The products created for this launch are all based in this positive psychology. 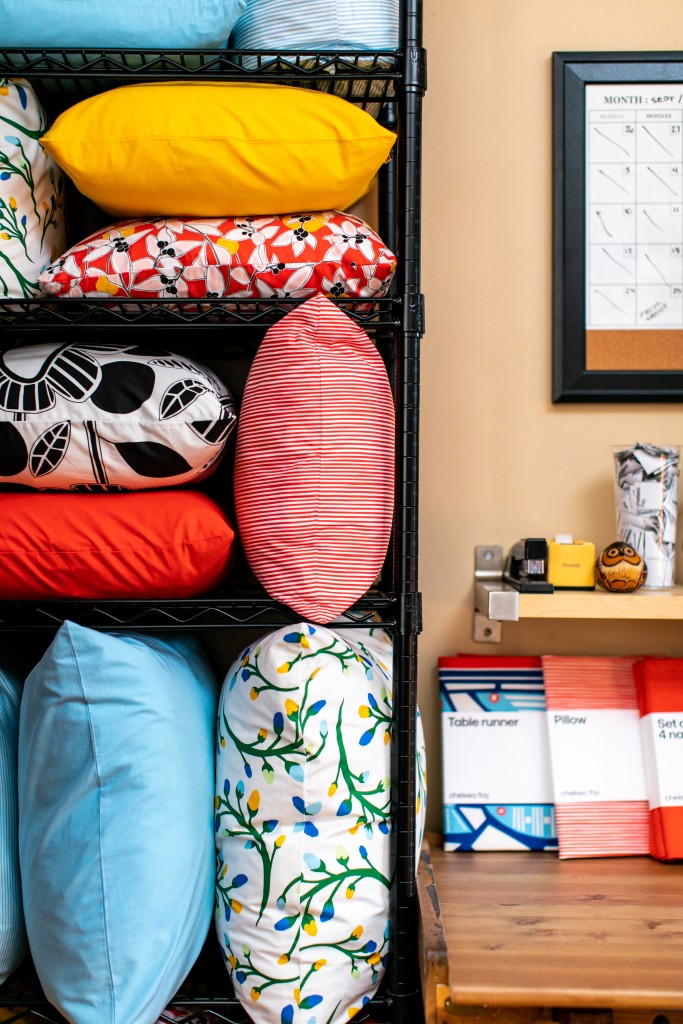 The focus on nature is more than surface level, as the products are produced with sustainability in mind. “It’s not as simple as ‘we’re sustainable!’” she says. There’s always more to learn when you’re committed to an eco-friendly approach. The products are built to last, and Fay strives to make the production process as low impact as possible. The products are locally designed, printed, and sewn, and Fay aims for complete transparency. Wherever possible, she partners with suppliers whose ethics match her own.

She uses organic cotton and linen, and the designs are brought to the fabric using digital printing. Using digital instead of screen printing cuts down on a lot of water usage, she says, and leaches fewer chemicals into the environment. As a bonus, digital printing is an economical way to include many colors at once, rather than incurring an expense with each color as screen-printing would. This more contemporary technique is a natural fit for Fay’s intricate and colorful motifs. Digital printing is also convenient in that there is less equipment. Products purchased from the website are shipped in recycled mailers, and she is also trying to find creative ways to use up and repurpose fabric scraps.

Local manufacturing is also a huge ec logical bonus. Fay is working with a sewist in Rochester who is an Afghan refugee. This is her first time handing over any part of the process, and it is going very well. Fay loves working with someone she knows as opposed to using a factory.“I can see where he works … it’s really great.”

Fay’s parents are thrilled with her career. “They are super supportive,” she says. They were her very first customers, and her mother has been a great resource for workshopping ideas. “You really need that extra opinion,” she says, especially when you are flying solo as an artist and not sharing studio space with anyone.

You can shop for Fay’s products at chelseafay.com They are also available at the MAG gift shop and Shop 1 at RIT. She is still finalizing plans for winter but hopes to have some in-person pop-up sales and to take part in some art events.

In terms of future plans, Fay is excited to launch some new products next year, so watch for more unique and joyful work.