Fairport’s revitalization of a local landmark

There’s a business renaissance happening in Fairport’s North Village, largely due to the extensive restoration of a local landmark. The former American Can Factory building, set back from North Main Street and alongside Parce Avenue, has hosted a number of industries in its 132-year history and is now being renovated and rented out to a variety of new businesses. The factory’s high ceilings and blank-slate floor plan allows business owners to design shop space from the ground up. This, coupled with the busy village location, has made it an attractive, sought-after venue for restaurants and breweries. Four establishments in this location share their processes of building their businesses in the local landmark and how the factory’s history influences them.

History of the can company

The old factory as it stands today is a compilation of many additions and add-ons over the years. The building was designed in 1884 by renowned Rochester builder Andrew Jackson Warner for the P. Cox Shoe Company manufacturing plant, one time the second-largest shoe company in New York State. From there the building changed hands a few times and served as a cold storage cabbage facility and a manufacturing hub for hay baling presses and pulleys.

The building hosted its first canning business in 1898 with Cobb Preserving Company, which was eventually bought by American Can in 1908. The site was responsible for canning a variety of produce, including cherries, peaches, and succotash, which was then distributed around New York State and beyond. At its peak in 1960, the factory could produce 240,000 cans in eight hours. Along with the common produce can, the factory started producing beer cans around 1958. Although the beer can was not developed in Fairport, the factory was forever known as “the home of the beer can.” 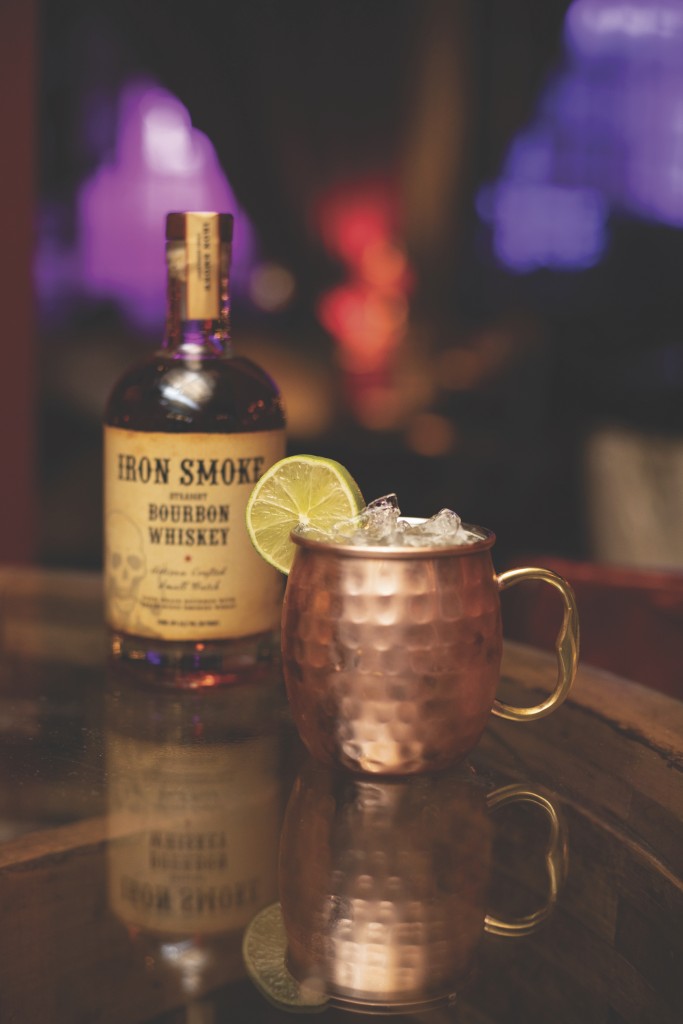 Tommy Brunett toured the world as a musician before coming to Rochester to produce world-class bourbons and whiskeys. His idea for Iron Smoke came to him one summer while he enjoyed two great American past-times—smoking meat while sipping whiskey in his own backyard. He decided to develop a line of lightly smoked whiskey, and thus Iron Smoke was born.

Today his distillery produces some of the highest-rated bourbons in the country, with Forbes magazine recently naming them one of the five best bourbons beyond Kentucky, the home of modern-day distilling. Although Iron Smoke put whiskey production on hold in spring 2020 to partner with Rochester Midland Corporation to make hand sanitizer for front-line workers, they are back in full swing creating signature spirits like Straight Bourbon Whiskey, Rattlesnake Rosie’s Apple Pie Whiskey, and Maple Bacon Whiskey.

One of their signature drinks is the Erie Canal Mule. The name is a nod to Fairport’s canal-side history, remembering the mules that used to tow canal boats. Preserving the history of the building was important to Brunett, who renovated the space with care. “We didn’t come in with sandblasters, we kept everything that we could—the old brick, old windows, and original boilers. The space feels happy and alive again; it has a life of its own.” 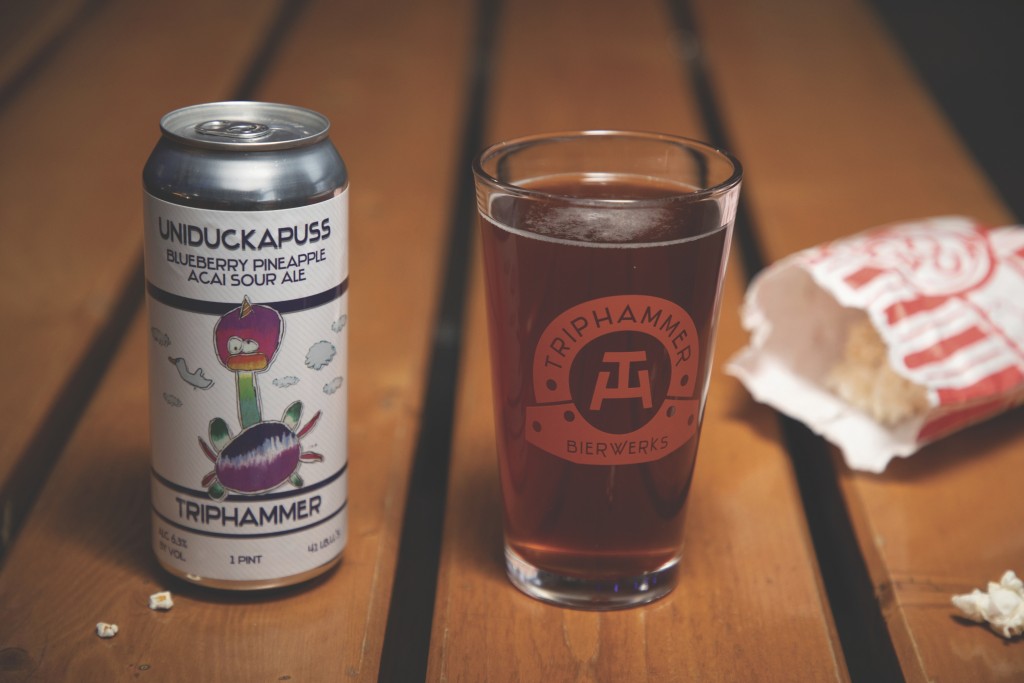 In the early 2000s Scott Denhart was living in Brooklyn, New York, and loving the local beer scene that the city had to offer. After taking on home brewing as a hobby, he told his wife that the only way he’d leave New York City would be if he could expand upon his craft and open his own brewery. Although it took Denhart seven years to find the perfect location for his new business, the space at the Can Factory checked all his boxes: high ceilings, lots of space, an outdoor area, and ample parking. “I had other leases fall through so I ended up here by happy accident. At the time I didn’t know it was the home of the beer can; it’s a fun piece of trivia.”

Denhart finds inspiration for Triphammer in many areas. He plays upon the Can Factory’s history by offering can-shaped glasses, and his beers are only sold in cans. Inspiration also comes from his family. His Uniduckapuss Sour Ale was named by his daughter, who also drew the picture for the label. 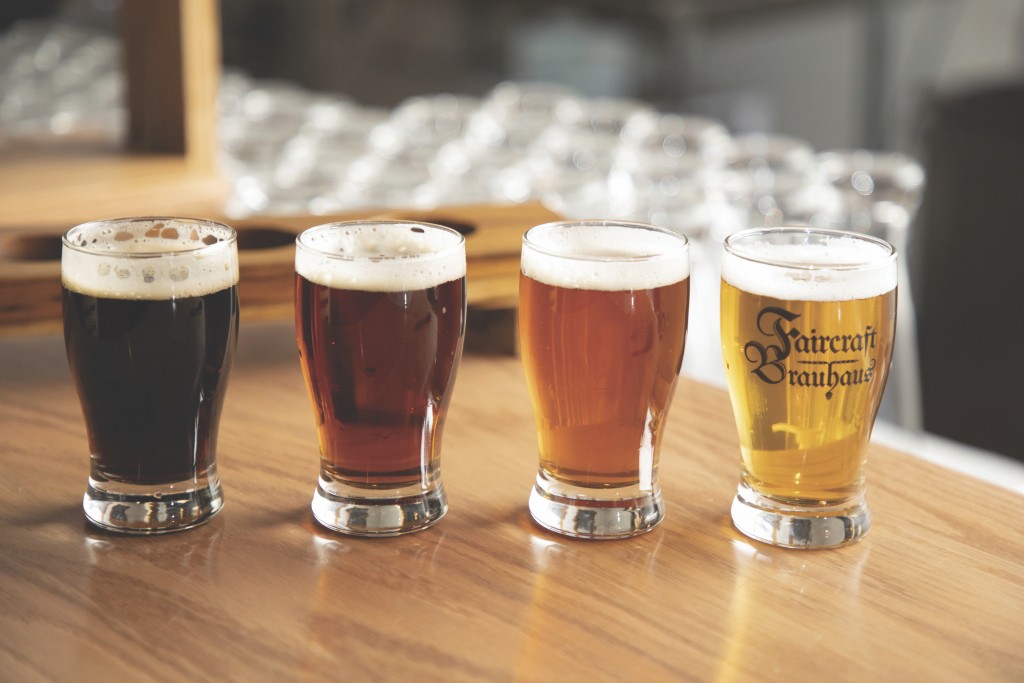 A flight of beers at Faircraft Brauhaus (Left to right): the petrev autumnal ale, iron hearth, and spinning gold

When Mattias West was conceptualizing his future brewery, he had two main goals: it had to be in the right location and offer the right atmosphere. West envisioned a place where people could enjoy drinks on the premises while listening to live music and admiring locally made art. Faircraft Brauhaus opened in 2016 and is true to its name; the “craft” in Faircraft represents craft beer, arts, and music. Art by local artists hangs on the walls, a Steinway grand piano greets people as they walk in, and musicians are always on-site to entertain. “I wanted Faircraft to be an experience,” he states, “Our craft beers are meant to be enjoyed on the premises, and the experience is important. Good lighting, good music, good art … it’s a welcoming community place.”

The location at the Can Factory helped bring West’s concept to the north end of Fairport. The space not only allows him to brew on the premises, but it also offers a large restaurant area, bar, outdoor patio, and parking lot to host food trucks. 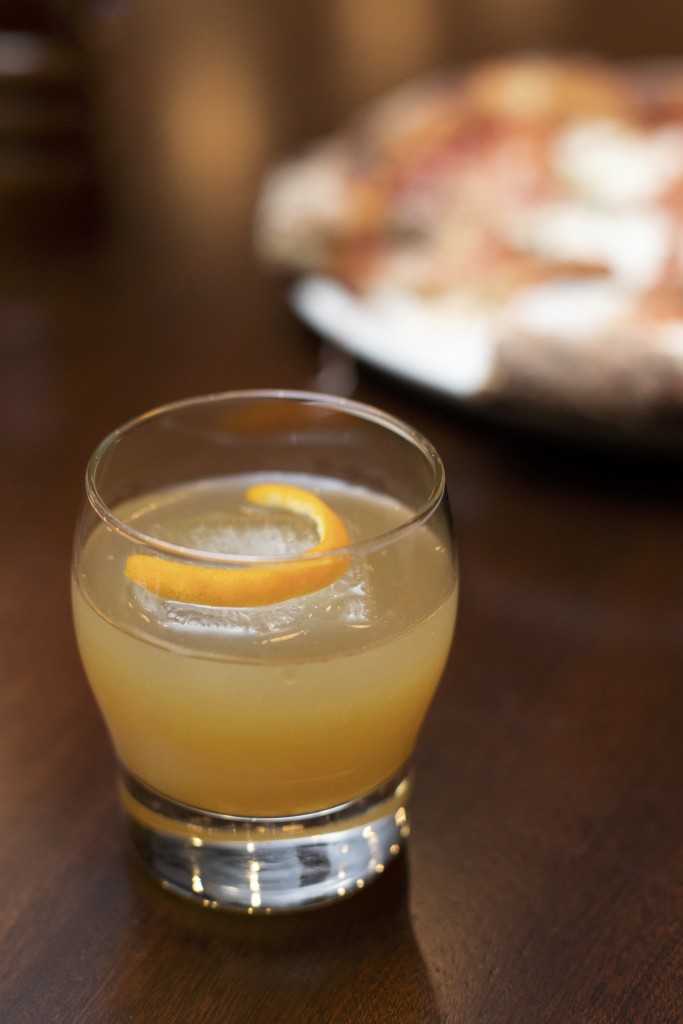 Even at a young age, Brendon Clar knew that he wanted a future in the restaurant industry. After attending culinary school and working at a variety of restaurants around the U.S., he leapt at the opportunity to purchase Compane in 2015. The restaurant offers a variety of modern Italian American dishes, including wood fired pizza, handmade pastas, wines by the glass, and custom cocktails.

Compane’s original location was on North Main Street, Fairport, until an opportunity arose to move across the street into the Can Factory location. Clar remarks that the new space “is larger overall, with a bigger, private dining space that feels more urban; [it has] almost a restored loft feel. It also gave us the opportunity to design our own kitchen.”

Clar’s specialty drink is the Smokestack Old Fashioned, which is aptly named for the Can Factory’s smokestack that can be seen on the premises. He hopes to collaborate with some of the other Can Factory businesses to develop other specialty drink offerings.