Like most popular American foods, the hot dog has humble beginnings.

While it’s descended from sausage, which is thought to date back to the first century A.D., the hot dog is a poor man’s meat tube, often made with leftover trimmings and spice combinations, smaller in size, and more affordable.

It was brought to the United States by German immigrants (Frankfurt, to be exact) in the mid-nineteenth century and—like all great street meat—first sold off a cart in New York City. By 1870, a man named Charles Feltman was selling them from a cart on Coney Island. But it wasn’t until 1916, when an employee of Feltman’s—Nathan Handwerker—began to hawk hot dogs at half the price of his Coney Island predecessor, that capitalism really kicked in. The first commercial hot dog brand, Nathan’s Famous, was born.

Rochester has its own hot dog claim to fame in Zweigle’s, a locally owned, fifth-generation family company that’s been around since the 1880s. The former butcher shop is now known for its “pop open” hots and other meat products: a vital part of care packages for Rochester natives who miss the taste of home.

Zweigle’s was the first to market the white hot, a variety developed in Rochester by—you guessed it—German immigrants, which is white in color due to different (or lack of) spices used in the meat mix. White hots were originally invented to use the cheaper cuts of meat left after making red hots but are now known as a richer blend of pork, beef, and veal. Zweigle’s began selling white hots at Red Wing Stadium in the 1920s, and they’ve been a regional favorite ever since. (Pro tip: try ’em on a garbage plate.)

If a white hot isn’t an option on a local menu, that’s almost sacrilegious. Fortunately, when married couple and F.L.X. Hospitality founders Christopher Bates and Isabel Bogadtke opened F.L.X. Wienery at Roc Brewing Co. in July, they were already well versed in the menu must-haves. 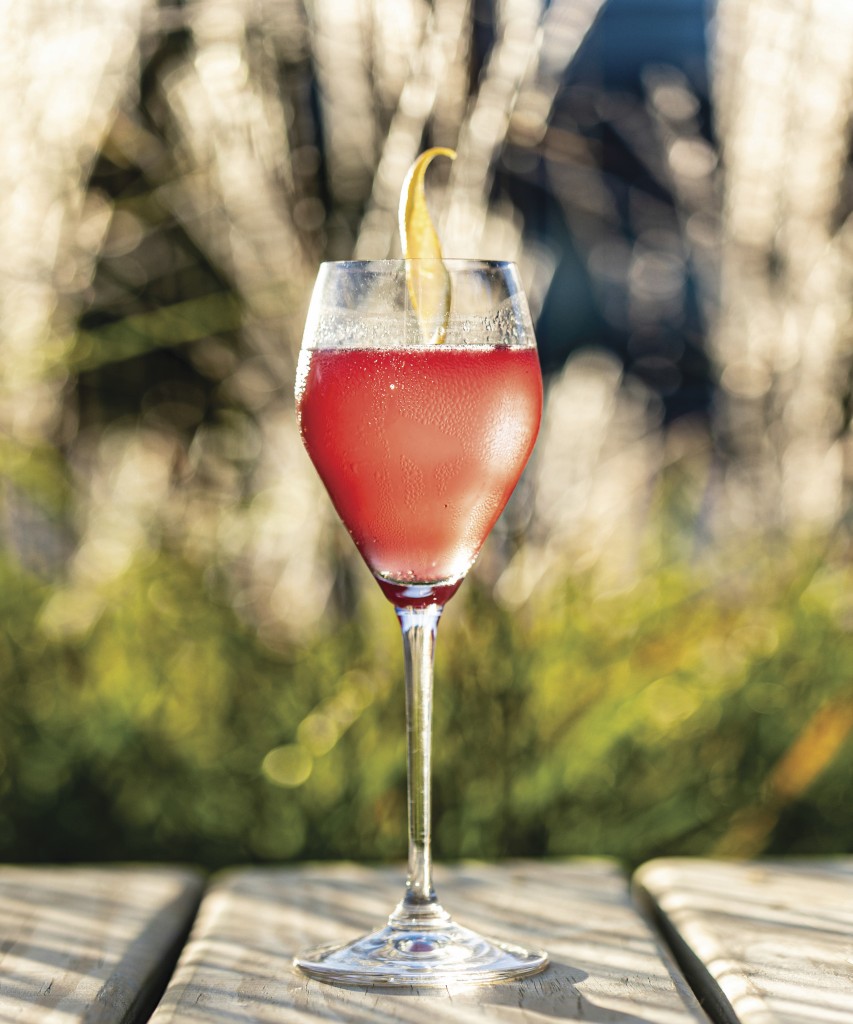 The Seneca 75, one of the restaurant’s specialty cocktails

The duo has deep roots in fine dining after spending a decade managing Relais & Chateaux/Grande Chef properties, including the Hotel Fauchere and The Inn at Dos Brisas. They relocated to the Finger Lakes region in the early aughts to help grow it as a worldwide wine destination. One of their most popular ventures is the first F.L.X. Wienery location in Dundee on Seneca Lake, which opened in 2014 as a lowbrow hot dog stand that also happened to have a fine wine list curated by Bates. That was just two years after he was named best young sommelier in the world and one year after he became a master sommelier—the first executive chef to ever hold that title.

F.L.X. Wienery was followed by the buzzy communal dining experience F.L.X. Table a few years later, and the group has since expanded to four Finger Lakes towns with a winery, a catering business, and more dining destinations.

Considering the vast wine knowledge Bates has, it’s a little surprising that the second F.L.X. Wienery opened in a brewery. But a visit to the spot proves otherwise, as Roc Brewing Co. founder/brewer Chris Spinelli’s lineup is perfectly paired with this comfort food–heavy menu.

A late summer Friday at F.L.X. Wienery found masked patrons lined out the door, waiting for a coveted patio seat. We were admitted by party, only to line up again inside so we could order from the counter-service menu. Most of the items have customizable steps (pick your protein, toppings), and there are gluten-free, vegetarian, and vegan options as well.

The interior of Roc Brewing was completely reimagined to allow for the addition of a small kitchen; a larger, central service counter; and more seating. There’s still an open area behind the dining room that flows into the brewery, the floors slick with water and the lights of the dining room shining off the tall steel barrels. This is where my friend Eric and I were seated, towing the line between the Roc Brewing that once was and the F.L.X. Wienery that is now trying. It was a busy night inside and out, tables filled with laughing groups who scarfed down the food delivered to them and slurped boozy milkshakes alongside cold beers.

Eric and I were having a deep discussion about happiness—he’d just finished The Book of Joy by the Dalai Lama and Desmond Tutu—and it struck me how, after months of solitary quarantine, this simple act of going out to eat on a summer Friday night brought me a comforting burst of nostalgia, if not happiness. 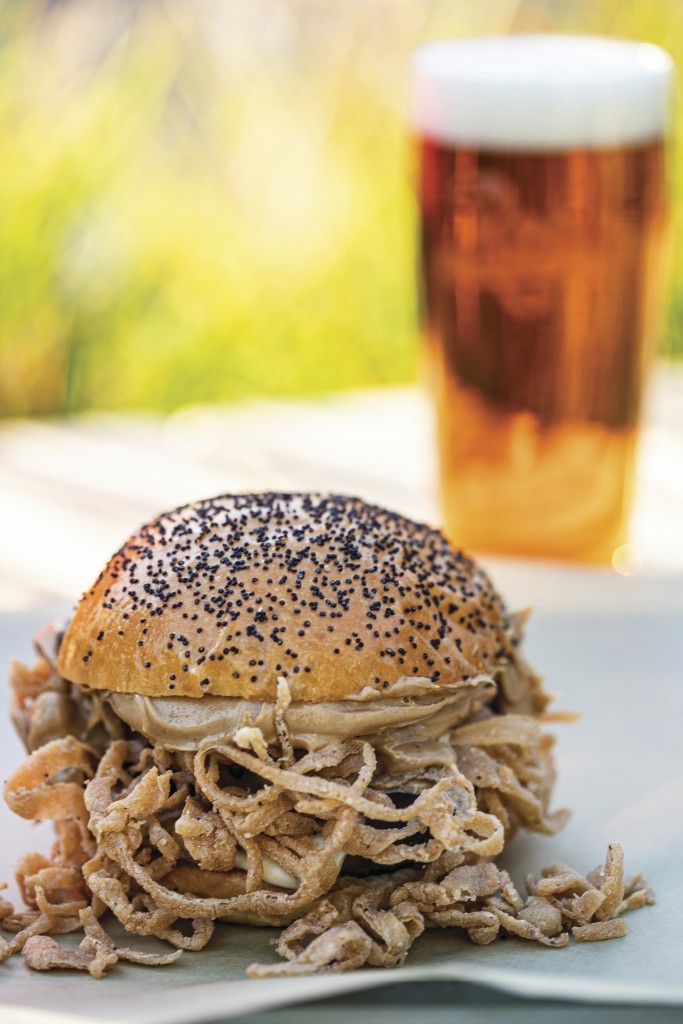 The Weinery’s own Peanut Burger

When our food arrived in checkered cardboard boats, we split everything down the middle and sent up a prayer for our mid-thirties digestive systems. This isn’t a fork-and-knife situation; it’s a two-hands, full send, can’t lose. We tried the Peanut Burger, which was an otherworldly experience for someone who loves peanut butter (me) but has never thought of it as a burger condiment (also me). French fried onions? American cheese? Bacon? My cholesterol and my burger standards will never be the same. Next up was the Chili Smothered White Hot topped with cheese curds, chili, fresh corn relish, and something they call “debris”—really just a mix of chopped peppers and onions. It’s an elevated take on the chili dog, and one that intertwined seasonal flavors nicely.

We ordered two sides of fries for our table (not here to play) but skipped the poutine since it’s grown ubiquitous around town the last few years. The Maitre Fries are thrown with lemon, garlic, parsley, and butter, and though the lemon was nearly undetectable, the heavy garlic and butter gave off a Vampire Fries impression. We also tried the Chili Oil Fries, which were coated in a vaguely spicy sheen and a nice respite from the busier foods on our table.

We paired our meal with Roc Brewing’s Weekend Speedo, a fresh, snappy Tangerine Sour IPA, and the Lagerithm, a bready, lightly sweet lager. There’s also a small wine and cocktail list available. Because we hate (love?) ourselves, we grabbed a Nutella milkshake to go, adding in a bit of pretzel for good measure. The salty-sweet mixture was delicious but too thick to satisfyingly pull through a straw—spoon needed next time around. 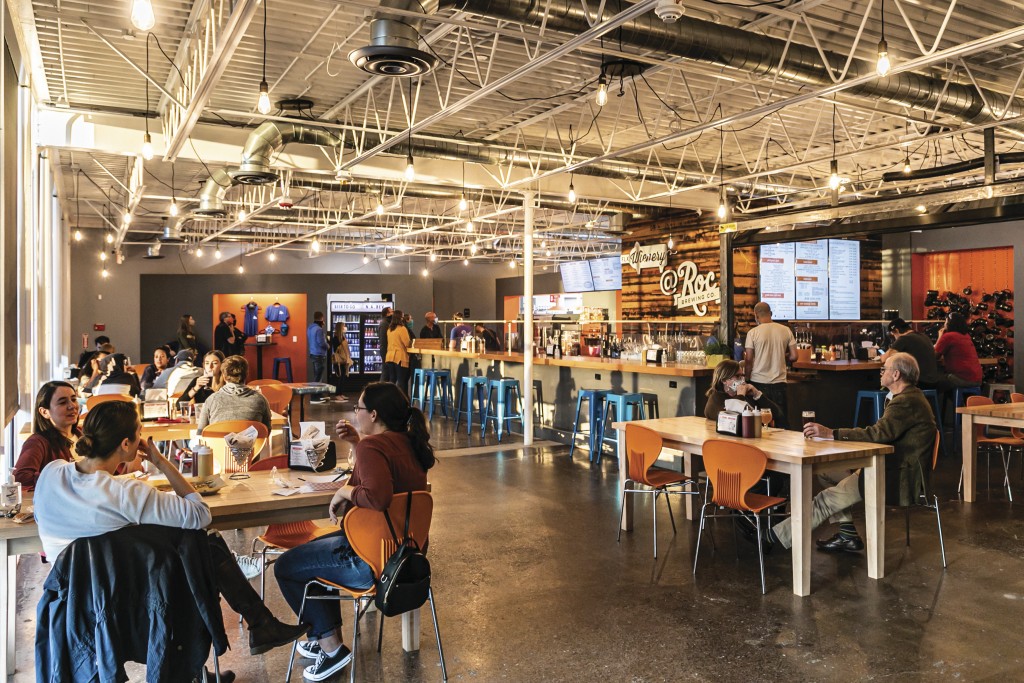 Customers enjoying the open space at the weinery

But then. Then, there’s the fact that a new restaurant opened successfully during the pandemic: a sign that our region believes in hospitality. The fact that one of the owners, Isabel Bogadtke, was out on the floor and in the kitchen cooking throughout the night. The fact that other industry folks were present to support.

Restaurants are the lifeblood of a community, and we’re proving we want—no, need—them to survive.