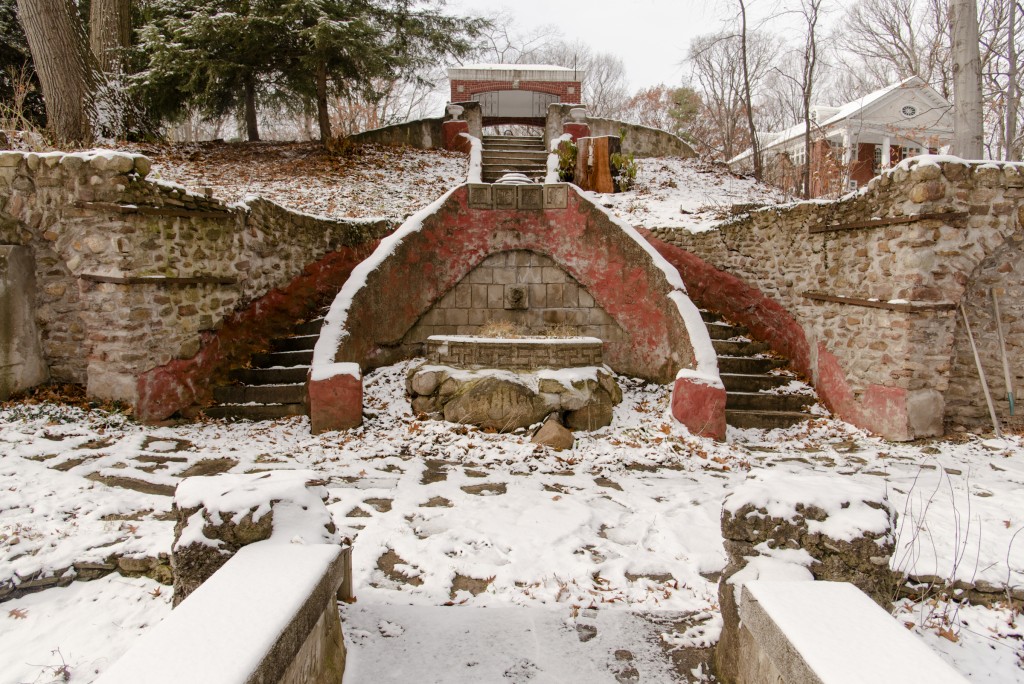 Like any buried treasure, unearthing a sunken garden in Irondequoit left many questions unanswered.

Twenty-four years ago, Stephen Schantz, a retired developer, purchased an estate home on Winona Boulevard surrounded by a steep ravine on either side. The cavernous space was heavily wooded, piled with debris and underbrush. Curious to see what was underneath, he began to excavate the land, clearing rubble to discover fieldstone and concrete walls that rise to St. Paul Boulevard, pathways made of stone, a pond and bridge, a fountain, and an ornamental wrought iron gate.

The buried garden, designed around 1918, was owned by William Bemish, an art dealer, and his wife, Georgia, heir to a drug company. Local historians don’t know much else about the garden, which spans half an acre. The history and origins of the elaborately terraced garden have been largely lost.

“While the design features are varied, original, and picturesque, the garden remains a mystery in one of its most obvious ways: we have yet to determine who or if there was a specific designer for this landscape. Several accomplished researchers have combed existing resources(archives, online newspapers, etc.), to no avail.

Even the date of the garden can only be estimated. The earliest mention of the garden, in a newspaper, is in a 1925 real estate advertisement for the house, across the street,” says Cynthia Howk, retired architectural research coordinator for the Landmark Society of Western New York.

“As the original owners of 959 Winona were involved in ‘the arts,’ one speculation about the origin of the garden is that they, themselves, designed it perhaps working in cooperation with a talented mason—as significant parts of the garden are of concrete and/or stone construction—as well as a metalworker to create the iron gate of ‘spider web’ design, that’s located in the ‘Moon Gate’ at the northeast corner of the garden,” Howk says.

Rochester has another notable sunken garden, in Highland Park—the Warner Castle Sunken Garden—designed by landscape architect Alling Stephen DeForest. DeForest is known for many beautifully landscaped sites in Rochester such as the George Eastman Museum gardens.

The garden at 959 Winona Boulevard, however, does not bear the signature stylistic features of DeForest’s work or of other locally renowned landscape designers such as Francis Hastings Gott or Pittsford native Fletcher Steele.

Howk says, in fact, there is no mention of 959 Winona Boulevard in the lists of projects for these three landscape designers. It was the Landmark Society of Western New York that recognized Schantz for his restoration and stewardship of the “Sunken Garden,” with a Historic Landscape Award in 2019.

When trolleys ran up and down St. Paul Boulevard in the late 1800s and early 1900s, this naturalistic landscape design embellished with grotto work and whimsical design elements (including the wrought iron “spider web” gate and moon and star stonework) bloomed with iris, peonies, bleeding heart, astilbe, and hosta. 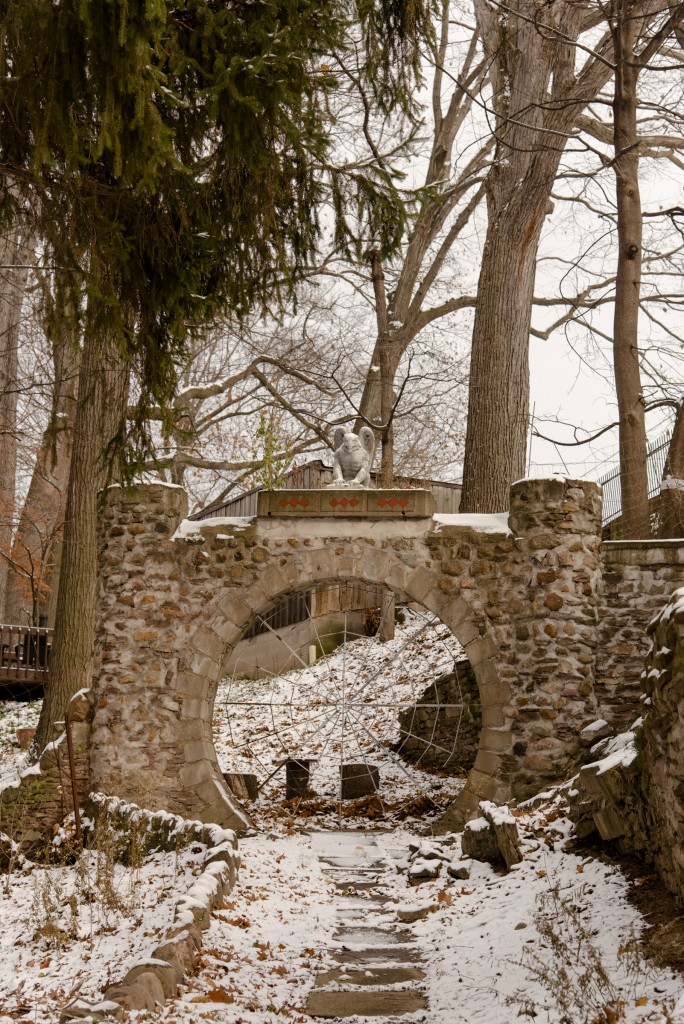 “Some of the stone pathways were visible at the time I began excavating the site, but that was all. The amount of debris was remarkable,” Schantz says.

The restoration took several years. It included a channel foundation to a pond filled with koi fish and water lilies. The pond, placed at the center of the garden, is in line with a Victorian-style fountain. A gently arching concrete bridge spans the pond while a canopy of mature maple and oak trees provides shade amid an intriguing play of light.

According to Howk, there was significant structural work involved in the construction of the garden, particularly in connection with a large, concrete retaining wall along the eastern edge of the garden, adjacent to a sidewalk on St. Paul Boulevard. This retaining wall was built to secure the tall embankment that borders the east side of the garden. Above the embankment, trolley tracks ran along the tree lawn where street cars must have created strong vibrations. The massive concrete retaining wall was needed to avoid collapse from the Rochester to Summerville streetcar dating back to the 1890s. Howk says arts and crafts–style concrete buttresses were added to the wall later as decorative elements.

The garden was once at risk of being filled in with coal and wood ash in the forties and fifties, but today it is a local landmark.

Schantz’s wife, JoEllyn Tufano, says curiosity about the garden hasn’t waned. “Occasionally, someone will ring the doorbell to ask if they can tour the garden. We open the garden every other year for a formal garden tour fundraiser. Over 500 people came through during the last tour.” The homeowners have also hosted weddings in the garden.

And while mystery still lingers, this garden has been restored as a lovely addition to the glorious gardens of Western New York. Unique to this region, the “Sunken Garden” at 959 Winona Boulevard is a must-see for garden lovers.