In the spring of 2020, I was teetering on the edge of a complete breakdown. Who among us can say we were doing great at this time in the pandemic? I started hiking around Mount Hope Cemetery every day after work, at first to just get my body moving to quell difficult thoughts and feelings. Due to my fun and cute obsessive compulsive disorder, walking around Mount Hope every day became a compulsion. I wasn’t complaining about it. The ache of climbing up and down the hills and watching the seasons pass in the place I considered to be the most beautiful in the world was a comfort during a time I was unable to find it anywhere else.

As a self-proclaimed spooky bitch, it felt on brand to be obsessively attracted to a historic cemetery. I don’t have a great way to explain it to people other than the air feels thick with the presence of the people who rest there. It is a place to be alone but also engulfed in community. It often felt like magic there when I would look up from the ground and stumble upon unusual little sights that were gifts just for me. I started to keep a running list of some of the wild stuff I saw.

Here are some of my favorites:

During my cemetery-walking phase I stumbled upon a book about Mount Hope at a local Goodwill. While I knew spiritually that this place was an anomaly, I never knew the historical significance of the cemetery itself. It turns out that the burial ground was designed to foster the same kind of gathering and community above ground as well as below.

While Mount Hope can seem like a portal to another time, when it was designed and erected in the nineteenth century it was considered a new concept on the American landscape. Designed by Frederick Law Olmsted, Mount Hope was one of the first cemeteries in the United States that was not strictly designed as a place to inter the dead near a house of worship on the outskirts of town. These older style of graveyards were often unkempt, and visitors were susceptible to disease. They were also prime real estate for body snatching.

Olmsted is usually associated with the landscape architecture of New York City’s Central and Prospect Parks and, more locally, with bringing those modern sensibilities to the design of many of Rochester’s own parks, including Highland Park. Mount Hope Cemetery is one of his lesser-known works, but its historical drama and romantic landscape has the architect’s name written all over it.The focus of Mount Hope was less to methodically store the dead and more to celebrate those passed with a beautiful place where the living could gather to both mourn and rejoice.You can see Olmsted’s influence when you compare the design elements of his work in Central Park with Mount Hope: rolling hills with curving paths that embrace the landscape, a vast expanse dotted with natural-looking lakes and ponds instead of structured manmade borders. Mount Hope pushes these design elements to the max with almost whimsical hills, both manmade and natural, that encourage the wandering viewer to see what they will find just around the bend. This is where the magic feeling must come from, where I felt like every day I could find a new fantastic thing at the bottom of the hill or behind a huge tree. This new style of graveyard became popular all around the US in the nineteenth century, and the trend is commonly referred to as the Rural Cemetery Movement. An important distinction between this rural style of cemetery versus the traditional style of old was the focus on sanitation and cleanliness standards that would invite the public to patronize the space for reasons other than just mourning. The cemetery is fenced in and is maintained by gardeners and supervisors, and its location in the city prevented those old-school grave robbers from targeting Mount Hope.

These new types of cemeteries also allowed for families to customize the resting places of their loved ones. They could honor their memory but also plan for the aesthetics of their resting place. Family plots can be on raised land, fenced in, or adorned with ornate sculpture or masonry.You can find monuments influenced by Greek, Roman, Egyptian, and European sensibilities. Bench-like structures were built and erected in places where the family hoped future visitors would stop to rest, and tall human statues with dark, tear-like lines streaming down their faces tower over these resting places. One of the most beautiful places to be stuck in the rain is at Mount Hope Cemetery; you can see the place in an entirely new light. 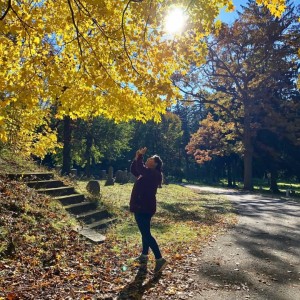 Rochesterians often associate Mount Hope with some of its more interesting monuments. Of course, we start with the fact that it is the final resting place of both Frederick Douglass and Susan B. Anthony; some may even mention Nathaniel Rochester if pressed. A few other favorite spots at Mount Hope include a monument inscribed with the words “Now I Know Something You Don’t” and a marble dog on the headstone of Clarence L. Conklin who slants up on an incline to look for its owner in the heavens.

If you go through the photos on Instagram tagged at Mount Hope, you will find lots of folks, both young and old, who find a feeling of home in this place. More than 350,000 people are buried at Mount Hope Cemetery, and the population of Rochester is currently about 204,768.

In a way, finding peace within yourself at Mount Hope is the first step on the path to becoming part of a larger community. You and thousands of others have found a quiet, special place to reflect and seek peace. And sometimes we just need to look at some beautiful things Mount Hope has to offer, be it flowers or hills or statues. Whether you’re taking a quiet walk between shifts at the hospital or just getting a little exercise, there’s a magic to be found in Mount Hope Cemetery. That magic is a celebration of both the living and the dead. This year marks Olmsted’s 200th birthday.Visit Olmstead200.org to learn more about him and his life and to participate in the nationwide celebration.