The idea of coffee having a flavor profile or notes or being assessed in a way similar to wine, or even telling the story of the family that farmed and produced the beans, seemed preposterous twenty years ago. Helping pioneer what’s known as coffee’s “third wave,” Ithaca’s Gimme! Coffee has been innovative in giving coffee character and a sense of terroir. Rather than name its blends simply “light,” “medium,” or “dark,” Gimme! features a spectrum of blends named Rally, Leftist, and Stargazer and descriptors that resemble the way one might describe wine. Earlier this year, the website Eater called Gimme! a “Third Wave Trailblazer” and credited the company in helping bring third-wave coffee to New York City.

“Gimme! is a coffee company that is consistent, has a foothold in our industry, and has amazing resources,” says Rory Van Grol, who owns and runs Ugly Duck Coffee in Rochester’s East End. “They have amazing resources, and they care not only about the product they serve but about the people serving it.”

Van Grol, who first became acquainted with Gimme! while working at natural food stores, describes the company as having “resources and trainings that are invaluable to a small startup coffee company.” 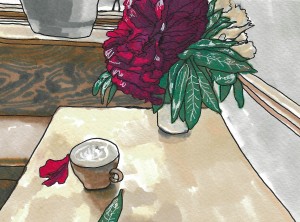 Now having cultivated a standard in brewing specialty coffee like the one Van Grol describes, Gimme! wants to innovate in a different way. With a union and a new CEO, Colleen Anunu, Gimme! is now moving beyond serving great coffee and is making an increased focus on the company’s workforce and making sure marginalized voices in the coffee industry are heard. Its founder, Kevin Cuddeback, supports these changes and believes Anunu is the best person to see that vision through. “Colleen is a more engaging leader with a compelling background and vision for specialty coffee,” Cuddeback states. “Everything about her is geared for the position. She’s smart, fun, and motivated.”

Cuddeback grew up in Waterloo and graduated from SUNY Geneseo with a degree in communications. Afterward, Cuddeback lived nomadically, teaching in Maine, working as a radio DJ in Jackson Hole, Wyoming, attending auction school in Missouri, and doing some carpentry work intermittently. Returning to the Finger Lakes in 1997, he opened the Oak, a used bookstore and internet café, in Ithaca’s Collegetown neighborhood the following year; it served as his introduction to the coffee business. But business in Collegetown waxed and waned with Cornell’s schedule, and Cuddeback yearned for an endeavor with more consistent traffic. Rather than gravitate in or near the Commons, as Ithaca’s businesses often do, Cuddeback decided to open a coffee shop in one of Ithaca’s residential neighborhoods. “I surmised that the convenience for people waking up and low rents relative to the downtown commercial core would be advantageous,” he reminisces.

Gimme! first opened in April of 2000 on the corner of Cayuga and Cascadilla streets, and the gamble quickly paid off; a year and a half later, a second location opened up on State Street. In 2002, Gimme! expanded to Trumansburg with a location on Main Street. Capitalizing on the connections between Ithaca and New York City, Cuddeback made an even more ambitious move by opening a location in Brooklyn’s then-emerging Williamsburg neighborhood. Looking back, Cuddeback remembers: “I had confidence in what we were doing and thought it could be successfully demonstrated in the metropolis. It was a good bet, but challenging, as you might imagine.” Another location opened in Manhattan’s Nolita neighborhood in 2008. A few more locations in and around Ithaca and Cornell came and went; its most recent location opened two years ago on Hanshaw Road in Cayuga Heights.

It’s about the people

Over the years, Gimme! Coffee has made its name putting a face to the producers who grow the beans it sells in its stores. “New York is so geographically removed from coffee-producing regions that it is easy to lose sight of the fact that our morning beverage is farmed and handpicked by humans,” he says. “Since for many coffee farmers, it is their life’s work, we thought it would be worthwhile to refer to them by name in order to connect humans, rather than a faceless, nameless supply chain.” In recent years, Gimme! has made waves further up the supply chain. Unprecedented in the coffee industry, Gimme!’s employees unanimously voted to organize a union for its workers in 2017. Teaming up with the Rochester-based Workers United, Gimme!’s union entitles baristas “just cause” protections as well as grievance and arbitration mechanisms and paid sick leave. Cuddeback supports the move: “I’m in solidarity with the organizing baristas’ broader view that the shortest path to a more just and equitable economic system involves workers joining together for strength to advance their agenda.”

For the longest time, Gimme!’s focus was on building a solid customer base with a great product and being an active participant in the community. But as Gimme! has expanded its focus to the needs of its workforce, it was time for a fresh perspective. Cuddeback remains Gimme!’s sole shareholder, but between a shifting focus within the company and a shifting focus in his own personal life, Cuddeback decided late last year it was time for him to step aside as CEO of the company. In January, he was replaced by Colleen Anunu, who previously worked for Fair Trade USA, and subsequently, Cuddeback moved to Washington State. Anunu has made a name for herself in the specialty coffee world addressing discrepancies in the supply chain and sustainability on the production side and the need to bring inclusivity into the retail side. Adds Cuddeback: “I wanted to replace myself with someone I was confident the team would enjoy working with.”

Anunu was born in Rochester, grew up in Fairport, and attended Fairport schools through tenth grade. In 1999, her mother remarried, and Anunu followed her mother to Ithaca. For Anunu, the biggest contrast was Ithaca’s scope: “It’s a much smaller community than the sprawling, metropolitan area of Rochester and its suburbs. There aren’t suburbs here; it’s its own sort of tight-knit community, which is really great.” (For the record Anunu still has family in Greece, East Rochester, and Gananda, and visits the area often.) After high school, Anunu stayed in Ithaca and enrolled at Ithaca College. Initially, she had her sights set on advertising, but after being unable to get into the school’s prestigious communications program, she ended up in a “design your own major” program. Fortuitously, she took courses in Caribbean and South American literature, and the program allowed her to take several courses at Cornell. She graduated with a planned studies degree with a focus on literary theory.

At nineteen, Anunu got her first job as a barista, working at Juna’s at the Ithaca Commons. A year later, she moved onto Stella’s in Collegetown, but after the manager refused to give her a raise, she quit and went to Gimme! in 2004. It was at Gimme! that Anunu began to see coffee as a real career path: “Whereas other coffee shops kind of had this vibe of just your standard coffeehouse where folks came and got their caffeine fix and interacted with one another, the way that many coffeehouses are set up to be social spaces,” she says. “Gimme! had much more focus on product and on coffee being able to deliver a sensory experience.” Anunu worked her way up from barista to store manager to trainer, and in 2008, she took over as director of coffee. Five years later, she was awarded Roast magazine’s “Roaster of the Year.”

During her time as director of coffee, Anunu traveled extensively to coffee-producing countries and forged relationships with farmers. “In the specialty coffee industry, we have such a mantra that because the coffee is high quality and because we pay a premium price for it, coffee production is sustainable,” Anunu says. “Because of my traveling, I really started to question that, and I realized that just because we pay a high price for high-quality coffee, it doesn’t mean that the product is sustainable.” Looking to make coffee more equitable for its producers, Anunu enrolled at Cornell University in 2012 to pursue a master’s degree in international development. Her studies focused on examining the supply chain of coffee to find ways to make coffee production more sustainable to farmers. In 2014, Anunu left Gimme! to finish her degree and was subsequently hired at Fair Trade USA, a non-profit independent certification company. Working as director of supply chain, Anunu developed strategies for certified producers and connected them with buyers like Hugh Jackman’s Laughing Man Coffee who were interested in purchasing certified products.

She describes her role at Fair Trade USA as “consultative,” and over time, Anunu began feeling the urge to move back into the private sector. “I had realized that a lot of the changes that I was hoping to see made [were made] through that investigation and through different consultancies with different roasters. I realized that I wanted to actually see some of these strategies through for myself,” she states.

Cuddeback and Anunu never fell out of touch, and last fall Cuddeback approached Anunu to take over Gimme! “I approached her because I felt she could do the job and that I thought she might like to,” he says. “I believe she has the capacity to think further forward than I do at this point.”

The feeling was mutual. “I had wanted to come back to the private sector and come back to a coffee roasting business in order to implement the strategies I’ve created.” Those strategies included developing inclusive criteria to hire a human resources officer and giving employees a bigger role in interviewing candidates. COVID-19 has put those plans on pause, however.

Another casualty for Gimme! as a result of COVID-19 was the permanent shuttering of Gimme!’s two New York City locations, but they still have wholesale clients in the metropolitan area and hope to open a new location in NYC once the company gets back on its feet. Despite the setbacks, Anunu remains optimistic. “I forsee the company coming through this public health crisis on the other side in a much stronger position.”

And she’s already won people over: “Colleen is handling this with style and grace,” declares Van Grol. “I’m just as excited about being one of their partners now as the day we started serving them. Coffee is about people, and the folks at Gimme! live that motto.”

Erin Scherer wrote about Applehood & Motherpie for the May/June issue. She loves drinking a good cup of Gimme! and lives in Geneva.