It’s been said you should never race a car you wouldn’t push over a cliff. However, as a performance-stage rally driver, I and my codriver Jamie Hayslip find it way too much fun to race along the cliff’s edge at the Susquehannock Trail Performance Rally (STPR) in Wellsboro, Pennsylvania.

Performance rally, more commonly called stage rally, is a race against the clock and the conditions on some of the toughest dirt and gravel roads in the country. STPR is part of the American Rally Association’s nine-event championship series and is arguably one of the fastest events on the schedule. Teams like ours compete in production-based cars on closed public roads alongside some of the world’s best stage rally drivers. Teams work together to drive as fast as they can through special stages, with the quickest drivers taking home the trophies.

There’s a lot of rally history in Rochester. STPR is headquartered in Rochester and has several board members from the area. There are also a bunch of recognizable names among hardcore rally fans from here as well. Dan Thiel was a nationally ranked rally driver in the 1970s and ’80s. Roy and Adrian Hopkins won Targa Newfoundland three years in a row, from 2007 to 2009.  There is plenty of experience to lean on if you want to get started.

This year will be my fourth time driving at this event and second year with Hayslip holding down codriver duties. This will be the first time I build a car from scratch. There is a lot of work to be done before the first stage. I will team up with friends and fabricators to build a 1996 Volkswagen GTI into a fully prepared rally car in less than six months. 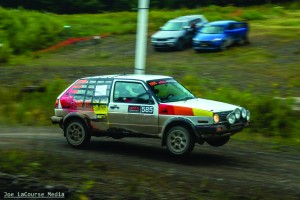 Remember what was said about that cliff earlier? That’s why we are building the new GTI. Last year at STPR, I tried to drive over the cliff on a corner that was too tight for the speed I was going. Luckily a tree stopped us from careening off the road down the cliff. With some help from another competitor, we were pulled back onto the road and completed the rest of the stage and the rest of the rally, albeit with a slightly modified rear quarterpanel and some new air-conditioning, a.k.a.-, a broken window. We finished fourth-in-class and twenty-ninth overall out of forty-nine regional competitors that started the event.

After our excursion into the trees last year, I decided it was time to upgrade to a newer car, better safety equipment, and some more go-fast parts. First step—find the new car. The rally community doesn’t disappoint. Someone somewhere has got what you need and is willing to make a deal to keep you in the rally. A friend from New Hampshire had just the car, a $500 dollar, four-door 1996 Volkswagen Golf GL.

We started by pulling the engine, transmission, suspension, and other rally-specific parts from the old car, as they will drop right into the new one. Prep on the new car starts by tearing out the entire interior to make way for the new, safer roll cage. The roll cage provides the protection for us in case I decide to try and earn the nickname “roofus” by rolling the car over on to the roof.

Once the roll cage is complete, we will divide and conquer the rest of the build tasks. Hayslip and I can handle most of what we need. For some of the other stuff not in our wheelhouse, we turn to our network of local rally enthusiasts. My longtime friend Rich Smith, who got me into rally, helps with most of the random things I forget. Kurt Thiel, a VW rally guru of sorts at Thiel’s Import Automotive and Race Shop in Canandaigua, helps with engine and alignment set-ups. John Frame, owner of Roc-Euro, is one of the tech-savvy new generation of VW enthusiasts I turn to for technology, suspension, and shenanigans for the new build.

Building a rally car from scratch isn’t easy, it doesn’t come quick, and there’s usually more than one bloody knuckle from tightening that last hard-to-reach bolt. What makes it all worthwhile is blasting through the forest at 90 miles per hour past thousands of fans lining the gravel roads. Flying over jumps as fans cheer you on, even though you can’t hear them over the roar of the engine and the notes from the codriver coming through the intercom. It is pressing on regardless after hitting a tree and still finishing. Stories that will last a lifetime.

Unlike NASCAR or Indy Car, rally drivers rarely see the same corner twice. On top of that, they are racing on loose dirt or gravel in the rain, snow, or dusty sunshine. There are also two people in the car. The driver and codriver work together to make pace notes so they can navigate the tricky stages with speed and precision. Stage rally is one of the most demanding motorsports, testing drivers and codrivers as well as their cars over two- or three-day events. I think it is fair to say that they are the best drivers in motorsports. Since I finished STPR last year I can say I am one of them. Now if I could only stop hitting trees.

We have a lot of work ahead of us before debuting the new number 585 Volkswagen GTI at this year’s running of STPR September 18-19 in Wellsboro, Pennsylvania. We will be competing along side the top teams including the factory Subaru team drivers Travis Pastrana and Brandon Semenuk. Wellsboro, PA, is two hours south of Rochester. I consider STPR my home event (and that said, sponsors are welcome). Visit STPR.org for more information on spectating or, better yet, volunteering at this outstanding motorsport event. Visit americanrallyassociation.org to learn more about stage rally.