Are they better together?

I know a lot about dog parks.

In 2013, I formed a citizens group to advocate for a dog park in my Canandaigua community. Canandaigua Canine Campus (CCC) went from a ruff idea to a doggone reality when the park finally opened in November 2018. It has been successfully operating ever since.

Among my earliest cheerleaders were my book club friends. We all had dogs and never got tired of talking about them. I told my girlfriends that if there were a dog park with a wine bar, we’d be all set.

I was joking, of course. Alcohol is normally prohibited in dog parks. Food, too, and for very good reason. Just drop a sausage in a pile of excited dogs to understand the real risks of food aggression. Plus, canine food allergies can trigger serious reactions in some pups. CCC doesn’t permit human food, dog treats, or alcohol.

So, when I recently read that dog park bars are trending across the nation, I was a little shocked. Dog-friendly restaurants are one thing—your pup is leashed and tucked by your feet during a meal—but this new dog park model couples adult beverages and food with roaming off-leash dogs.

I understand the appeal. Everyone, dogs included, gets to socialize. But are humans and canines really better together with food and cocktails?

Rochester resident Joshua Ellis thinks so. In August 2020 he and his wife Desiree Lopez-Ellis opened Better Together Dog Park, Rochester’s first dog park bar. BTDP is an indoor dog park with a bar and snack menu.

Apart from the challenges of opening a new business during a pandemic, it’s going pretty well.

The Better Together story

When Ellis, a collision technician, and Lopez-Ellis, an art teacher, came home after work they released Hoss, their miniature schnauzer, from his crate. He was amped up. If they had social plans in the evening, they had to crate him again, and it made them feel guilty. The couple began to stay home more often and took Hoss to local dog parks to burn off energy.

Ellis started to think about how fun it would be to meet up with friends and bring Hoss along. “Why not have a drink or bite to eat for yourself while letting your dog do what he loves to do?” he reasoned. His wife and friends thought mixing alcohol and dogs in one space was crazy, but after some googling, Ellis discovered there were a few dog park bars already established across the country. This was an actual business model! Plus, they could corner the market: there were no dog park bars in the Rochester area.

So, they did it for Hoss. Well, not the bar part. That part was for them and their friends.

BTDP occupies 3,000 square feet of space at 613 Culver Road. Parking and the entrance are behind the building. Since Ellis and Lopez-Ellis still have their day jobs, they operate the dog park on evenings and weekends as a side business. A dog trainer rents the space when they are closed.

You can buy a day pass or a yearly membership, but either way you must register your dog and provide vaccination records and a spay/neuter certificate for dogs over a year old. Beyond the reception area and check-in counter are two separate double-gated fenced play yards for large or small dogs. These aren’t hard-and-fast rules. Dog owners can decide which area best suits their dog. Temperament and playing style, rather than size, can be an important determining factor for dog park harmony. Massive, magnificent pup portraits created by graffiti artist Range decorate the walls. This is a dog lover hangout.

You purchase beverages and snacks in a separate barroom, but there is additional seating with a view of the dogs. Food is not permitted in the play yards, but drinks are. Nothing is poured in a glass. BTDP serves beer, wine, cider, coffee (much locally sourced), and soda. The fare isn’t fancy: pizza logs, mac and cheese bites, brownies, and a few other items. The couple also plans to partner with nearby restaurants to add takeout and delivery options.

Humans have a restroom, but the park was not constructed for dogs to eliminate inside, so there are occasional accidents to clean up. Even Hoss has mishaps once in a while. Epoxy coated concrete floors with drains and pet-safe disinfectants take care of any odors.

Ellis monitors the dog park and can keep an eye on your pup if you want to grab a bite or drink. Couples or friends can also opt to take turns supervising their own dog. Dogs are never left unattended. 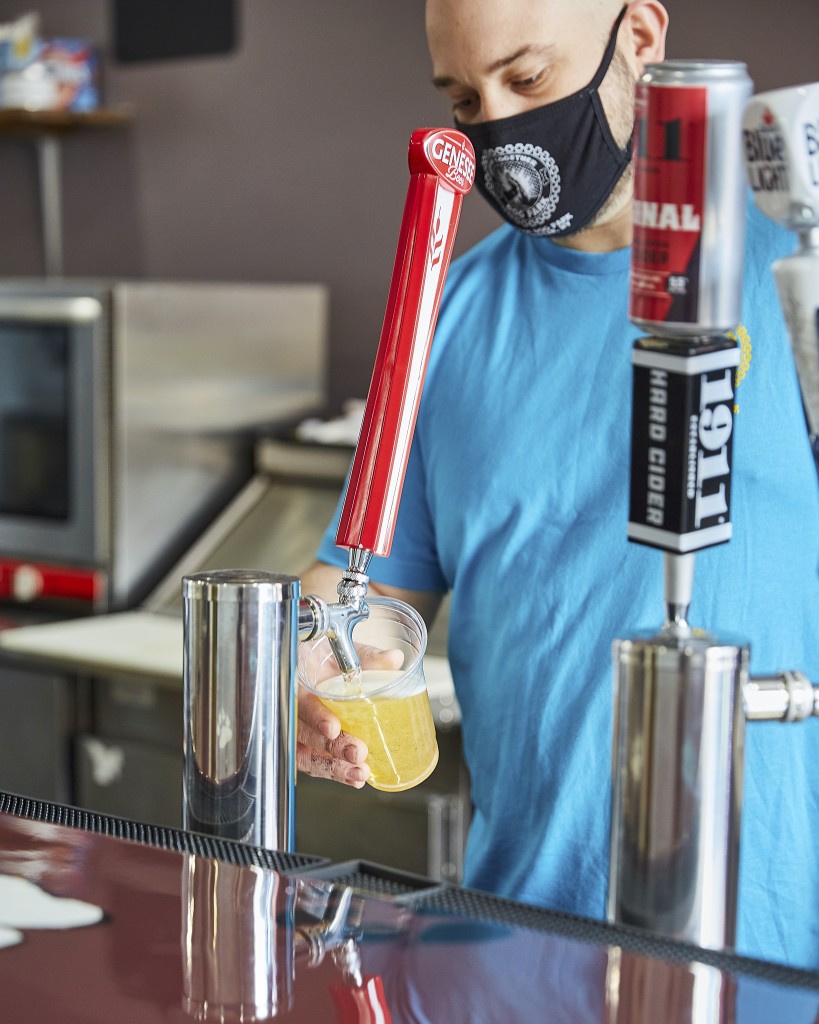 It’s a common misconception that dog parks only benefit dogs. Dog parks also benefit people and communities. Sufficient off-leash exercise and socialization opportunities mitigate nuisance behaviors (digging, barking). Dogs are happier, healthier, and better-behaved canine citizens inside and outside dog parks. In addition to strengthening owner and pet bonds, human connections are also established, resulting in camaraderie between dog lovers of all ages and socioeconomic backgrounds. When residents and neighbors feel connected, it makes the community as a whole a better place to live, work, and play.

Case in point: Ryan Tait, a Better Together regular. This past year Tait lost his mother and grandmother within two weeks of each other. “I think that the dog park and the relationships I’ve made because of the dog park have been incredibly helpful for my grieving process and my own mental health,” he says.

Tait and his girlfriend, Breanna Schultz, bring their three small dogs to BTDP two or three times a week and stay about two hours. Tait isn’t a barfly—he doesn’t even drink alcohol—but they have ordered food, taking turns with their pups. “If I was there alone, I’d have no problem asking another owner or even Desi or Josh if they’d be okay to watch our dogs,” says Tait. “As we tend to come around the same times, we’ve come to know the other regulars and would feel comfortable leaving our dogs with them.”

Chad Flint and his wife, Jessica Malinowski, live right down the street from BTDP and visit at least once a week with Barnaby, their black Lab. “Barnaby loves it, and my wife loves that she can have some wine while he plays,” says Flint. They both enjoy their drinks in the play yard or take turns watching Barnaby if they grab some grub. The couple meets up with friends and has made new friends, too. Barnaby always finds fun pup pals to wrestle, chase, or play tug of war with.

Flint invited his friend Lindsay Tolley of Farmington to bring her friendly Newfoundland dog Nala to BTDG for a playdate with Barnaby. One of the perks of an indoor dog park is sidestepping the mercurial Rochester weather and resultant muddy paws.  “It was a rainy day, so I went to help Nala get rid of some energy,” says Tolley.

They stayed about ninety minutes. “Nala played well with all the other dogs. I felt like all the dogs played pretty well together,” says Tolley. Flint has never witnessed any fighting incidents. “Everyone is great, and I have seen much less problems than at a playground with kids,” he says.

Tolley toyed with the idea of getting a drink but didn’t think Nala would feel comfortable without her in the play yard. I have a clingy Newfoundland, too … so I get that. 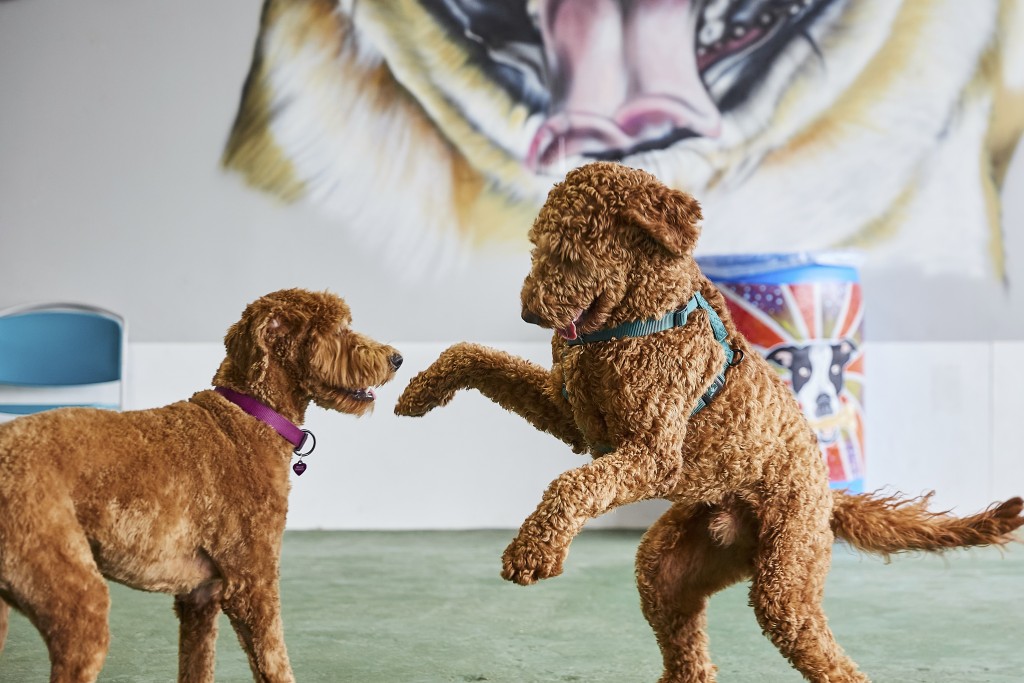 The experts weigh in

It turns out that dogs elicit a similar response.

“Pets are often referred to as social lubricants as they can create opportunities for spontaneous social interactions between people who have just met or may otherwise not seek each other out,” says Patricia Pendry, PhD, whose research at Washington State University focuses on human and animal interactions.

That’s a positive spin on mixing cocktails and canines, but I wanted to check in with Susyn Stecchi, a national dog park consultant. Stecchi, with more than twenty-five years of experience, authored the book So You Want to Build a Dog Park: A Comprehensive Guide for Municipalities and Private Entities.

“Dog park bars and restaurants are an exciting and growing trend,” says Stecchi. “They first started with local neighborhood bars adding simple enclosures to allow guests with dogs to enjoy a beer, conversation with neighbors, and dogs mingling all around them.” Her first experience was a visit to a dog bar in Charlotte, North Carolina. Drinking customers and their dogs socialized all in one space. Although high-top seating and counters kept food out of reach, it is not an ideal configuration from a safety standpoint.

Stecchi advises that proper design such as keeping eating areas completely separate from dog areas but allowing owners to easily observe their pups is the key to minimizing risk to dogs and people. Having double-gated doggie airlocks for leashing and unleashing dogs and human monitors stationed in the play yards is also important. At Bark Social in Bethesda, Maryland, the monitors are called Bark Rangers. At Better Together, they call him Joshua!

Most BTDP customers are from the Rochester area, although visitors come from surrounding suburbs and as far away as Syracuse and Buffalo. In May, Barkology, a new dog park bar with indoor and outdoor play areas opened in Buffalo.

It appears that this underdog business model is moving rapidly into top dog category.