In the beginning, it was Ian Wilson and an idea. For him it was simple, he wanted to bring the types of murals he had seen in other world-class cities to Rochester, with the intention of using that art to engage and transform the community.

So, as (585) reported in 2013, he tapped into his network of talented friends and approached them to bring the idea to life in what he called a Visual Intervention. He reminisced about growing up in New York City as a teen during the height of the street art era and being able to see the newly tagged train cars by street artists from his house daily and how that made him feel. He wanted to bring that energy to the project.

“I wanted the city landscape to look one way on a Friday and then on Monday for people to wake up and it looked different,” says Wilson. “There wasn’t a whole lot of publicity around it and definitely no social media promotion, because I didn’t know how to do that anyway.”

That first set of murals in the public market and on Troup Street in 2011 came together in a serendipitous way when he invited a group of artists from South Africa to Rochester to work with some local artists. When it was over and the walls were complete, there was a level of curiosity, as well as appreciation, for the work, and Wilson knew he was on to something.

By 2012, that idea morphed into WALL\ THERAPY and had become a weeklong festival. It allowed for bigger installations in a slightly more relaxed time frame and created a better experience for the artists. It also allowed for more programming and more community engagement.

“It was important to me to start WALL\ THERAPY because I wanted to convey a message to the people who live within the city,” says Wilson. “It all starts with a belief that change is possible, that’s why the first mural was called Believe because the objective was to get the citizens of the city to believe in a future that was better than the present.”

This year marks WALL\THERAPY’s tenth anniversary in its current format. Over the last decade, they’ve hosted dozens of artists, many of whom have left as unofficial ambassadors for Rochester, helping spread a positive message about their experience here. After spending a week in the city, many artists have felt a connection to it, the people, and its success.That’s the power of public art. It adds to the aesthetic and culture of a community and can brighten a neighborhood, inspire and educate its residents, and raise awareness. It also fosters lasting relationships and can have this larger impact that Wilson was aiming for. This year is also a return to that weeklong festival format, the first year they’ve gone full bore since 2018. In 2019, they put on a scaled-back program focused on partnership projects and completed three walls over that season. In 2020, amid a pandemic, they provided mini grants to ten local artists. By 2021, with hopes of a full festival, they decided instead to go smaller and welcomed back two alumni over Labor Day weekend to add murals on Greenleaf Street.

They’ve already kicked off this season with murals by local artists at the Roc City Skatepark in May, with programming continuing July 23 through 31. The summer roster includes half alumni artists, and the other half of the artists are new to the Rochester experience. They’re also welcoming back internationally renowned photographer Martha Cooper, who documented their 2012 and 2013 festival. They will be screening a documentary about her life and career (Martha: Picture Story) at the Little Theatre with a Q&A session to follow. There will be some on-site workshops at several walls during mural installation as well as a few other goodies that they’ll be announcing closer to the festival. 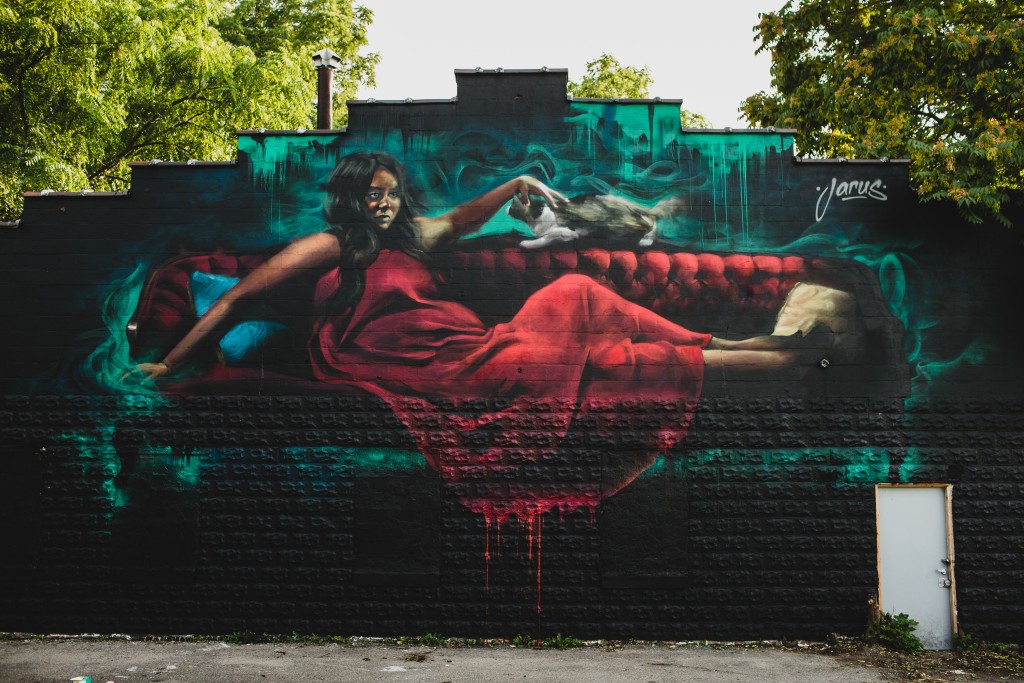 The Red Dress by Jarus, on Seward Street; photo by Tomas Flint

Wilson is quick to share that WALL\ THERAPY has been successful throughout the years because of the people who power it: a team of volunteers that are working tirelessly behind the scenes. He says there’s no way they would have been able to do as many murals as they’ve done, host as many guests as

they have, produce as many videos and other content without their team.

“The most successful companies are powered by good people, and WALL\THERAPY is no different,” says Wilson.

One of those key players is Erich Lehman. In 2012 he signed on to help with branding, set up a website, and help with social media. By the end of Lehman’s first festival week with WALL\THERAPY,Wilson asked him to be a cocurator and the lead organizer, and the rest is history. It just made sense. It was clear that they were kindred spirits when they met in the fall of 2011 and became fast friends.

“We both had been told that we had to meet each other,” says Lehman. “When we finally did one afternoon at the Yards, it was like we’d known each other for years, talking for an hour plus nonstop.”

Lehman says the core team and volunteers pour their heart and soul into the yearly festival and their other programming because they care so much about it and the work, the artists, and Rochester. He also credits the grassroots support from the community as part of what has fueled their success.

“If people weren’t responding to it positively or in the ways that we hoped, then I have to imagine it wouldn’t have lasted as long as it has,” says Lehman. “We take a lot of pride in creating a heartfelt, positive experience for everyone involved, from the artists each year to the community members who help or just stop by to take in the work.”

When it started in 2012, WALL\THERAPY was one of the earliest mural festivals in the United States and according to Wilson provided some of those early templates for a producer project of its scale, so the impact of WALL\THERAPY can be looked at in a couple of different ways.

“WALL\THERAPY has no doubt led to the launch of other mural initiatives in the city, but I think it would have been inevitable for something like WALL\THERAPY to happen given the state of muralism in today’s world,” says Wilson.“It just happened that we took that significant risk when we did.”

Lehman adds that he thinks WALL\THERAPY was a kicking off point to a renaissance of public mural art in the city.

“While we already had a vibrant graffiti scene, our project alone has added over 136 [and counting] murals to the city,” says Lehman.“And many of our local alumni have launched their own mural projects, as well as artists who took the leap and added their artwork to the visual landscape on their own.”

During its ten-year run, WALL\THERAPY has complemented what already existed in street art and has added to the fabric of Rochester’s art community.

Lehman says he sees how fans of the project have learned about their city by traveling around to the various mural locations. Fans are learning about the community, talking to their neighbors, seeing how small our city really is, and realizing that there’s so much we still need to care about.

“Our original core mission has always been about inspiring people—to believe, to care, to question, to wonder, to express themselves— and I feel that’s still at the heart of what we do,” says Lehman.

“It’s also something for other people to decide really how much WALL\THERAPY has had an impact on this city or on this environment,”Wilson adds.“That’s something for people who have experienced the project to answer for themselves.”