Be bold. Be gritty.

​​​​David Paul’s most important conversations always include a cup of coffee.

These days, those cups are filled with a good pour-over, no cream or sugar. Preferably, it’s a blend from East Africa he knows well—his own Bold & Gritty Ethiopia Guji.

The Michigan native, who moved to Rochester in 2010, says that his journey with coffee started when he was a medical student.

“What began as a way to stay awake during long nights studying morphed into an obsession with all things coffee,” Paul says. “Naturally, when I was looking for a creative way to tell inspiring stories, I didn’t have to look much further than my cup of coffee.”

When Paul—who now spends his days and nights as a senior neurosurgery resident and neuro critical care fellow at the University of Rochester’s Strong Memorial Hospital—launched Bold & Gritty in 2020, the stories he wanted to tell centered around Black men who had beaten the odds to achieve their wildest dreams. The goal was to normalize their success. Paul knew that these stories needed an audience, and he would find that audience around something familiar: coffee.

“It helps us to amplify the voices of a group of people whose contributions, both in and outside of coffee, have largely been ignored,” Paul says. “Coffee has always been about Black people—we’re just using coffee as the means to bring the conversations around that cup full circle.”

As COVID took hold in 2020, and in the midst of a reckoning sparked largely by racial injustices and police brutality, Paul started to question what kind of legacy he wanted to leave behind for his three-year-old son. So, he decided to share stories that inspire him in a place that would catch people’s eye—on his bags of coffee.

As Bold & Gritty would take shape, he knew the power that passing stories down from one generation to the next could wield. It was the tales of his maternal grandfather’s entrepreneurial work that had always fascinated him growing up. While he wasn’t born yet during the height of his grandfather’s business, Brown Weld Service, a company that supplied auto parts to General Motors and Ford, he had heard the accounts from those glory days. Paul was inspired by the qualities he had continued to see in his grandfather after he entered the ministry—hard work, dedication, and an unwavering moral compass. Paul was very intentional about the Black narratives that would be told by the brand on each bag of their coffee. Chronicles like his grandfather’s are what he wanted to elevate.

“It started with featuring a close group of friends and has expanded to featuring some awesome people from around the country,” Paul explains. “Not every Black story worth being told should end with staring down the barrel of a gun or the net of a basketball hoop.”

Those who have been featured on different blends of the coffee are actively making an impact in their community through their work in nonprofits, community activism, entrepreneurship, or outreach. Paul wanted to not only inspire his own son but also reach a generation of young men trying to figure out what they are capable of.

“It’s my version of social entrepreneurship,” Paul says. “The proceeds help us tell more stories and raise awareness around issues that we care deeply about.”

One cause that resonates with Paul is mental health, especially of Black and Brown men. At the end of 2021, Bold & Gritty partnered with the National Alliance on Mental Illness in Rochester to create a specialty coffee blend with proceeds supporting therapy and other services for those men.

“We often treat mental illness as something that you just have to overcome.We don’t talk about it, nor do we seek the kinds of help that we need,” Paul says. “We need to talk openly about our emotions and struggles and encourage our brothers and sisters to seek help, and we need to advocate for ourselves when we do seek help.” 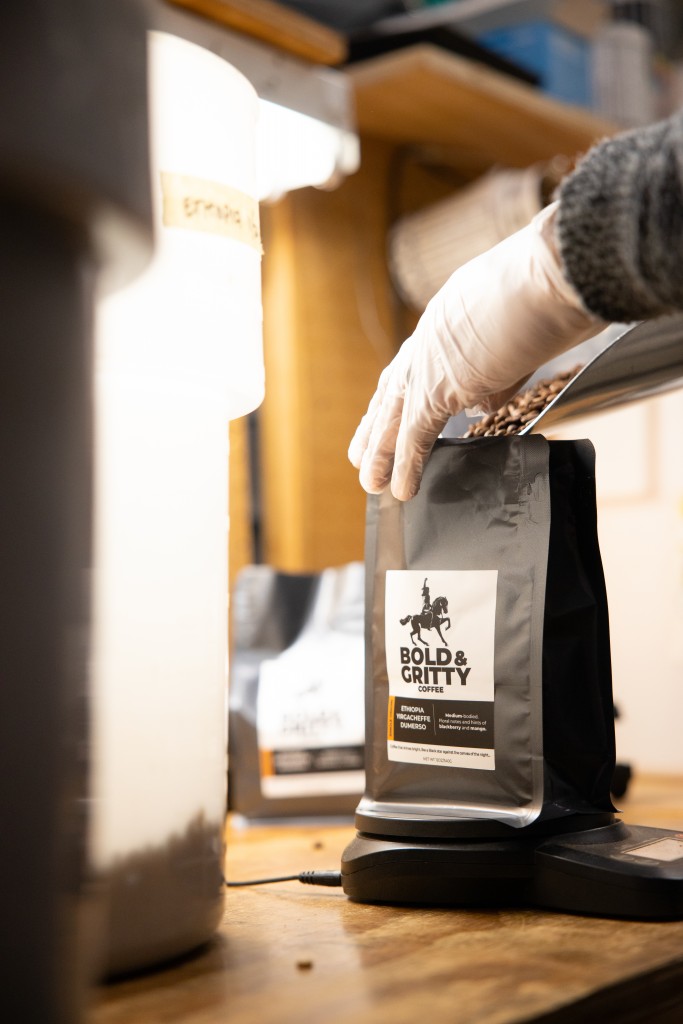 Dream it. Build it. Grow it.

La’ren Launchie-Paul, cofounder and Paul’s wife of nine years, and John Cannon make up the team behind Bold & Gritty.

The small team relies on partnerships to reach the market, and New City Café & Roastery is their biggest.

“We work closely with them, from collaborating on production roasting to providing café and barista training to their staff,” Paul explains.

Bold & Gritty roasts in collaboration with New City at Imprint Roasting in Sodus. Paul says they’ve also been fortunate to develop a great relationship at Mizar Coffee that allows them to source green coffee beans directly from Ethiopian coffee farmers. As a team, they build out the roast profiles and spend a lot of time cupping—a tasting technique where they check and rate the quality of a batch of coffee. Once a decision is made, Nick Trombley of New City takes this information and leads the production roasting for Bold & Gritty.

For Paul, what makes the partnership extra special is New City’s commitment to rebuilding the Beechwood neighborhood and its emphasis on hiring teens from the community, all of which aligns with Bold & Gritty’s mission.

“This is more than just coffee and storytelling, but community impact,” he says.

Bold & Gritty’s success has been largely driven by creating meaningful partnerships, raising awareness, and making space to celebrate Black men, who Paul believes are some of the grittiest people to ever walk the earth, from early cowboys and pioneers to doctors, engineers, and creatives. So, when a neurosurgeon—someone in tune with our brain, spine, and connecting nerves—decides he’s going to start a coffee line, you know it’s going to be good, but as he will remind you, coffee is only part of his mission.

“I want to model what it looks like to pay it forward and inspire the next generation to reach their goals,” Paul says, “and coffee is the vehicle.” For more, visit boldandgritty.com.