All in the family

He may have “retired” in 1996, but Bill Mapstone still comes into the offices of Crosman’s Seed Company at 511 West Commercial Street in East Rochester just about every day. So does his wife, Justine, to help their two sons, William and Craig. Together, the family runs the now 182-year-old company, still thriving via sales of its highly regarded lawn, flower, and vegetable seeds and the large number of landscapers who depend on Crosman’s for the company’s special mixes of lawn seed. In fact, from the time Charles Frederick Crosman founded it in 1838, the business has been a family-run company. When Charles died in 1866, the business passed to his sons Charles W. and George F. Crosman, then aged 20 and 17, respectively, who went on to thoroughly organize the business and expand its operations with seed beds throughout the Rochester area and in Canada and Michigan.

The Crosmans used their seedbeds as testing grounds. By distributing large quantities of choice seed varieties to farmers in Monroe County in exchange for a part of the crop, they developed hardy and highly acclaimed seeds. The business continued to expand after wholesale and retail outlets opened in the City of Rochester, and, by 1880, Crosman’s Seeds was one of the biggest seed houses in the world. Initially located at 346 East Main Street, its first headquarters became 905 Monroe Avenue in Rochester, a three-story brick structure that is one of the oldest buildings of its kind in the United States. Today it’s home to the Center for Youth, while Crosman Seed Company is now located in East Rochester, where it’s been since 1927.

Mapstone ownership dates back to 1928

Bill Mapstone’s father, Herbert, worked with the Crosman family and acquired ownership of the company by 1928. He bought the buildings of Crosman’s current long-time location from Kate Gleason, who had used them for the manufacturing of Northfield trailer cars until another competitor put her out of business. (Gleason is well known as the first woman to study engineering at Cornell University, and her father started the gear-cutting company called Gleason Works. She was also behind the complex of fifty-five concrete houses built between 1919 and 1925 in East Rochester, the Concrest Development, designed to provide affordable housing for working-class people.) When Herbert died in 1979, his son Bill Mapstone became president of the company, which is where he also met his wife, Justine. “I came to Crosman’s in 1966 for a summer job while I was in college and ended up marrying the boss’s son,” says Justine with a smile. Both Bill and Justine grew up in East Rochester. For years they lived on Canandaigua Lake but moved back to East Rochester thirteen years ago, which makes it easy for them to come in to Crosman’s each day.

The two work closely together with their sons William and Craig. While Bill handles all kinds of special projects for customers, their two sons are the current operational directors, with William primarily handling the lawn seed business. Justine takes care of all the office and billing details, serving as office manager. Her favorite sweatshirt proclaims: “Office manager because freakin’ miracle worker isn’t a title.”

“I make things happen, because I basically know where everything is,” she says. Clearly, Justine is the glue of the family’s operation.

The Mapstones previously employed some non-family members who have since retired—one of whom was ninety years old when she left her job. But these days it’s just the family of four running the business, which has changed over the years in terms of distribution channels and what they sell.

Seed business evolved with the times

During the Great Depression, the company supplied seeds at reasonable prices and donated seeds for area Victory Gardens during World War II. Following the war, the company developed eight mixtures of lawn seeds for retail sale, which remain the basis of their seed mixtures today. While Bill’s father was the owner, the company also directed its interests and sales to wholesale packet production and supplied national chain stores. These days their biggest business is in lawn seed, fertilizer, and lawn care. Their Town & Country mix is the most popular lawn seed mix.

“We had to get smaller and consolidate the business some more,” says Justine. “The bulk of our business is contractors who work on major roadways. Subcontractors like the guys who work with Rochester Gas and Electric and the University of Rochester come in, and each has their own special mix of lawn seed they like to use.”

Homeowners also come in for Crosman’s lawn products, and most of that business arrives through word of mouth. Although Justine mentions one customer who told her, “I don’t tell my neighbors I come here. I want the best lawn in the neighborhood!” Crosman’s is well known for providing advice to their customers, and the Mapstones enjoy educating people about lawncare and growing flowers and vegetables. Justine takes school and other groups through the facility, which includes a big warehouse, on tours. 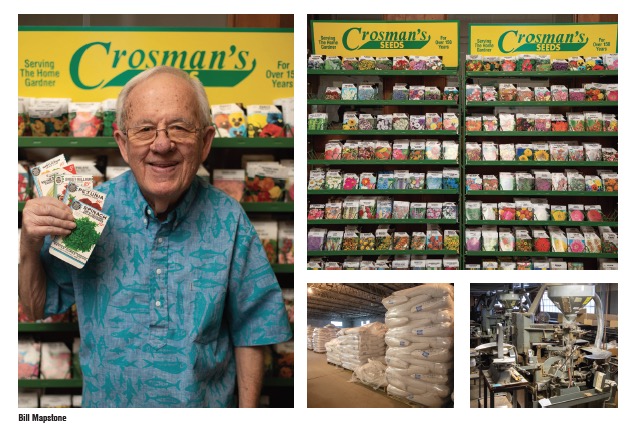 Now mixing old with the new

The office area has high ceilings and is filled with boxes of seed packets together with wooden cabinetry from the 1920s and several computer screens. The walls feature photos that highlight the history of the company, which Bill mentions has been documented with a display at the Smithsonian Institute.

But Crosman’s Seeds has also mastered mixing tradition with today’s trends. More recently, the company has developed a health and wellness division spearheaded by William’s wife, Diedre, who is interested in holistic products and therapies—and in diffuser-produced scents provided by essential oils, versus the lingering fragrance of seed and fertilizer mixed with old building. The division includes partnerships with other companies, including HempWorx CBD Products, doTerra Essential Oils, and the Reikery.

Working for a living—and time off

The company is truly a family affair, but not one to seek attention, says Bill. “We’re reclusive people. We just want enough business so that we can take some time off.”

“Most people watch TV and drink beer after they retire,” he jokes. “I like popping in here most days.”

Sally Dixon is a freelance writer from Webster who especially enjoys working with health and human service clients.