If you’ve never heard the word “hollerhorn” before, that’s because the folks behind the farm-to-distillery about an hour south of Rochester made it up. It’s a combination of “holler” and “horn,” and they define it as “an instrument used to herald or heed.”

From spirits to experience, normalcy isn’t the goal at Hollerhorn Distilling. Even the heading on their “About” page has a message you don’t often see on an industry website: “Dreamers Attracting Dreamers.” 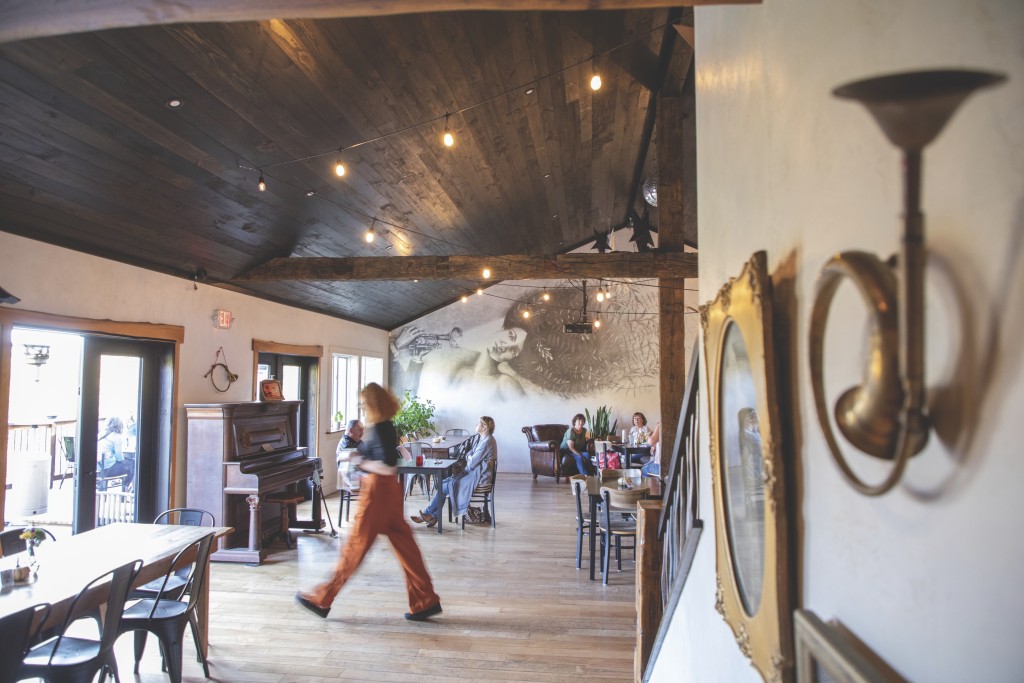 The interior of Hollerhorn Distilling, featuring the “Mother Apparatus” drawing

One visit to the Naples destination confirms it. A bright energy flows through the entire space, from friendly employees who greet visitors and instruct COVID-19-friendly procedures (they keep your credit card for the visit for contactless food, drink, and merchandise purchases) to the airy, woodland-themed decor. The showstopper of the space is a two-story mural on one wall of the tasting room: the “Mother Apparatus” drawing, as they refer to it. It’s a gripping, whimsical image of a dark-haired woman leaning her head to the side as her hair, full of leaves, is swept behind her from the force of a—what else?—hollerhorn.

Owners Karl and Melissa Neubauer (who drew the aforementioned wall scene by hand) are Naples natives who wanted to bring a big city feel to the sleepy Finger Lakes town, year-round. Hollerhorn opened in 2018, just off Country Road 36 in the small, grape-growing town of Naples. High-quality cuisine, house made spirits, events, and live music were all on the docket, with the hope it would become a destination for guests from surrounding towns and cities—especially given the close proximity to skiing and leaf peeping in colder months (spoiler: it did).

While COVID protocols have changed some of the layout and entertainment options indefinitely, the upper and lower dining rooms at Hollerhorn are socially distanced to allow for indoor meals, while a spacious outdoor porch with lounge seating and heaters accommodates outdoor dining (as of this publication, it was unclear how long on-premise dining would remain available).

First on our visit agenda were the in-house spirit offerings. It made sense to get cocktails, of course, but also to try the spirits on their own. Karl Neubauer is the head distiller, and he’s been perfecting his technique for more than a decade. He has a few different options, but his inspiration (and ingredient list) is local: spirits distilled from Finger Lakes maple syrup. There’s also a collaborative gin made with Black Button Distilling in Rochester, an occasional grappa made with local wine harvest castoffs, and several other limited-edition spirits, ranging from brandy to rye. 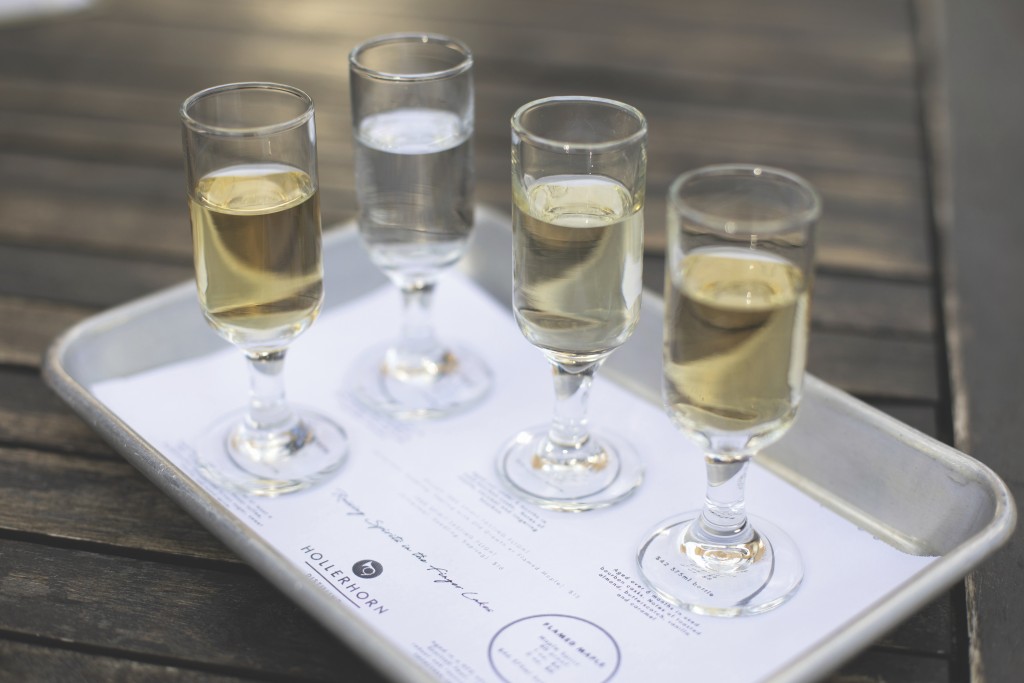 My table selected the “Baller Tree Spirit Flight,” which included tastes of Silverleaf, Seedling, Sapling, and Old Growth (the last being a newer spirit to the collection). While the process for each is different, Neubauer’s goal is to bring out smoky, tequila- and Scotch-like qualities in the spirits—fans of those liquors will be quite pleased. And at eighty to 100 proof per spirit, a flight will leave you feeling buzzed and ready for a meal (oh, and another cocktail) before heading anywhere else.

Next up was the “14512” cocktail (a hat tip to the Naples zip code) incorporating the Seedling spirit, which is aged in used bourbon barrel casks for less than six months. Added to that is Sazerac rye whiskey, local Wohlschlegel’s maple syrup, lemon juice, and walnut bitters. It’s a dry, strong cocktail that was a nice follow-up to the tasting flight. We also ordered the Naples Mule, which adds Concord grape juice to a Moscow Mule for a fun color and sweeter taste. The craft cocktail menu rotates seasonally, but it always contains Hollerhorn base spirits peppered into creative takes on classic drinks.

The food menu is thoughtful and varied, but folks ’round this region will always favor their carbs and proteins, so the burger is unsurprisingly the best-selling dish. We skipped that in favor of some more adventurous dishes. The Ploughman/Die Plfuger came out first, a fully loaded board of charcuterie, marinated cheese curds, pickled veg, and a loaf of pillowy, seeded bread. The name for this menu item comes from Ploughman’s Lunch, an English tradition of a cold, midday meal consisting of cheese, bread, onions, pickles, and sometimes meat or a hard-boiled egg. (It’s thought to be the inspiration for modern-day cheese and charcuterie boards, so obviously we are very grateful to all ploughmen for this discovery.) 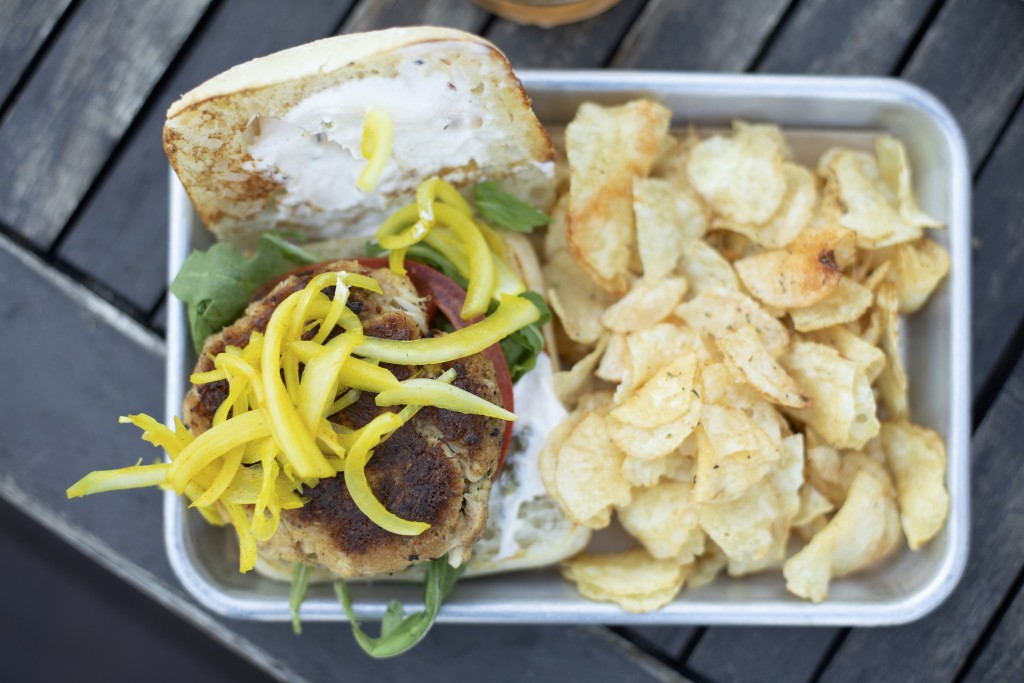 For the remainder of the meal, we sampled the Potatoes Tostones, Pulled Jerk pork, and the crab cake sandwich. Each one was flavorful and creative, with the crispy, smashed potatoes being the highlight. The crab cake sandwich was a nice surprise, as well-executed seafood dishes are often hard to find in this region. The crab was tender, and the buttery roll and sour slaw perfect complements. The pulled pork serving was so large that we barely dented it; the open-face style of the dish made for a mountain you needed a fork to conquer. (While the menu does rotate, there’s usually some variation on these kinds of dishes available.) 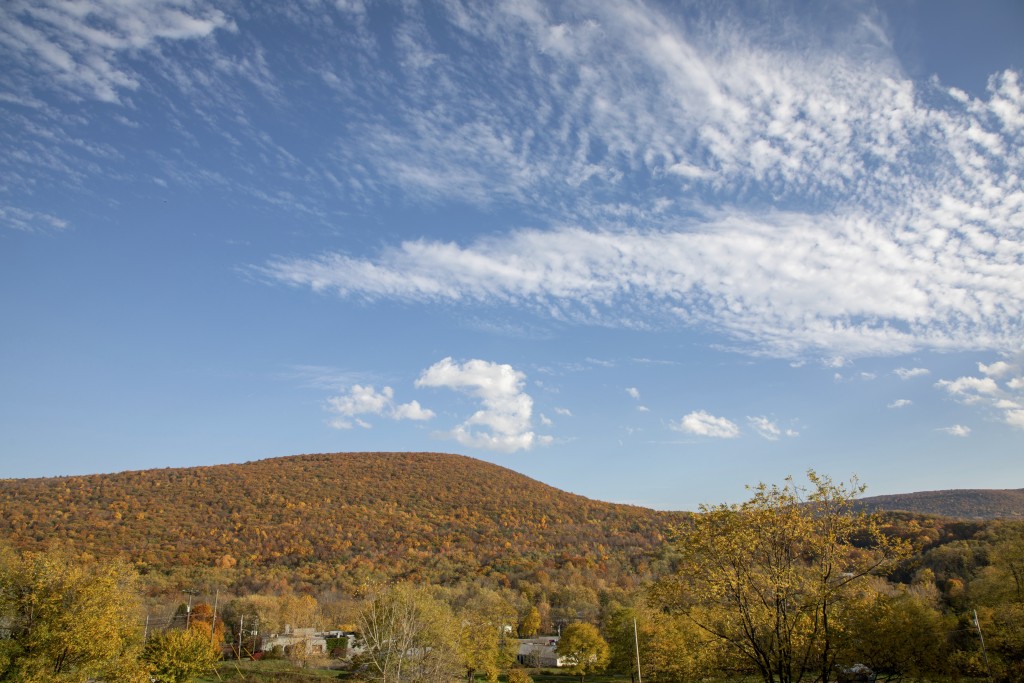 The view from Hollerhorn Distilling

The service at Hollerhorn was superb, even on a busy weekend in the fall when every table was fully booked. A table outside allowed us to leaf peep from the upper deck of the Hollerhorn building, looking out over a pond and across the vista to rolling Finger Lakes hills. Karl Neubauer himself even popped out to say hello and give some insight on the spirits, as he’s often around the premises.

Hollerhorn, as it promises, does attract dreamers. Even if that dream is as simple as a good meal and a nice drive into the Finger Lakes on a Sunday. And as an up-and-coming generation of spenders leans more toward experiences over material goods, this still-undiscovered spirits, concert, and dining venue is poised for even greater success, especially once COVID is a distant memory.