A rare transformation for Char

“We’re going to get a little wild tonight,” I warned our server, Mark.

“Let’s start with the shrimp cocktail, then the wedge salad, a side of the asparagus, and for our main, we’d like the cowboy ribeye, medium rare, please. We’ll see how we feel after that.”

I couldn’t remember the last time I ordered a twenty-seven-ounce steak. That much angus beef felt excessive—or even politically incorrect. I reasoned that it was for two people, plus my husband and I hadn’t been on a true vacation since January. This was justified.

Chophouses tend to remind me of going out to dinner with my mom and stepdad when they’re in town. The food is so predictable that one almost doesn’t need a menu to order: Beef, in various cuts; salad, your choice of green, caesar, or wedge; sides, laden with butter and cream; and wine, bold and spicy reds, likely from California or Italy. To me, it’s too rich for a spontaneous Friday night. But once or twice a year, why not?

This brought me to Char Steak and Lounge in the Strathallan Hotel. I hadn’t seen my family in God-knows-when, and, strangely, I was in the mood for something a little over the top. The kind of meal where you forget about the prices on the menu and pretend like someone else is footing the bill.

I had also heard that DMC Management, the team behind Good Luck, Cure, Lucky’s, and the Jackrabbit Club, took over the food and beverage operations in June, and I was curious to see what all the fuss was about. 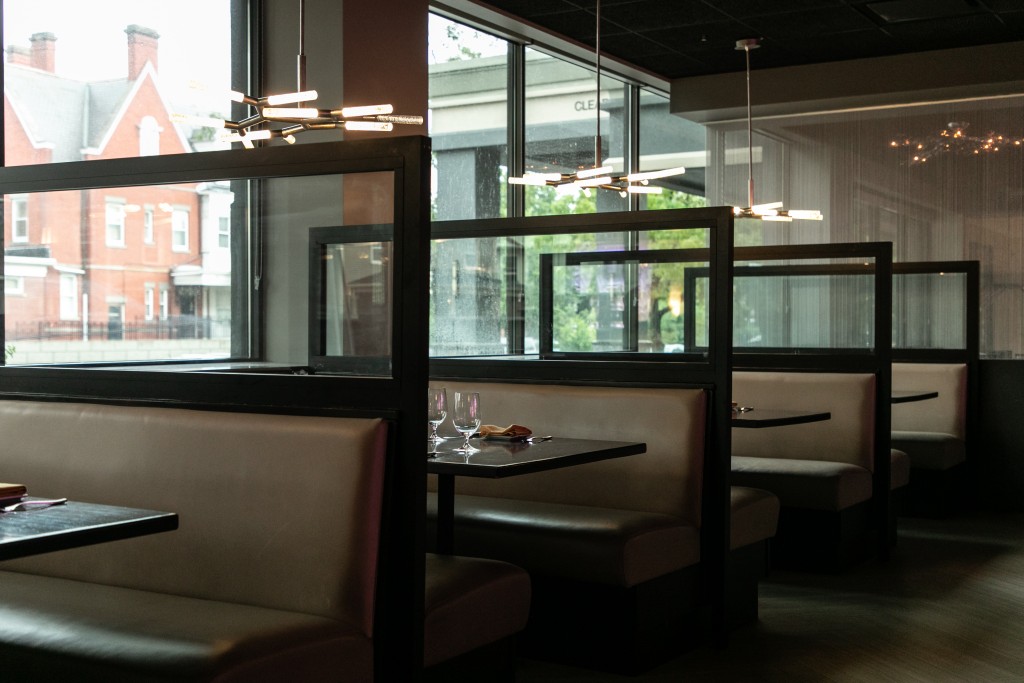 Fundamentally, the space’s ultra-modern interior is the same. Soft purple light still glows onto the restaurant’s glossy bar, and a sheer metal curtain obscures the intimate dining room from the view of the hotel lobby.

This was my first time eating at Char, so I can’t speak to what it was like before. But Chuck Cerankosky, one of the founders of DMC Management, confirmed the restaurant is undergoing a slow, gradual change rather than a grand reopening.

“We had to hit the ground running,” he says, explaining the team didn’t close or miss a day of service when the new management came in. Unlike most stand-alone restaurants, Char acts as an amenity of the hotel and is open seven days a week, including for breakfast.

Additionally, the management group now handles the food and beverage operations of Hattie’s, the Century Club, and all of the banquet services there. “That’s the fun of the project,” Cerankosky says. “We feel honored to be at the helm and at the next chapter of this legacy.”

While the team has its hands full during this transition, one of the differences regulars might notice is the menu. While the menu’s heavy steak and seafood influence will remain the same, the new chef, Ryan Donalty, who started weeks before the transition, embellishes the chophouse classics with a few newfangled touches. 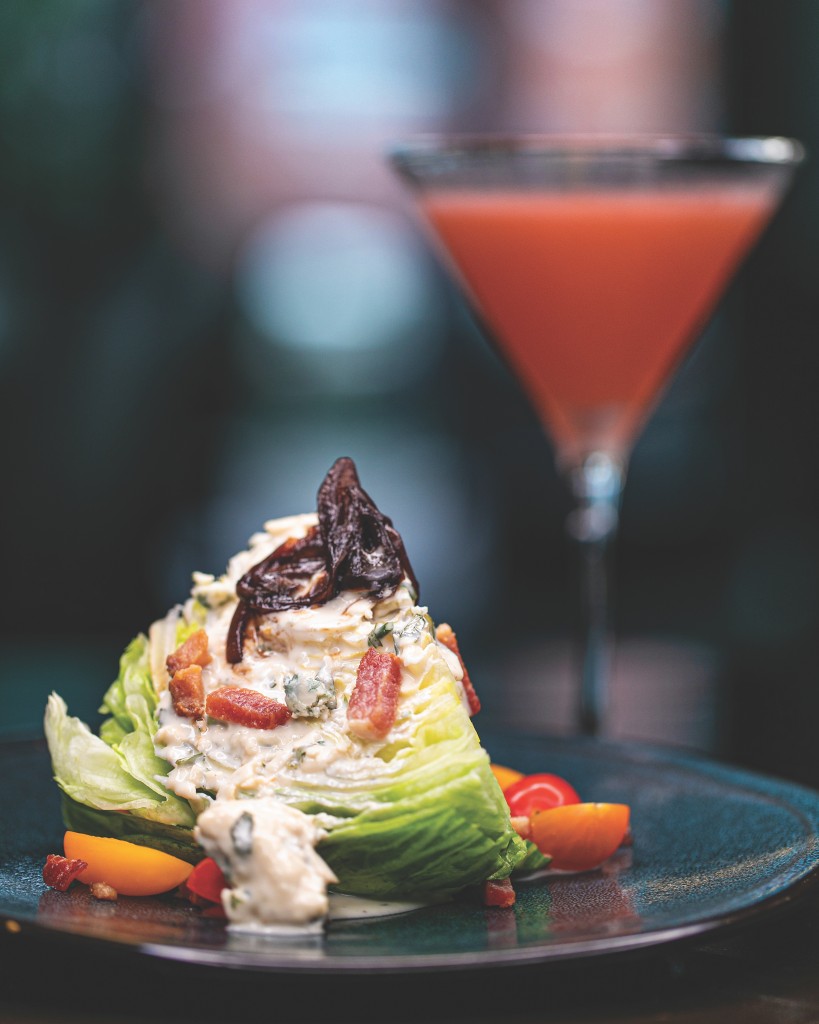 Take, for example, my wedge salad ($15): Donalty heightens the best parts of this retro starter. Its creamy blue cheese dressing is now a bit smokey; crunchy bacon bits, now thick, toothsome slices; and the pièce de résistance, the standard chopped red onion, instead is a jammy caramelized balsamic onion condiment that gives every bite the acidity that the salad needs.

Like at Good Luck, Bar Bantam, and Cure, the team is looking at ways local farmers and regional foodways can inspire the menu. “We’re excited about this concept because it’s meant to be a steakhouse,” Cerankosky says. “No matter what we do, you’re going to see steaks, sides, and sauces.” In the coming months, the team hopes to add some Miami influence and incorporate more raw fish items.

DMC Management plans to use its award-winning bar programs to elevate the bar menu. Already, its influence on the cocktail list is clear. It has curated drinks with cheeky names like Char Diablo and Absinthe Minded—which are pretty good, by the way.

With a name like Char, the team has tastefully taken advantage of its pun opportunities. That side of asparagus ($10) that I mentioned earlier was charred, well, more appropriately, lightly grilled on a charcoal oven. And I was thrilled that it was simply dressed with cranberries and shavings of asiago cheese. It was a delightful improvement from the saucy, buttery vegetables I’m more used to seeing at steakhouses.

However, for those looking to indulge, this restaurant still has a lot to offer. Here, mashed potatoes ($10) get gussied up with a helping of Boursin cheese and double cream. The menu also has risotto ($12) and macaroni and cheese sides that change daily. I heard tell of the lobster mac and cheese, but it was already gone by the time I came in. 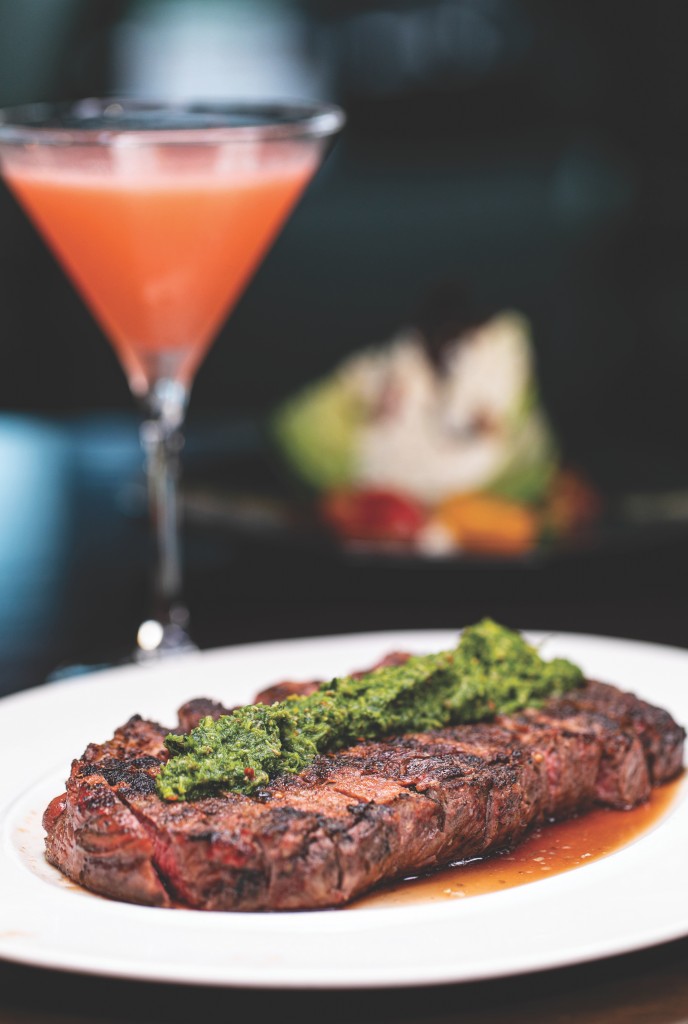 The Delmonico Steak with chimichurri

Like at the old Char, the steaks range from petite, eight-ounce filet mignon ($44) to hefty bone-in chops. At the press time, the biggest available was the twenty-seven-ounce cowboy ribeye ($69). While it isn’t quite as dramatic as the thirty-two-ounce porterhouse that used to be on the menu, it’s still a massive portion.

Steaks are cooked on a wood fire, then finished with butter in a 900-degree charcoal oven. Each comes with a sauce of the diner’s choosing, which range from classic bordelaise and au poivre with peppercorns and brandy cream to the restaurant’s signature steak sauce and bacon-blue cheese butter served melted on top of the steak.

Since we were sharing the ribeye, we asked for it to be cut off the bone. This flourish always reminds me of dinners in New York City. The steak came out with a well-browned sear and deeply blushed interior almost all the way through. We went with the chimichurri, and the herbaceousness of the sauce pleasantly tied together my bites of steak and asparagus.

Pleased with how we didn’t order so much that we felt stuffed, we opted to try two desserts—the olive oil cake ($10) and the profiteroles ($13)—because we couldn’t decide. But even those, thanks to the culinary genius of pastry chef Rachel Patall-David, didn’t do us in. The olive oil cake, served with a refreshing scoop of ginger ice cream and a drizzle of rhubarb sauce, was extraordinarily light, and the portion size was ideal for finishing an otherwise heavy meal.

For those looking to end with a bang, get the profiteroles stuffed with pistachio ice cream. Smothered in chocolate sauce and candied pistachios, they’re like saucy, bite-sized ice cream sandwiches, and they’re a lot of fun to eat.

Pricewise, we did get a bit wild. Sixty-nine dollars is more than I tend to spend on an entree pretty much anywhere, and it’s a steep sum compared to other special-occasion restaurants in our area. For that reason alone, I don’t think its Angus-beef siren song will pull me in for a spur of the moment dinner anytime soon. However, I am eager to see what inventive items will arrive next on the menu.

Who knows? My parents are in town next month. Maybe I’ll take them for a visit.