Vegan-friendly restaurants are a popular conversation in my office. While I’m a proud omnivore, I have four to five strict vegetarians on my team—and the number of veggie-curious grows daily.

So naturally, when weekend plans come up, the city’s countless plant-based dining options become a hot topic. The app HappyCow lists more than eighty-one vegetarian- or vegan-friendly restaurants in our area. So, yeah, we’ve got a lot of them. And even if an establishment isn’t explicitly vegan, we (or my coworkers at least) have come to expect that most buzzy restaurants will have at least one vegan dish on the menu.

Natural Oasis is neither new nor buzzy, but it gets a lot of heart emojis whenever it gets mentioned on the office Google Chat.

“Love that place,” one says.

“Easily the best meal I’ve had in Rochester,” says another. So, I had to check it out.

The bright teal building at 288 Monroe Avenue is home to many things, including a vegan restaurant and a store that sells bottles of apothecary-like herbs, vitamins, and supplements, while the second floor houses a yoga studio and an Ayurvedic herbalist practice. In 2005, after a health food cafe moved out of the space, owner Solomon Kebede saw an opportunity to introduce a healthy all-day Ethiopian vegan buffet to the city.

“My style is a Frankenstein of so many different themes,” Bovenzi says. The Italian dishes are inspired by his grandmother’s recipes and family dinners. The Indian influence came from him using Ayurvedic herbs and principles at home first, then transforming them into small plates that could work at a restaurant. 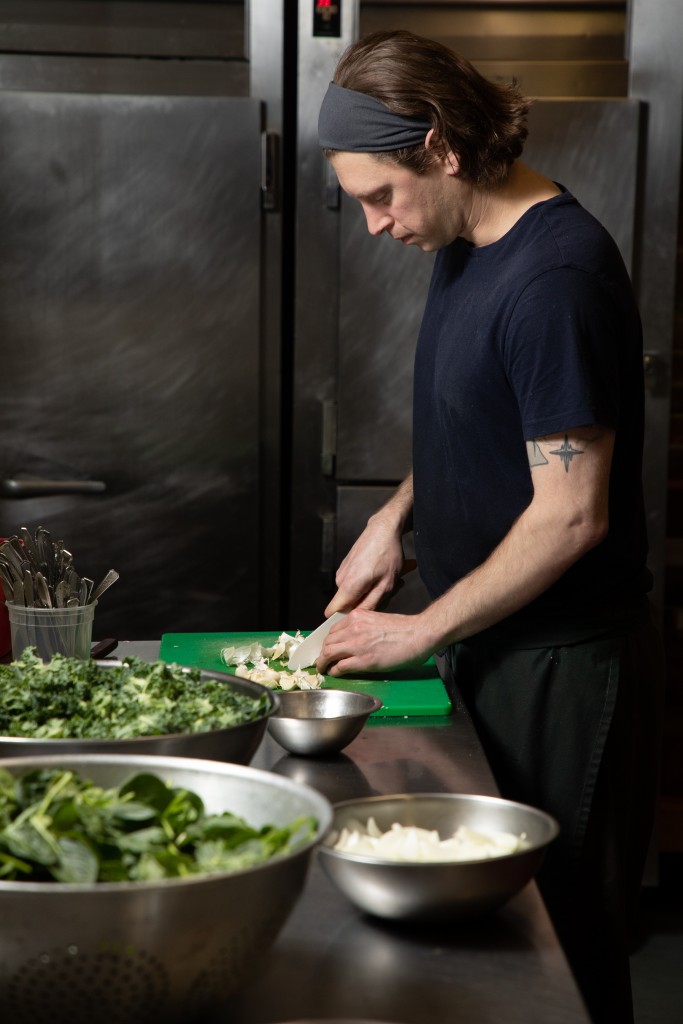 Bovenzi, who worked at Good Luck and the late 2Vine and staged at REDD’s original Michelin-starred location in Yountville, California, says he watched the shared-plate trend happening in other restaurants and hoped to create a similar feeling without the overwhelming portions.

“I wanted something where someone could sit down, order a bunch of food, not spend a lot of money, and not be overly full,” he says. Each dish on the menu, from the entrees to the steaming coconut milk chai, costs five dollars.

When I went to Natural Oasis to check out its dinner menu, I entered through the store, which is lined with shelves of spices and tinctures. The charmingly mismatched chairs in the dining room combined with the open kitchen reminded me of being invited to a friend’s house for dinner.

The owner, Kebede, warmly welcomed my husband and me in, helping us find a cozy table in the corner of the restaurant. Knowing the place was BYOB and didn’t have a corkage fee, we brought a bottle of wine from home that we were excited to try—and he was happy to bring out two glasses and a corkscrew.

We ordered one of nearly everything—and I left satisfied but not stuffed. Still, I had favorites.

Chai is a must, even if you bring your own libations. I recommend ordering it as soon as you sit down because the sweet cardamom brew is so lovely to drink while you’re figuring out what to eat. It’s unusual because it’s caffeine free and has a deliciously light coconut milk base. That said, the tea goes down easy, especially on a chilly night. 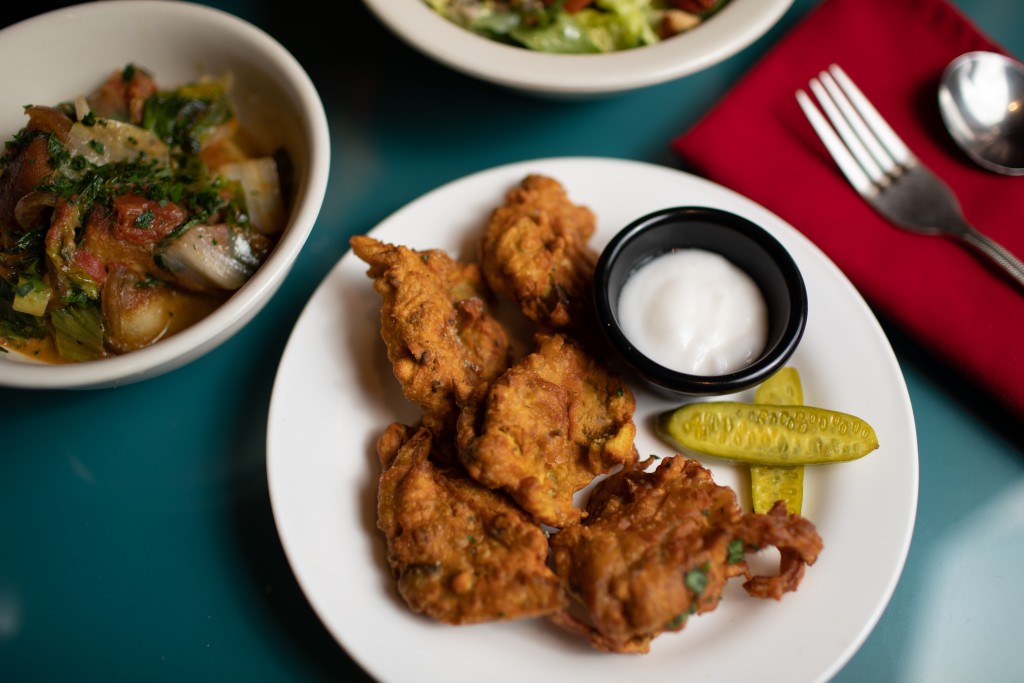 The bhajia, crispy roasted broccoli fritters battered in spiced chickpea flour, make a great starter, though everything here comes out as it’s prepared. They remind me of fritto misto without the greasy feel. A pile of them could feel indulgent, but with five per serving and a tangy coconut milk yogurt dipping sauce to balance out the fried richness, it’s the perfect amount.

Next was the romaine and arugula salad. Unlike a standard bed of greens with tomatoes and a vinaigrette, this dish showcases what Bovenzi does so well: the cherry tomatoes are oven roasted so that the bright, concentrated flavors burst in your mouth. In the place of croutons, cubes of tender-roasted sweet potatoes and diced almonds provide a divine textural contrast. I know, it’s a salad, but it’s a damn good one.

Another highlight is the gnocchi, a pillowy potato and rice dumpling that’s entirely gluten free and dairy free, which is a testament to the chef’s sorcery. It’s caramelized and dressed in crushed tomatoes and basil broth. There’s a touch of acid (maybe from the tomatoes or vinegar, it’s hard to say) that makes you want more. Other restaurants might offer a huge serving in a pasta bowl, which would be welcome in this case. At Natural Oasis, half a dozen come in a delicate fluted dish, but for five dollars, it’s a generous portion—and you can always order a second round if you feel like it. 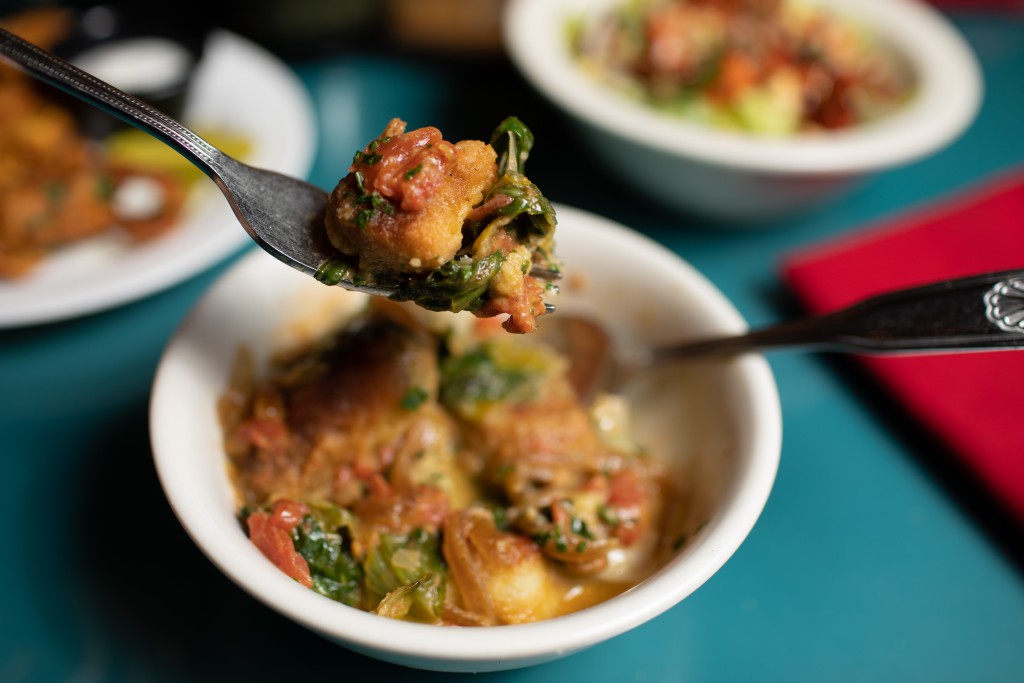 During the meal, Bovenzi comes out from the open kitchen periodically to check in with us. It further adds to the “friend’s house for dinner” vibe but with clearly a more exciting array of dishes.

I should mention that everything is vegan, though it’s tough to tell. There’s a noticeable absence of meat-focused entrees on the thirteen-item menu, but truth be told, my dining companion and I didn’t miss it.

I ask Bovenzi about this: How can he get two self-assured meat-eaters to come in, order a bunch of food, and genuinely enjoy themselves?

“It’s a blessing and a curse,” he says, laughing. He explains that after years of training at restaurants, his palate recognizes when a dish needs something extra: salt, fat, acid, crunchy, or creamy. This simple but precise principle of building dishes, in his mind, sets a restaurant dish apart from a meal he might cook at home. It’s also how he can adjust a ho-hum vegan dish into something that I would order a double portion of next time.

Another noticeable difference from other vegetarian spots is nothing pretends to be meat here. Some dishes have thoughtful plant-based substitutes, like the brown risotto. It’s a warm, satisfying dish with nuggets of roasted cauliflower and portobello mushrooms, and, in place of cream, it uses cashew cheese. Yet the nutty flavor is uniquely its own and doesn’t come off as imitation cream for one second.

Regardless of dietary preferences, guests will find the menu varied and inclusive. As well as being vegan, most dishes don’t have gluten, soy, or artificial animal products, and Bovenzi kindly accommodates special requests. “It’s very hard for people to not find something to eat if they come in,” he says.

Ten years ago, when Natural Oasis started serving this style of food, there weren’t many options for vegans, much less for people with celiac disease or health-conscious diners. Even with more choices available today, it’s rare to find a spot where you have complete freedom to order anything off the menu you please—without worry about the cost or the ingredients involved.

Natural Oasis is one such place. It’s not new, and it might feel like going over to a friend’s house, but the food is satisfying and completely original. There’s something for everyone to enjoy here—yes, even if you eat meat—so that gets a lot of heart emojis in my book.