The “I Am” muralists make their way to Rochester

“Never, ever be afraid to make some noise and get in good trouble, necessary trouble.”

Some revolutions evoke the sounds of rumbling feet, a call to action, and signs that declare a message. Other movements are quieter. They start small with a group of a few talented, like-minded, inspired people.

This is how a group of muralists began the “I Am” series.

A planned series of four works total, the “I Am” series is composed of three works thus far: “I Am a Man,” in Chicago; “I Am Singing,” in Louisville; and “I Am Speaking,” here in Rochester.”

Everyone on the team currently lives in Brooklyn (except for Dennis, who splits his time between Brooklyn and Chicago), but when asked what brought the crew to Rochester for the “I Am Speaking” mural, artist Darius Dennis replies, “it was a little bit of strategy, a lot of love, and some serendipity.” While fellow muralist and Rochester native Ephraim Gebre led the team back to his hometown of Rochester, Dennis also remarks that as the project began, Rochester’s “‘slept on’ radical history” began to unfold.

“I Am Speaking” resides on State Street in downtown Rochester. The mural represents a black-and-white photo of Georgia Representative John Lewis speaking to a crowd in Greenwood, Mississippi. With his hand poised for emphasis, you can see a man who is passionate about his work, and ready to speak his mind.

Throughout his life, Lewis was a civil rights activist and leader. He was a Freedom Rider and spoke as one of the “Big Six” leaders of the civil rights movement at the March on Washington in 1963. He was elected to Congress in 1986 and received the Presidential Medal of Freedom in 2011. His life was dedicated to a persistent fight for equal rights for all people, and this spirit is what the team captured through this project.

During the planning for the Rochester mural, the muralists were able to meet and form a relationship with the photographer of the “I Am Speaking” image, Danny Lyon. Not only was Lyon able to provide an original, high-resolution image, but he was also a best friend of John Lewis. This simplified the process, and the group became further enthused by Lyon’s desire to honor his friend’s memory.

The goal of the team was to leave the murals as a “tangible asset to the communities in which they exist,” says Dennis, and the result was a “loud, silent protest piece.”

The piece stands across from City Hall, at a property that the artists later found was likely a stop on the Underground Railroad. Not only that, but during one of Lewis’s marches he was badly beaten, and nuns from a Rochester parish came to his aid. These were all Rochester connections that no one knew of beforehand, which only emphasized the importance of the art and its purpose.

Sometimes, the importance of the work had an irony to it. In fact, the “I Am Singing” painting in Louisville began just as the city banned public protest. Of this piece, Dennis says:

“It’s a protest image from the great March on Washington being painted [with the city’s approval] while the city is shutting down protest. There was this moment of very pure confirmation that we were silently protesting. And I think that by the time that we arrive in Rochester it’s like ‘we’re painting a 3,000-square-foot nonviolent, very loud, silent protest piece.’ And for all conversational purposes about John Lewis … that sounds like some of the greatest trouble that he would’ve wanted us to get into.” 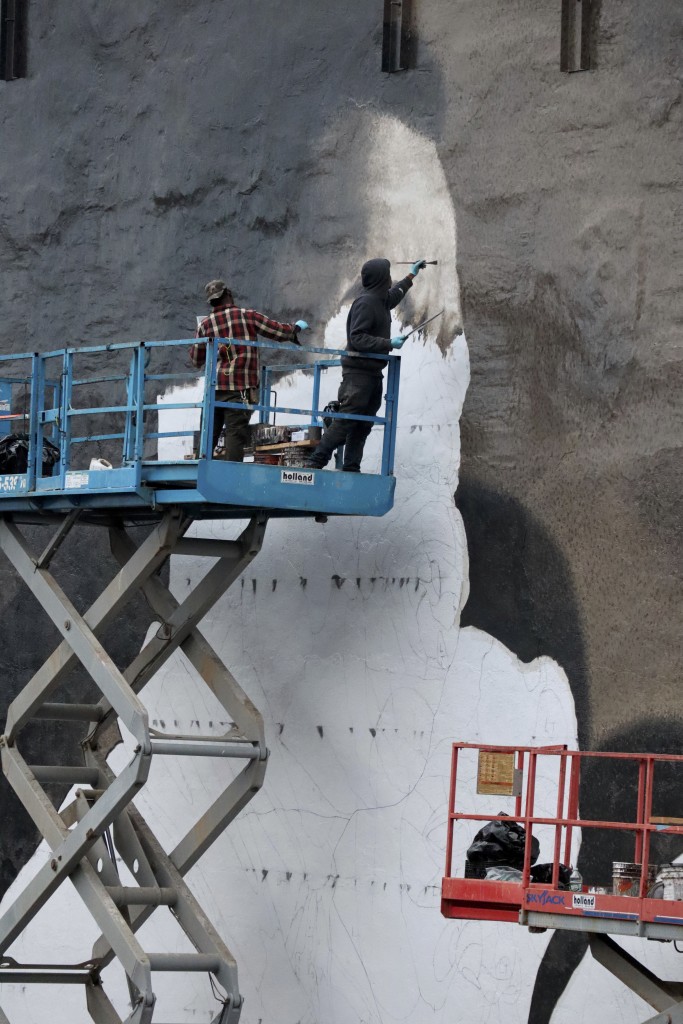 The hope of the “I Am” series team is to facilitate education around John Lewis’s legacy and provoke conversation. The muralists of the “I Am” series “want people from all walks of life to be able to interact with these works of art, regardless of socioeconomic background, class, race, and gender,” says Dennis.

As a public piece of art, this mural is accessible to all and provides Black representation at a museum-quality level. And as time progresses, it establishes the value of the paintings, starts conversations, and embodies John Lewis’s idea of “good and necessary trouble.”

An image that speaks louder than words themselves, the John Lewis mural by the muralists of the “I Am” series is now an invaluable part of the Rochester landscape.

As Dennis puts it, “There’s no way to pay enough homage … but we can try.”